In June last year, I wrote about Tony Abbott’s glowing endorsement of mass murder in Egypt. After General Abdel Fattah el-Sisi overthrew the democratically elected government of Egypt, he launched a series of massacres of non-violent protesters. Human Rights Watch, after producing a report on the Rab’a Massacre based on a year of investigation, concluded that this was probably the worst such massacre of all time. Worse than the Tiananmen Square massacre – and remember that China’s population is about 15 times bigger than Egypt’s.

To the best of my knowledge, no other media outlet thought to comment on Abbott’s warm embrace of a mass murderer. Or even on Abbott’s particular embrace of mass murder: in the words of Abbott: ‘I congratulated [Sisi] on the work that the new Government of Egypt had done to crack down on the Muslim Brotherhood’.

Abbott’s snuggling of democratic values continued with his lecture to Muslims on January 23 last week. When asked if there was a problem with Islam, he explained that he was really encouraged by a “devout Muslim… a very senior figure in the Arab world”, who “called for a religious revolution inside Islam”. Abbott explained: “I think that what everyone should be doing is listening to the sensible people inside the Islamic world, and there are more and more of them.” His favourite ‘devout Muslim’ and ‘senior figure’ in the Arab world is the ‘democratically elected leader of Egypt.’ Sisi.

That is, during a discussion of Charlie Hebdo cartoons, when discussing those who should “lighten up a bit”, (because in a democracy, people should have the right to say things other people don’t like) he suggested Muslims should learn from a tyrant whose security forces, Human Rights Watch comments, “have carried out widespread killings of more than 1,000 Egyptian protesters”. HRW notes that these are “the worst mass killings in Egypt’s modern history.”

In November 2014, Human Rights Watch observed that “Egyptian authorities have, by their own estimate, imprisoned at least 22,000 people since the July 2013 coup. The Egyptian Center for Economic and Social Rights, which has documented arrests by name and date, has put that number at 41,000.” 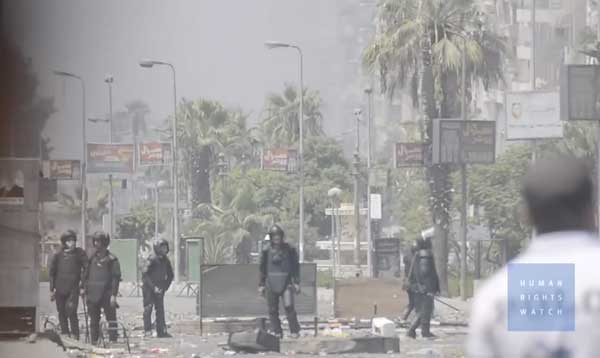 Reflecting Sisi’s passion for freedom of speech, after his coup “Egyptian authorities have greatly restricted nearly all space for dissent. The authorities have arrested thousands of people solely for being members of Morsy’s Muslim Brotherhood, as well as secular and leftist activists.”

Abbott literally urged intolerant Muslims to lighten up and take a page from Sisi’s book.

As it happens, Abbott is correct that his favourite devout Muslim won the elections in Egypt. As noted in an appalling ABC report – which saw nothing worth commenting on in these facts – Sisi won the elections in June 2014 with a truly impressive 96.9 per cent of votes. His election win also impressed the Saudi king, who celebrated that wonderful day for democracy in Egypt.

The ABC, reflecting perhaps the liberal end of the spectrum of commentary on the Egyptian tyrant, quoted zero critics of these impressively fair elections, blandly noting that “at least 1,400 people, mostly Islamists, were killed in street clashes” since the coup.

The ABC didn’t think it worth bothering their readers with trivialities like who the street clashes were with, or who was doing the killing.

This can be compared with the ABC’s report on the comparable ‘election’ of Bashar al-Assad. There, it straightforwardly reported critically on election figures it considered “unlikely”, quoted numerous critics of the elections, including the Australian and American governments.

In these elections, derided as a “big zero”, “meaningless” and so on, the ridiculous figure by which Assad supposedly won the election was… 88 per cent of the vote. Despite Assad’s best efforts at rigging phony elections, they paled beside the sheer overwhelming popularity of the tyrant of Egypt. Indeed, even the former dictator of Egypt, Hosni Mubarak, only managed 88.6 per cent of the vote back in 2005.

Even so, the major Australian media outlets have seen nothing interesting or noteworthy in Abbott’s generous character endorsement of Sisi, Sisi’s government and Sisi’s ‘democratic election’.

Nothing is considered striking in Abbott informing Muslims that they should learn from the dictator who imprisons and tortures tens of thousands, having murdered perhaps thousands already. Which is pretty revealing about Australian intellectual life.

More recently, Abbott has suffered a tragic loss. The tyrant of Saudi Arabia, King Abdullah bin Abdul Aziz died at the age of 90. Abbott immediately put out a press release, offering his “deepest condolences” to the people of Saudi Arabia on the loss of his beloved tyrant. 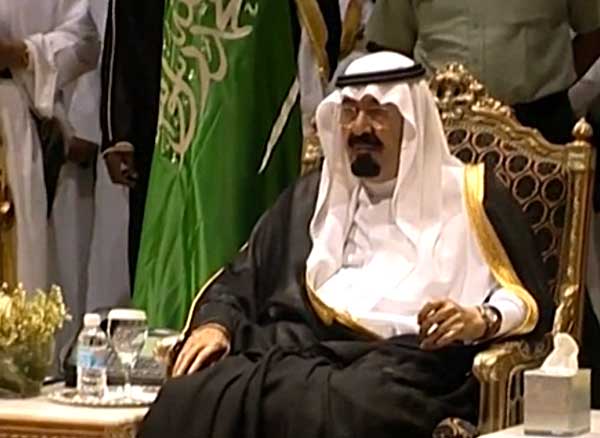 He explained that “King Abdullah was a key architect of Saudi Arabia’s economic and political development.” Sadly, Abbott only listed some of the King’s “many achievements”, before concluding that “The King was also a strong proponent of international interfaith dialogue.”

Let me put that differently. On January 23, Tony Abbott commented on several matters. One was to mourn the death of King Abdullah, praising his “many achievements” like supporting interfaith dialogue. Another was to tell Muslims that they should “lighten up” in the face of speech that they don’t like. And that a good role model for doing so is the dictator of Egypt, who has murdered over a thousand people for saying things he doesn’t like, and has imprisoned tens of thousands for crimes like belonging to organisations of which he disapproves.

Which all makes this kind of awkward: when ISIS published the punishments it had devised for various ‘crimes’, Middle East Eye compared their punishments to the Wahhabi fanatics in Saudi Arabia. Their infographic showed that many of the punishments are identical – such as death for blasphemy, stoning to death for ‘adultery’ when married, amputation of hand for stealing and so on.

As for King Abdullah’s supposed commitment to ‘interfaith dialogue’, we might recall when his government defined terrorism as “calling for atheist thought in any form, or calling into question the fundamentals of the Islamic religion on which this country is based”.

That was quite the day for liberty. Makes us proud to think that Abbott honoured this visionary of tolerant Islam by flying the flags at half-mast on government buildings to honour King Abdullah’s tragic death.

Associated Press estimated that Saudi Arabia beheaded 83 people last year. Yet for some reason, though we went to war to fight the ‘death cult’ of ISIS, with its fanatical interpretation of Islam and serial beheadings, our government honoured the murderous fanatic next door, who terrorised Saudi Arabia with one of the most oppressive and sexist governments on the planet.

No matter Saudi Arabia’s role in supporting and exporting terrorism around the world. They’re our friends.

It kind of boggles the mind. Tony Abbott solemnly lectures Muslims about the importance of freedom of speech, because a handful of them carried out a few atrocities in France. Yet Muslims and Muslim organisations around the world overwhelmingly condemned and opposed the murders of the cartoonists and at the kosher supermarket. Meanwhile, Abbott proudly has gone on record, endorsing the vicious and tyrannical murderers who oppress Saudi Arabia and Egypt. He praised the man who presided over the explicit equation of religious dissidence with terrorism as a proponent of ‘interfaith dialogue’. He praised a mass murderer of Muslims as the kind of person who would guide Islam in a properly reformist direction.

These realities are a striking inversion of the facile self-congratulations of the West in the wake of the Charlie Hebdo cartoons.

It is the Muslim world that overwhelmingly supports democratic values and opposes the slaughter of innocents.

It is our popularly elected government that celebrates the most extreme form of religious tyranny on the planet, and celebrates the mass murder of people fighting for freedom.

And it is our free press that shamelessly upholds the government’s version of a freedom-loving West, and a backwards Muslim world that needs to prove again and again that it opposes wanton murder.