Before last year's election Tony Abbott spent a great deal of time reassuring he would restore trust and honesty to the political system.

“You could trust us in opposition and you will be able to trust us in government,” he said in his Address to the 2013 Federal Coalition Campaign Launch on August 25. “This election is all about trust,” he reiterated.

Much has been made of the government’s major broken promises concerning education, health, pensions, the GST and public broadcasting. And then there’s Indigenous affairs, environment, foreign aid. It goes on.

An element of trust comes from demonstrating that all voices are heard, and considered. Not just those voices that agree with you. And here problems arise for NGOs. I wrote elsewhere about the coalition de-funding the Environmental Defender’s Office, an NGO that had supported dissenting voices.

Back in May when announcing it was stripping funding from the national peak body for youth affairs, the Australian Youth Affairs Coalition, Parliamentary Secretary to the Minister for Education Scott Ryan said:

The government is currently developing plans to consult with young Australians using a more focused and targeted approach.”

The italicisation is mine, all will be revealed. Have patience, this is a short piece. 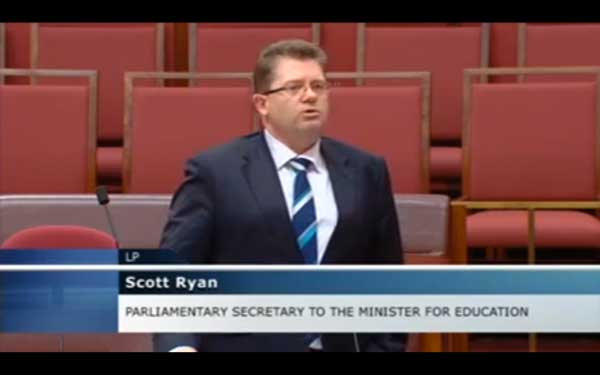 I wondered if the government might be planning to resort to a previous troubled model for youth consultation, the National Youth Roundtable, and sought information from the senator’s office about the nature of the “developing plans”. No information was available at that time. Nor was it known when information would be available.

AYAC chair Craig Comrie told me back then he didn’t think the government had any plans.

Along with my perspective on the problems of youth consultation, which are not the exclusive domain of conservative government’s, I wrote about this for New Matilda.

Regardless of personal views over government funding of peak bodies, an ordinary person would, I suspect, take at face value the senator’s advice that the government is “developing plans” to consult with young Australians. And then forget about it. Certainly the Coalition government would like that to be the case. Few governments like having their promises held to close scrutiny.

But I decided I would follow up, and six months after the original announcement seemed a reasonable time. Several requests for information concerning these plans were made by phone and email to the senator’s office over three weeks. Acknowledgements of my request were received, but no information was provided.

Which leads to the conclusion that there are no plans.

Just another contribution to the trust deficit. At a time when public support for democracy is falling this seems to me a serious problem.

It seems Comrie was right six months ago. He says now that neither he nor any of his colleagues in the youth sector, that he is aware of, have had any contact with the senator’s office since AYAC lost its funding.

Comrie says AYAC has taken stock of its new position in the world, evaluated what they are able to do, and carried on at a lesser level. Supporting state and territory youth peak bodies to have a greater role in national policy development has been a focus.

I finish by reading, with no tongue in cheek, between the senator’s lines:

The government is currently developing plans… (this may take some time),

…. using a more focused and targeted approach (to ignore those with a broad view, a national perspective. To be honest you see, we find this rather bothersome).