The next generation of young black warriors are so on fire they are able to attract 2,000 people to an Invasion Day rally… and even the nation’s leading shock jocks are struggling to catch up.

3AW’s Tom Elliott is the latest, who used Invasion Day to grill an Aboriginal activist about why she chose not to call herself “Australian”, and questioned whether she was then entitled to collect ‘benefits’ from the government.

This “benefit” comes despite the fact the high turnout at Invasion Day protests around the country underlined the frustration felt within Aboriginal communities in the midst of savage funding cuts to the black budget, assaults on land rights, rising Indigenous incarceration rates, and threats like the Barnett government’s plan to close down about 120 remote communities in Western Australia.

While media routinely ignore Invasion Day protests, with the exception of the 40th anniversary of the Tent Embassy in 2011 – where Aboriginal people cornered Prime Minister Julia Gillard and Opposition Leader Tony Abbott in a nearby restaurant – this year, it was hard to ignore the rallies.

The Melbourne rally attracted a large crowd, with Warriors of the Aboriginal Resistance (WAR) estimating 2,000 people and more than usual headlines after protestors ‘gate crashed’ an Australia Day parade. 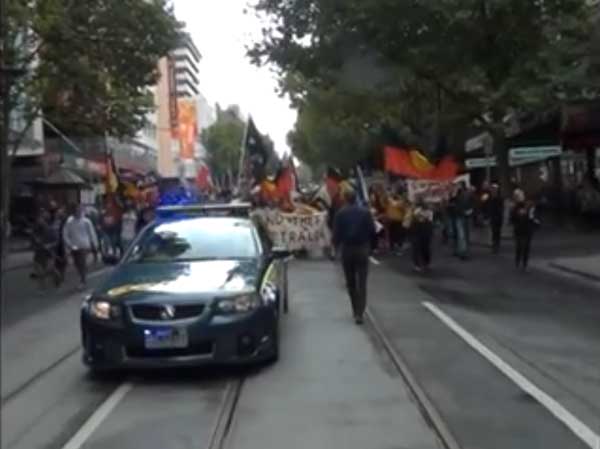 Gunnai and Gunditjmara woman Meriki Onus, a founding member of the newly formed WAR was an organiser of the Melbourne rally, and agreed that it was a watershed moment. She told New Matilda “it is time and everyone can feel it”.

Which is how 3AW’s Tom Elliott, in the station’s words came to ‘lock horns’ with Ms Onus on Survival Day.

While WAR and other First Nations activists are talking about giving back control over black affairs to Aboriginal people, land rights and de-colonisation, it seems 3AW’s line of questioning is stuck firmly in the past.

Mr Elliott began by asking Ms Onus about her identity.

“Do you regard yourself as an Australian,” he asked

“Really? Do you take any benefits from the Australian government,” Mr Elliott responded.

“Why would I do that? I think that question is irrelevant.”

“No, because if you’re not Australian I don’t think you should be benefiting from the Australian government,” Mr Elliott said.

To which Ms Onus replied: “You don’t know what I do for a living and I’m not going to entertain this conversation. Because you are contributing to racist assumptions that we are all welfare cheats.”

Ironically, this morning when New Matilda interviewed Ms Onus, she was on her way to work.

Elliott also asked whether WAR wanted a separate nation for Aboriginal people. He told Ms Onus that like his Cornish ancestors, Aboriginal cultures change – otherwise why would Ms Onus be speaking English?

Mr Elliott also questioned Ms Onus repeatedly over whether WAR wanted non-Indigenous people to leave the country, and whether they wanted a separate nation with separate laws. He also wondered out loud whether an Aboriginal nation would be able to govern itself properly.

You can listen to the entire interview here:

Ms Onus told New Matilda media played a key role in dehumanising Aboriginal people. It helped explain the importance of black media, and the need for new publications like the Black Nations Rising newspaper, which recently printed its first edition.

“Australia was built on a notion that we are sub human… and a lot of the mainstream media and governments work to that, that we are incapable or inferior or too subhuman to govern ourselves. I wanted to highlight that the notion we can’t govern our own affairs is fundamentally racist. I think that drives a lot of politics and media,” Ms Onus told New Matilda.

“Constantly dehumanising us in the media has a profound effect on where we are today and I’d like to challenge those perceptions.”

Ms Onus said a better conversation would have been around sovereignty, treaty and land rights.

“I think maybe native title has tainted that land rights fight. You can’t ask for land rights from our oppressor. We can’t appeal to their conscience. In a sense we need to take our land rights.”

She says WAR are spearheading a campaign to move back to country, and that the high numbers of people on the streets for Invasion Day showed that times are changing.

“I think people are waking up all around the world, and Aboriginal people are a part of that.

“…Even middle class blackfellas can blatantly see that we can sit at the white man’s table, and we can eat like him, but the reality is we are still dealing with a serious act of genocide… it doesn’t matter how well you are doing, we still have to heal the past and it’s becoming more obvious than ever.”