Sea Shepherd – the globally renowned environmental organisation with its southern base in Australia – has just upped the ante in the fight to prevent illegal whaling with an announcement yesterday that construction will begin immediately on a state-of-the-art vessel aimed squarely at frustrating Japan’s ongoing attempts to strip our ocean of whales.

The ship is as scary looking as it is technologically advanced, and will be built in Vietnam before being based at Sea Shepherd’s Williamstown port in Victoria, for operations during the 2016-17 whaling season.

The announcement follows a donation worth 8.3 million Euros ($11.2 million AUD) from the postcode lotteries in the Netherlands, Sweden and the United Kingdom (the Dutch Postcode Lottery contributed a whopping 7.5 million Euros).

Adam Burling, spokesperson for Sea Shepherd Australia told New Matilda it was a “game changer” in the defence of the ocean’s gentle giants.

“It’s a huge breakthrough for Sea Shepherd,” Burling said. “Never in our whole history have we been able to get access to a new ship – we’ve just never been able to afford it.

“Most of the ships we’ve operated have been pretty old, so this is a game changer for us. It will not only add to our fleet, but spearhead the campaign to stop whaling in the southern ocean.”

Currently Sea Shepherd has six ships in its international fleet. Three of those are based in Australia – the Sam Simon, the Steve Irwin and the Bob Barker.

All three ships have served Sea Shepherd well, and will continue their operations. But the newly planned ship will take Sea Shepherd’s activism – and capacity – to a whole new level.

“The big thing about this ship is the speed, and the technology that will come with it,” said Burling.

“Both in terms of their maritime history, and ship building, Japan is world renowned and they have state-of-the-art fleets.

“We’ve been up against ships that are faster and better equipped than ours, and while we’ve still achieved incredible results with an older fleet, this changes everything.”

Sea Shepherd describes the Southern Ocean as “one of the last regions of untouched natural beauty on the planet”. It’s been fighting illegal whaling and fishing around Antarctica since 2002, and has saved more than 5,000 whales from slaughter.

The whaling season officially operates from December until early March, but this season has seen a break, after Japan’s defeat in the International Court of Justice last year. Burling says the break is only a brief hiatus.

Japan is preparing a new submission to the International Whaling Commission, and again arguing that it’s whaling is for scientific purposes (as in, scientifically speaking, this whale meat is delicious!’) – the same claim rejected by the ICJ. Its latest proposal indicates Japan intends to continue whaling for at least another decade.

In fact, the Japanese fleet is already back in the Southern Ocean, planning its next hunt.

“They’re down there now doing ‘non lethal research’… They’re looking at whale migratory patterns and krill movements, so that they can come back next year,” said Burling.

“In the words of Captain Peter Hammarstedt, (in charge of Sea Shepherd’s global fleet and captain of the Bob Barker) they’re basically bank robbers casing out the bank for the robbery they’re planning next year.”

But notwithstanding a break in the whale hunt, there’s never really any lull for Sea Shepherd in its fight to protect our oceans – this year the organisation launched Operation Ice Fish, which is specifically targeting illegal fishing operations.

“Sadly, there’s no shortage of work for Sea Shepherd in terms of policing international maritime law, and taking on some of the most destructive activities on the planet against the ocean and its creatures,” Burling said.

For the last 40 days, the Bob Barker has been trailing an Interpol-wanted vessel named ‘Thunder’, operating in waters south of Australia. It’s one of six known vessels currently suspected of illegal fishing in the southern ocean. The target of the poachers is the Patagonian Toothfish. 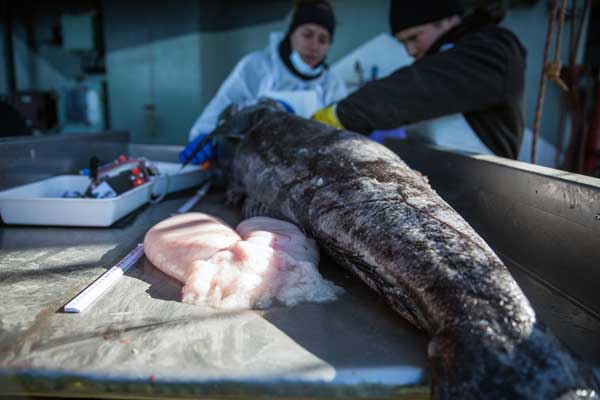 Bob Barker interrupted the hunt by the Thunder, and forced the crew to dump more than 45 kilometres of illegal gill nets (which contained more than $2 million worth of Toothfish). A second Sea Shepherd ship, the Sam Simon, joined the operation to clean up the nets, while the Bob Barker continues to shadow the vessel, which has ceased fishing for now.

The Sam Simon is also involved in the shadowing of three vessels spotted by the New Zealand Navy two weeks ago near the Ross Sea (off the coast of Antarctica). The NZ Navy wasn’t able to board or arrest the crews, so the Sam Simon is expected to take over the monitoring of the vessels, and to interfere with any attempts to fish.

A bit about Sea Shepherd and its Fleet

• Sam Simon is a former Japanese fisheries vessel. It was bought ‘undercover’ by Sea Shepherd from the Japanese, who expected the ship to be converted and used a luxury yacht. It’s named after one of the original creators of the cartoon, The Simpsons.

• Bob Barker is a former Norwegian whaling ship (an icebreaker), named after the American game show host and philanthropist. Barker’s wife donated money for a helicopter to operate from the ship’s deck.

• All of the ships are ice class vessels, however the Bob Barker is particularly suited to the Southern Ocean, with a reinforced hull.

• Between 30 and 40 crew volunteer on each ship during operations. In the last campaign launched by Sea Shepherd from its Australian base, 120 people were active from 21 different nations, although half the crew were Australians.

• Much of the funding for Sea Shepherd in Australia – including its Antarctic operations – comes from smaller donations from Australian families. You can help support the work of Sea Shepherd by visiting their site here.