The siege in Martin Place has shocked those of us in Sydney who know Martin Place well. I do my practical legal training three days a week at a building within the “exclusion zone”. Even if Australians have been warned of the dangers of terrorist threats, few of us expect such things to occur so nearby.

There has been saturation media coverage of the siege. Not much of it has been particularly enlightening or helpful. People on social media have shown the many sides of humanity. Some have brought warmth and love to Muslims afraid of what this will mean for them, through the #illridewithyou hashtag. Others have posted appalling things like calling for the deportation or mass murder of Muslims. Some posted recklessly on the Facebook profiles of hostages, disregarding the explicit wishes of the family of the hostages and the police.

The gunman – Man Haron Monis – appears to have been somewhat incompetent as a hostage taker and would-be terrorist. Several hostages were able to escape. However moderate he thought his demands were – such as demanding an ISIS flag be brought to him – he doesn’t appear to have had any of them granted to him. Though he wanted his attack to be known as one by ISIS, it seems that he was unable to procure an ISIS flag by himself.

As Patrick Cockburn notes in his book on ISIS, a jihadi slogan is “Half of Jihad is Media”. Monis did not distinguish himself here either. He was unable to get his message out, and appears to have had no collaborators or supporters. His attempts to leverage media gains from his hostages came to nothing. 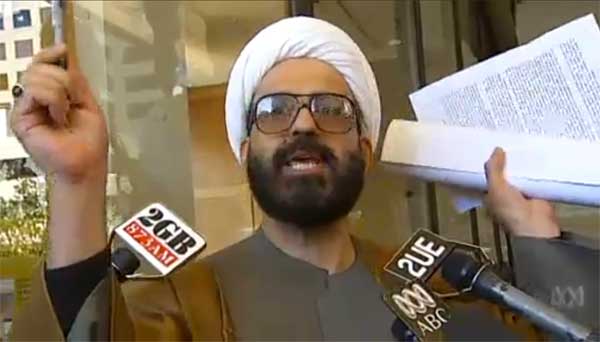 Even his attempt to terrify people in Sydney had limited success. Whilst no-one can doubt the awfulness of the ordeal of the hostages, other Sydney-siders swung by Martin Place to keep an eye on what was happening. Most of Sydney has not reacted with terror. This may be related to the scale of the siege. It was one gunman in a small store. The situation was quickly contained by the police.

When he sought to convey a threat of bombs throughout the city, the police sensibly recognised this as empty bluff. As hostages repeatedly escaped their tormentor to safety, it became clear that the danger was confined within the store.

The first and foremost victims of the siege are the hostages, particularly those who were killed, and then those who were injured. Many would have avoided the fate of the hostages by the narrowest of luck. Whether they showed up to work late, missed a train, got their coffee early, or on a whim decided to eat somewhere else, there is a broader circle of those who were close to what happened who will be shaken by their own personal “Imagine if I’d just” stories.

Since his death, we have learned more about the gunman. Monis has had a long record of being in the public eye. Kind of like our own Westboro Baptist Church, he wrote letters to the families of Australian soldiers killed in Afghanistan. In one he described a dead soldier as “the son to a dirty pig”.

Unlike the Westboro Baptist Church, whose “God hates fags” picketing have been protected by the first amendment in the US, Monis was sentenced to 300 hours of community service and a two-year good behaviour bond for the letters. In November last year, he was charged with being an accessory to the murder of his ex-wife, whilst his more recent girlfriend was charged with the actual murder. The Sydney Morning Herald reported that she also helped him send his letters.

In April this year, Monis was charged with sexually assaulting a woman in 2002. In October, 40 more charges of sexual and indecent assault were leveled against Monis. Strangely enough for someone claiming to practice black magic, he claimed this was a witch-hunt against him.

Monis claimed to be an expert in such arts as numerology, black magic, astrology, and used these talents to practice spiritual healing. It is claimed that he took the opportunity given to him by his sessions in quackery to molest women.

Monis once claimed to be a very senior Shi’ite religious cleric – an Ayatollah. Australian Shi’ites dismissed his claims, with Australia’s most senior Shi’ite leader urging the police to investigate him. Monis calling himself an Ayatollah is akin to a man identifying himself as an archbishop, and is suggestive of the kind of delusions under which he laboured, or sought to impose on others.

According to the Murdoch press Monis’s former lawyer Manny Conditsis said his client often said he ‘loved Australia’, but fought furiously against our soldiers’ presence in Afghanistan in Iraq.

“He had an incredible passion for lobbying against the killing of innocent children — what he would call unjust wars”, Mr Conditsis said.

The day before the Martin Place siege, he posted a message to the world. Monis reportedly complained about Australian “terrorism” and vowed to fight the “oppression and terrorism of (the) USA and its allies including (the) UK and Australia”.

In short, when one wants to understand why Monis acted as he did, it should be clear that he represented no-one but himself: an angry crank, a quack, a man who probably had issues with mental health, who may have been a sexual assaulter, and wound up a dead murderer. He spent years campaigning against the deaths of innocent civilians in Iraq and Afghanistan, and wound up a sympathiser of a barbaric group with its own bloody record of atrocities. Monis claimed to oppose the murder of innocents, before murdering innocent people

As Monis was Muslim, and he put up a flag with the Shehada on it, there will be some who will claim that Islam caused this. Such a perspective reeks of what the late Middle East scholar Maxime Rodinson called theologocentrism – the attempt to explain everything that happens in relation to Muslims solely by reference to religion.

Yet Islam hardly demands that adherents adhere to numerology and black magic, or that they use such pretexts to engage in sexual assault. Furthermore, the major Muslim organisations all denounced his actions before anyone even knew who he was or why he was doing it.

It’s notable that Monis’s religious views changed radically in the days before his death. Whereas he used to be a Shi’ite Muslim, in December he denounced Shi’ites with the derogatory term “rafidis”, announcing that he is “now” a Muslim.

Evidently, in his last days he looked with scorn upon his earlier views – the days when he considered himself an Ayatollah. As his religious views changed, there was still a kind of consistency in the kind of political concerns he expressed. What really changed was style in which he did so, as he no longer limited himself to symbolic actions and hurtful words.

Like many other Australians, Monis opposed the wars in Iraq and Afghanistan. Like some other Australians, he very vehemently opposed them. Like not many others, he engaged in reckless and poorly thought out actions that didn’t help his cause. More recently, he decided to embrace war, on the other side to Australia, and offered his sympathies to ISIS. He was completely isolated in the Muslim community throughout his years in the public eye, whether as a Shi’ite or a Sunni, before and after he embraced ISIS.

Monis is not the first deluded fanatic to kill innocent people in the name of religion. He will not be the last. It is up to us to decide how seriously we take his claims about his religious credentials.

All the evidence suggests that that is the kind of respect he does not deserve. If Australians treat his behaviour as the actions of a representative Muslim, rather than as those of a criminal fanatic, then his crime may claim more victims in the future.