The Martin Place siege has proven to be less of a galvanising force for the far right than they may have hoped for. On the one hand, on social media the Australian Defence League – one of the principal, if minor, movements to have formed on the basis of Islamophobia – gathered many more thousands of likes on Facebook and a much wider readership. On the other hand, the week has seen one of its leading Facebook pages removed (for making violent threats towards Muslims) and two meetings of the group have been cancelled following community pressure.

Ralph Cerminara, the self-proclaimed President of the ADL, was at Martin Place on Monday during the course of the siege, and later uploaded footage of his intervention to his YouTube channel.

Police instructed him to leave the area.

In terms of the response on social media, in addition to the #illridewithyou campaign, much community anger was directed at one ADL supporter in particular, Adam Mercer, who in response to the siege published a step-by-step guide on an ADL Facebook page on how to harass and assault Muslim women on public transport without – supposedly – getting caught.

This and other examples of misogynist, racist and Islamophobic abuse by ADL members and supporters presumably played some role in hastening Facebook’s decision to remove Cerminara’s ADL page – it having being flagged as racist and abusive on numerous occasions previously (to no apparent effect).

Following his YouTube diatribe, Cerminara somewhat ambitiously declared that the ADL would march on Lakemba if anyone were harmed as a result of the siege; a promise echoed in a video he posted to YouTube in September of a Cronulla-style pogrom against Muslims.

“Another Cronulla is coming, and I can't wait until it does. Because this time, we're going to show you who's boss,” he warned.

Despite his worst intentions, no march or rally has taken place – a good thing, one suspects, both for the local Muslim community as well as the ADL.

In any event, the ADL then announced that it would be holding a public meeting at the Marrickville Police Citizens Youth Clubs on Saturday, December 20, to discuss ‘The Consequences of Islam in Australia and the World’.

In response to public outcry, within the space of less than 24 hours the PCYC cancelled the booking, issuing a statement reading: “We have just been made aware of this alleged meeting which was scheduled to occur this Saturday. The booking was made by an individual who did not disclose the nature of the event. We have since taken swift action. Please be assured that under no circumstances will this meeting take place at our venue at any time.”

Similarly, the Perth branch of the ADL had scheduled a series of meetings at 43 Below Bar & Restaurant. According to the ADL, however, and again in response to a public outcry, it now appears that management has refused to allow the meetings to proceed.

On Thursday, Anonymous Australia entered the fray, declaring in a video posted to YouTube that “Your kind of bigotry will never be tolerated”. 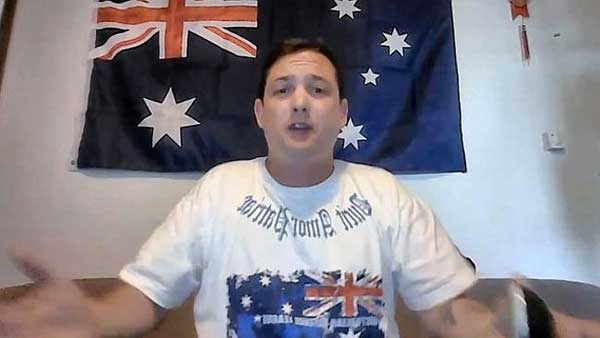 The video intones: “… And a warning to a very few: the ADL and their supporters who seek to inflame hatred and violence based on bigotry and an ideology akin to the Ku Klux Klan”; a reference, perhaps, to the campaign by Anonymous in the US following the KKK’s intervention on the side of the police during the (ongoing) public outcry over the police murder of Michael Brown in Ferguson in August.

Further, “To those using social media to espouse hatred and violence by seeking to separate families based on lies, we are watching. We will expose you – to your family, to your friends, your employer and fellow workmates.”

The Monday prior to the siege witnessed protest and counter-protest in Penrith at a council meeting to discuss the construction of a Muslim community centre at Kemps Creek.

In addition to angry locals, the range of forces opposed to the development included the ADL, Australia First Party (AFP), Party for Freedom and neo-Nazi skinhead group Squadron 88 (S88), a tiny but potentially dangerous group which had previously distributed anti-Semitic tracts around Sydney and which has appointed inveterate neo-Nazi activist Ross ‘The Skull’ May as its titular head.

Worryingly, prior to the December 8 meeting, May had declared in a S88 YouTube video that those opposed to the community centre should be prepared to inflict ‘violence’ upon its supporters.

In any event, violence was largely avoided, both because of a large police presence but also the steadfastness of anti-fascists and local Muslims. Later, a Sydney-based neo-Nazi expressed his extreme disappointment that members of the Newcastle branch of the AFP were unable to corner a fleeing protester (a presumed anarchist and anti-fascist) in order to beat him senseless, further opining that “all that’s left … is to replace words with fists and weapons and render their side null and void”.

The ADL promoted the Penrith protest by pitting itself against ‘Islam, multiculturalism and the foreign domination of our land’; a project of the “evil anarcho-pinko-anarchist-islamic cabal of dirt” and the ‘Islamists’ supposedly responsible for developing the community centre (in reality, the Muhammadi Welfare Association of Australia).

One member of the ADL surveilled the assembled anti-fascists, with the material then being distributed among local neo-Nazis, including Squadron 88, who used it in an attempt to identify counter-protesters by way of the Stormfront website.

In the short-term, how the far right will respond to their seeming inability to translate hatred of Muslims into a more solid political presence is not clear; mimicking the popularity the ‘pinstriped Nazis’ of Germany will hopefully remain a distant dream.