Techno-centrism, techno-imperialism/colonialism, digital chauvinism – call it what you will – today’s universities are in the grip of planners and administrators who insist that the old didactic order is fast giving way to a new era of virtual higher education.

Online platforms, they insist, are providing easy access, anywhere, anytime, to electronic portals that connect students to every facet of the educational experience: study materials, textbooks, lectures, tutorials, libraries and support services. No need for students to waste their time travelling to and from campus, or having to sit in drab lecture theatres and overcrowded tutorial rooms.

No; the digital revolution is takeaway education 24/7: a speedy, flexible world of hyper-connectivity far removed from the sterility of campus-based learning. It’s all part of the much heralded ‘knowledge economy’ where ‘higher education providers’ peddle educational ‘products’ to ‘consumers’ through a network of access points in a multiplicity of private and public domains.

The once revered physical campus, replete with expensive infrastructure, unused land and troublesome staff is slowly but surely being superseded by an educational experience that is more fluid, nuanced and tailored to the complex needs of the twenty-first century student-consumer.

To accommodate the demands of the techno-savvy consumer, universities have sought to create products that can be ‘delivered’ instantaneously to a mass market of infinite possibilities. Some senior university administrators –credentialised beneficiaries of on-campus education – are at the forefront of this revolution, advocating the end of the physical campus, at least a centre of concentrated student learning.

The most radical exponent of this view is former social work academic and vice chancellor of University of New England, and now go-it-alone consultant, Professor Jim Barber.

In a 2014 homily on ABC National Radio’s Occam’s Razor, Professor Barber asserted that, “the distinction between virtual and material will disappear altogether. This is because all surfaces, including the skin, are potential interface points enabling users to issue and receive computer commands using their own body parts as touchpads.”

This intriguing futuristic scenario, complete with unidentified body parts, infers that there’s no longer any need for expensive physical resources found on most traditional campuses. In a new era of cyber functionality, insists Barber, the fully online university would be “free of all the capital constraints now imposed on institutions and could deliver education at a much lower price”.

Australian National University vice chancellor, Professor Ian Young, is similarly enthusiastic about the brave new world of hyper connectivity, proclaiming that the physical campus, “will more and more become an environment of research rather than teaching”. Perhaps mindful of potential criticism that campuses may become ghost towns, or sold off for housing development (which, by the way, is already happening), Professor Young notes that campuses would continue to offer “residential experiences” to those students who can afford such accommodation – the rest would simply log-in from afar. 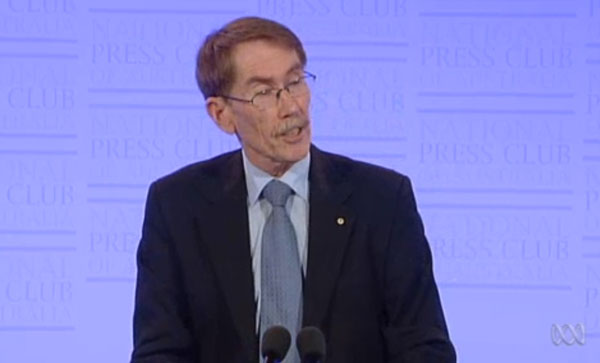 The predicted emptying out of university campuses, or their transformation into glorified research centres, has been broadly welcomed by a new crop of non-digitally educated politicians and university chiefs who see in online education the opportunity to tap into potentially lucrative markets in Asia and beyond, adding to the current $16 billion annual income generated by the enrolment of international students.

Interestingly, opposition to this teleological path is greeted with derision by digital exponents, including Professor Young who, in October 2012, told a University of Melbourne conference that “high-volume education’ would continue moving online and large lectures would begin to disappear”. “Why,” asks Professor Young, “would students come along and… sit in a passive lecture with 300 other students when they can access material online themselves,” adding that, “it makes no sense to me”.

Barber on the other hand is less concerned with matters of product delivery than capital expenditure, insisting that university managers “ought to stop lumbering their university balance sheets with superfluous lecture theatres and burdensome depreciation costs”.

In any case, says Professor Barber, the increased use of mobile, video and various digital outlets will render obsolete the traditional reliance on campus-based learning. To be sure, some laboratory work and other activities may include a limited student presence on campus, but this is largely an anachronistic sideshow. The “big winners” from all this, says Professor Barber, are the disadvantaged who can now gravitate “to mobile devices bringing distance education within reach”.

This insistent drive towards electronic supremacy – exemplified most spectacularly by the rise of Massive Open Online Courses (MOOCs) – has led to a new hegemonic order in which the fetish for technological innovation seems to be driving education, rather than the other way round.

While the majority of students now experience various combinations of face-to-face and online learning – otherwise referred to as ‘convergent’, ‘mixed mode’, ‘blended’ and ‘hybrid’ learning – the push to a dominant online future seems unstoppable.

According to Young and Barber, the task now is to recognise and respond to the demand for online education – after all, that’s where the mass market of 21st century higher education resides, and, of course, it’s where the money is.

Institutional incursions into these rapidly expanding global markets have been justified largely on the grounds of ‘consumer sovereignty’ and the attendant market-based notions of ‘choice’ and ‘flexibility’. This is particularly evident in the commercial narratives currently being spun by university marketing divisions and the companies with which they are associated.

Take for example an ‘advertising feature’ entitled ‘Universities of the future’ which appeared in a November issue of The Australian. Two articles (which at least have the look of detached journalism) are included in a full page of the paper’s higher education section: one headed ‘Technology turns the tertiary focus towards external study’, and the other ‘Virtual approach is the new reality for staff and students’.

Both extol the virtues of ‘flexible delivery’ and the fact that students can now “join interactive learning sessions from any location”. Ironically, the latter claim is made beneath a photograph of what looks suspiciously like a traditional lecture theatre full of heads-down students.

In one of the articles we’re told that Deakin University has built its last lecture theatre and that it’s now a matter of “severing the physical ties with the classroom”. Chris Warren, director of infrastructure services at Deakin, highlights the wonders of the ‘virtual lecture theatre’ where students can log in from any location. Students, he adds, can make use of two-way video services to make the educational experience even more ‘immersive’. All that is required is a web browser which enables a ‘web-based interface’ to be accessed through a mobile phone, notebook PC or tablet.

Cyber innovator, Brett Looney (sic), insists that the recording of lectures, turning speech into text, and interfacing with mobile phones and PCs is making for a hyper connected educational experience which, he claims, “is an interactive learning session that is similar to what they would have experienced had they all been in the same room”. But there are other benefits too: the gradual replacement of textbooks with computerised information; closer staff monitoring of student learning; and the development of social networking platforms that help bind people together.

This is a bold, stirring vision of an electronic future, delivered with much gusto and the triumphalist certainty of a better tomorrow. As if to support this claim, another full-page ‘advertising feature’ appeared in yet another November issue of The Australian. As with the first iteration, representatives from companies like Polycom, Microsoft Australia, and Cisco are wheeled out to celebrate the wonders of the cyber age. After more talk of flexibility and inter-connectivity, we’re informed that “advances in science such as holograms and virtual science will make the online experience even more immersive and valuable for both students and teachers” – assuming of course that the latter have not been replaced by robots.

As you might expect in a so-called advertising feature, there is no discussion of possible problems associated with the electronic world. Instead, extraordinary claims are made about its ability to replicate existing relations through technological mediums designed for that very purpose.

And yet, as has been noted in numerous research reports and associated commentary, the world of virtual education is certainly not without its glitches.

First, as noted by the US-based Campaign for the Future of Higher Education, and Australia’s own Centre for the Study of Higher Education, Open Universities Australia and the Department of Education, fully online students tend to rank among the most ‘at risk’ of all enrollees in terms of dropping out. Astonishingly, the dropout rate among MOOCs students hovers in some cases around 90 per cent. But the situation in less grandiose online courses is also worrying.

In July 2014 the Department of Education released figures showing that Swinburne University of Technology’s dropout rate increased from a little under 14 per cent in 2011 to over 21 per cent in 2012.

The blame for this was attributed to the massive increase in online students studying through Swinbunre Online. Quite why this should be the case is difficult to discern, but undoubtedly has much to do with the boredom, isolation and general disillusionment with the cyber experience, not to mention the fact, as pointed out by Monash University’s Dr Simon Cooper, that MOOCs (and other online courses) often replicate some very traditional educational practices, many of them alarmingly didactic.

Third, as my own research indicates, students are also telling us that there are many secondary learning benefits to be gained from direct interaction, including a heighted understanding of the benefits of co-present learning and the complexities of human communication.

Fourth, cultural differences in terms of communication practices suggest that online education may not work for significant numbers of students. Touch, eye contact, gestures and all the signs and symbols of the interactive human experience cannot be adequately captured through an electronic medium.

Fifth, despite Professor Young’s preferred vision, many students continue to enjoy a presence on campus, attending lectures, socialising and even carousing with others. Why does he seek to deny today’s students the experiences to which he was privy?

Sixth, as a number of student experience surveys indicate, growing numbers of students do not identify with their institutions, feel lonely, isolated and marginalised – feelings only intensified by the online experience.

Additionally, as the same surveys note, and as Sally Kift, deputy vice-chancellor of James Cook University recently acknowledged, there remain deep inequities in the provision of and access to online and other technologies. Not everyone can log into the globalised cyber environment.

From the student’s perspective, the ‘choice’ between online and face-to-face education — if indeed there is one — is largely pragmatic (fitting into work-life balance and career progression scenarios), or simply a matter of personal preference or taste.

While this sort of educational experience may be more ‘convenient’ for students, it frequently generates more rather than less work for academics, and creates a culture of learning that is often transitory rather than ‘immersive’.

In lurching too eagerly toward a cyber future, university chiefs may have conveniently forgotten the many joys and benefits that derive from truly co-present learning.

It’s time to pause and think.