The overwhelming majority of asylum seekers processed in offshore centres are found to be genuine refugees, new Customs figures confirm.

A monthly review of the claims of asylum seekers detained on Manus Island and Nauru shows that 71 per cent assessed so far have had positive determinations. 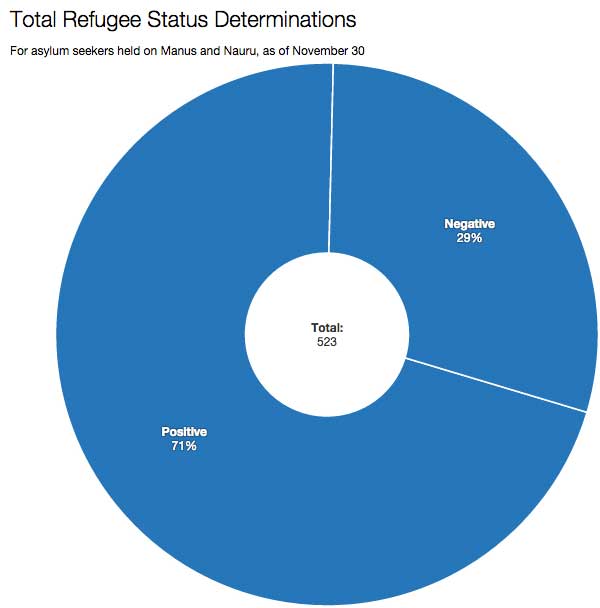 Of the 381 determinations handed down to asylum seeker held on Nauru, 299 were returned with a positive assessment.

Asylum seekers held on Manus Island did not fare as well as those on Nauru, with an even split between positive and negative assessments. Unlike on Nauru, these are marked as “interim” determinations.

Since August 2013, all asylum seekers attempting to come to Australia by boat have been sent either to PNG or Nauru, but processing has been slow since then. In February, Iranian asylum seeker Reza Barati was murdered in the Manus camp, while another young man, Hamid Kehazaei, died as a result of a minor injury.

After the second death, doctors warned providing good care on Manus was impossible and that more deaths would likely result from the poor conditions in the camp.

Nauru has also been derided as an unsafe location for refugees to be sent, with great issues faced by those in detention as well as those found to be refugees and released into the community.

Department figures show there were still 2,040 people held on Nauru and Manus as of October 30.

The reason for the difference in successful determination outcomes in the two offshore centres is unclear. All the asylum seekers interned on Manus Island are single men, whereas Nauru holds women and children as well.

The future of those found to be genuine refugees is far from clear. Detainees processed on Nauru will only be accommodated by five years, at which point Australia will have to find a third country to resettle them.

Men processed in the Manus centre are supposed to be settled in Papua New Guinea but so far only a very small number have been offered that opportunity.

There is significant domestic opposition to refugee settlement in both countries.