I haven’t followed the events in Ferguson very closely. Professor Larissa Behrendt, in the Guardian, and my colleague Amy McQuire at New Matilda have noted that there is more than enough injustice here for Australians to get angry about.

The royal commission found that the deaths were not “the product of deliberate violence or brutality by police or prison officers.” However, “in many cases death was contributed to by system failures or absence of due care.” As royal commissioner Hal Wootten later wrote, “nearly all the police and coronial investigations had been derisory”.

Since then, if there has been change, it has mostly been for the worse. In 1989, the Aboriginal adult imprisonment rate was 1,465 per 100,000 Aboriginal persons, making for a disproportionate rate of 15-1 – that is, Aboriginal people are 15 times more likely to be jailed than non Aboriginal people. As Larissa Behrendt notes, since the royal commission, “340 Indigenous people have died in custody.” The “derisory” investigations into deaths in custody have continued: Behrendt notes that “Other than the unsuccessful prosecution of Chris Hurley, not a single charge has been laid, not a single person held to account” for any of the deaths in custody.

Furthermore, since the Royal Commission into Aboriginal Deaths in Custody, there has been a steady increase in the number of Aboriginal people taken into custody. The latest Productivity Commission report found that, “From 2000 to 2013, the imprisonment rate for Aboriginal and Torres Strait Islander adults increased 57 per cent, while the non-Indigenous rate remained fairly constant, resulting in a widening of the gap.”

The statistics should speak for themselves of the extent to which Australia’s criminal justice system systematically discriminates against Aboriginal people. Sometimes, just telling one story at a time conveys the kinds of injustices that occur at an individual level. McQuire briefly recounts the events surrounding the deaths in custody of Mulrunji Doomadgee, and John Pat. Behrendt also cites the cases of Mr Ward, Ms Dhu and TJ Hickey. However, the fact is, there are so many injustices one could cite. There are so many outrages that could trigger riots, if Australians were not so resigned to the regular injustices we inflict on Aboriginal people.

One example is the case of Kwementyaye Briscoe. Mr Briscoe did not commit any offence. He was just out drinking with some friends, who made the mistake of being Aboriginal. Drinking is not an offence in the Northern Territory, but is routinely used as a pretext to arrest and detain Aboriginal people. As the inquest into Briscoe’s death in custody observed, “The numbers of Indigenous Australians taken into protective custody in the NT each month is a national shame”.

Greg Cavanagh, the coroner, noted that Alice Springs Watch House was very busy, mostly because of incidents relating to alcohol. From 1 July 2011 to 31 March 2012, there were 8,588 alcohol related incidents in Alice Springs involving police intervention.

Cavanagh “heard from officers that the main role for police performing general duties is to detain inebriated Aboriginal people in protective custody and to respond to domestic violence, usually fuelled by alcohol.” And the Assistant Commissioner agreed that “the vast majority of police work involves dealing with persons seriously affected by alcohol through excessive and very extensive liquor consumption. For the most part those seriously affected are Indigenous”.

Briscoe was in good health when he was drinking with his friends. A police officer, Constable First Class Gareth Evans, saw the group, and immediately gave chase and called for back-up. Even though not a word had been exchanged between Evans and the Aboriginal group, he later claimed that he decided protective custody was needed, as Briscoe seemed aggressive.

Briscoe was detained at 9:15 pm. He died approximately two and a half hours later – in protective custody. His protective custodians discovered his body about two hours after he died. The men who were paid to watch over the prisoners – and who were ordered to regularly check on Briscoe – instead distracted themselves with “various things, including an iPhone, an iPod, and the internet.”

The prisoners had earlier complained when Briscoe was dumped in a cell that his head “pissing out blood”. They urged the police to take him to the hospital. They were ignored. Cavanagh noted that a prisoner said “we told them to give him some medical attention and they didn’t seem like they cared”.

The police did not even bother to respond to the “distress calls made by prisoners in Cell 16, who could see and hear that Kwementyaye was in trouble” – indeed, “likely” the “last moments he was alive and at the last opportunity police had to save his life.” At the time, 11:44pm Officer David O’Keefe was listening to banter between his colleagues. 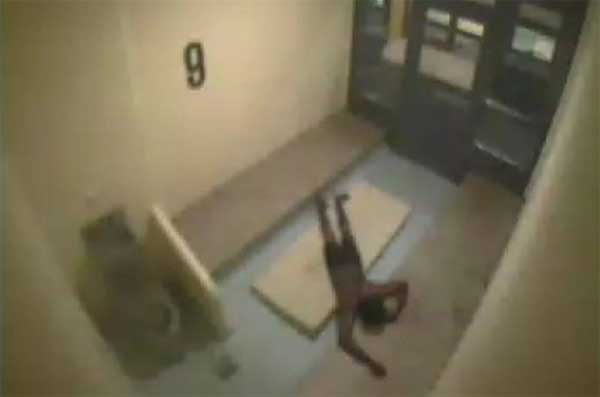 As yet another Aboriginal man died in jail – in this case, because he was forcibly taken into “protective” custody – once again, no one was held accountable. Media showed little interest, and politicians did not line up to mourn his tragic and avoidable death. Perhaps greater compassion would have been shown if he had decided to devote his life to mastering cricket.

In considering Australia’s criminal injustice system, it is also worth considering some cases in which Aboriginal people survive. In 2011, I wrote about the case of Marlon Noble. Marlon was born in 1982, and as a baby, contracted meningitis, winding up with cognitive difficulties. When he was 19, he was accused of sexually assaulting two young girls.

Those were serious allegations. In normal circumstances, in a civilised country, those allegations would be tested in a court of law. In Marlon’s case, the court decided that he was unfit to stand trial. So he was just imprisoned anyway. For over 10 years.

In June 2010 – about eight years into Marlon’s imprisonment – a forensic psychologist said that Marlon was fit to plead and stand trial. He wanted to plead not guilty. However, the charges were already withdrawn by the Director of Public Prosecutions: he had been imprisoned longer than the charges would have allowed for anyway.

Because the charges had been withdrawn, Marlon couldn’t be tried for them. And so the imprisonment of Marlon continued. When the Mentally Accused Advisory Board finally recommended releasing him, they did so with a range of stringent conditions. Conditions so harsh that Greens MLC Alison Xamon observed that he wouldn’t be allowed to “visit his murdered mother’s grave”. In effect, she complained, he wouldn’t be able to “lead a normal life”.

All because he was accused of crimes that seem to have never occurred – and because he was never even allowed to stand trial to challenge those allegations.

When I wrote my review of Marlon Noble’s case in December 2011, I wondered, “How many more Marlon Nobles are there out there, who we simply don't know about?”

The Aboriginal Disability Justice Campaign has been doing important work fighting to end the imprisonment of Aboriginal people with mental disabilities who have been imprisoned without trial.

In September 2012, they released a report, No End in Sight, where they discussed this issue. The report was written by Mindy Sotiri, with Patrick McGee and Eileen Baldry. They found that “indefinite detention is possible in; Western Australia, the Northern Territory, Queensland, South Australia, the Australian Capital Territory, South Australia and Tasmania.” They estimated that there were over 100 such detainees in Queensland, but couldn’t find out how many were Indigenous.

The only jurisdictions for which they could get figures were the NT and WA: “In Western Australia, of the 33 people held under the Mentally Impaired Accused Act, 11 of them are Indigenous. In the Northern Territory, there are nine people on supervision orders, all of whom are Indigenous.”

That’s right: in the Northern Territory, one hundred percent of the people being detained without trial were Aboriginal.

Imprisoning people for years without trial should be a scandal. The fact that we do it to Aboriginal people with mental disabilities just shows how our system preys on the most vulnerable.

It is also interesting to contrast the case of Marlon Noble with the Dreyfus Affair. Alfred Dreyfus was falsely charged with treason, and imprisoned from 1894 to 1899, though the Affair dragged on for years to come. It effectively divided the country, as shown in a famous cartoon. In the case of Dreyfus, a Jewish man was falsely imprisoned for five years, with a current of racial animus playing a role in his imprisonment and among those who supported his imprisonment. This was a cause celebre in France, causing tremendous outrage. Those who defended the imprisonment at least cared.

In the US, there are cases like Rodney King, or Michael Brown, or Trayvon Martin, which outrage people across the nation. In France, over 100 years ago, there was the Dreyfus Affair.

In Australia, we lock up Aboriginal people for years without trial. In the case of Marlon Noble, for over 10 years. It didn’t divide the nation: even now, most Australians have probably never heard of the case. Or others, like Roseanne Fulton.

As nations go, we remain a backwater, unable to shake our complacency.