University student Freya Newman will face the Downing Centre Local Court tomorrow for what is expected to be the final time, after pleading guilty to accessing the student records of the prime minister’s daughter Frances Abbott earlier in the year.

In September Newman pleaded guilty to breaching Section 308(H) of the NSW Crimes Act, after using the log in details of a fellow staff member at the Whitehouse Institute of Design to retrieve Ms Abbott’s records.

The records revealed the prime minister’s daughter had paid just over $7,000 for her $68,000 degree, and received the award after just one meeting with Whitehouse Institute owner Leanne Whitehouse.

The Institute and the Prime Minister’s Office have continued to argue the secret scholarship was granted on the basis of merit, but have been contradicted by a former teacher of Ms Abbott, the school’s own website (which still reports that no scholarships are available), as well as other students at the Institute.

One fellow student described the scholarship as “beyond a joke” while one of Ms Abbott’s former teachers, Mellitios Kyriakidis said: “Even from her year I could name 10 people more deserving either for merit or financial need or both [of a scholarship].”

After helping to make the scholarship publicly known, Newman was pursued legally.

At an October hearing Newman’s lawyer, Tony Payne SC, argued that Newman had not realised her actions were illegal, and that despite decades of experience in criminal law, even he had not realised using the log in details of another staff member to access records was a criminal offence.

He submitted that Newman had been encouraged to access the records by other staff members, but that she was also motivated by a sense of injustice.

He also noted that Newman had pleaded guilty at the earliest possible date and expressed contrition, including writing a letter of apology to Ms Abbott. 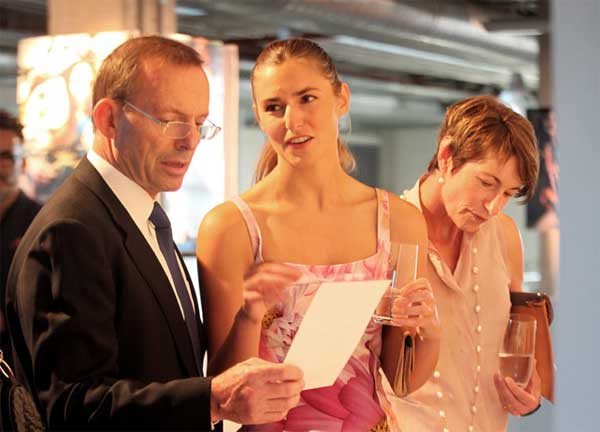 Police are pushing for Newman to have a conviction recorded for the offence, but have agreed it was on the lower end of offending, effectively ruling out the possibility of a two-year jail sentence, the maximum available for a breach of 308(H).

However, police prosecutor Amin Assaad told the Court in October that although Newman had not gained “financially or personally” from her actions, recording a conviction was necessary in order to deter other potential offenders.

Frances Abbott recently spoke publicly for the first time about the incident, forgiving Newman for accessing her records but comparing the 21-year-old to a “small child”.

After completing her studies Ms Abbott was given a job by the Whitehouse Institute, though a staff register revealed she was the only employee without a formal job description.

Her father, Prime Minister Tony Abbott, has still refused to update his parliamentary interests register, despite acknowledging Frances was his dependent at the time, and despite reporting numerous small benefits received by his children, including flight upgrades and tickets to free events.

Whitehouse Institute stands to benefit substantially from proposed Abbott Government reforms to higher education, with more than $800 million in public funding being released to private colleges for the first time.

* New Matilda is an independent Australian media publication. We rely predominantly on subscriptions for our survival. You can help fund us here. Or just help us by sharing this story on social media.