Yesterday was a momentous day for Australian politics.

Just how momentous has not yet been realised, and probably won’t become clear for many years. But there can be no doubt of the significance of the US-China emissions reduction deal.

The decision by the world’s two largest economies to set sweeping new emissions reductions targets is a symbolic step of historic proportions.

That symbolism is, of course, acutely embarrassing for Australia’s Prime Minister Tony Abbott, who did everything in his power to keep climate change and the environment off the agenda for this week’s G20 summit in Brisbane.

Now, as Michelle Grattan accurately observes, Abbott has been ambushed on the eve of the meeting. No amount of uneasy rhetoric can cover up the government's discomfort. This is a pact between the US and China, the two elephants in the room that even Abbott cannot ignore.

As President Obama said yesterday, “as the world’s two largest economies, energy consumers and emitters of greenhouse gases, we have a special responsibility to lead the global effort against climate change.”

Leaving aside the symbolism, the targets agreed to are important too. The US emissions reduction target, of a cut of 26-28 per cent below 2005 levels by 2025, is a huge advance on that committed to by Australia.

To achieve parity with the US target by 2025, Australia would need to cut our emissions by something like 28-31 per cent.

A reduction of that scale is essentially impossible under current policies. With the carbon price abolished and the RET threatened, most experts think we won’t even make our current target of a 5 per cent cut by 2020. Australia’s emissions are now rising again in the wake of the carbon tax’s abolition, and the Abbott government’s Direct Action policy is nothing but an expensive joke.

That’s not to say the US-China deal is perfect. Critics have rushed to decry it, claiming that it is an empty promise. And there are indeed many challenges to effective climate action.

The number one barrier remains the US Republican Party. The United States has just elected a cohort of climate denialist Republicans to Congress that make the IPA look like a bunch of hippies. Republicans dominate the House of Representatives and the Senate. Noted denialist James Inhofe is likely to chair a powerful Senate committee on the environment. Even with a Democrat in the White House, there seems little hope of US legislation to force national emissions reductions in America.

But Congress is not the only player in US politics. State-level carbon policies such as California’s emissions trading scheme are accelerating, and Obama has shown he is prepared to use his executive powers to regulate fossil fuel emissions under the Clean Air Act. Whatever the politics, US emissions are themselves falling.

What about China? The implications for Australia of Chinese willingness to address fossil fuel emissions are, if anything, even more significant.

There can now be no doubt that China means to move towards decarbonisation. Indeed, some of the criticism of the deal has amounted to the argument that, because the Chinese are already winding back their fossil fuel consumption and moving towards renewables, the announcement by President Xi Jinping is no more than business as usual. 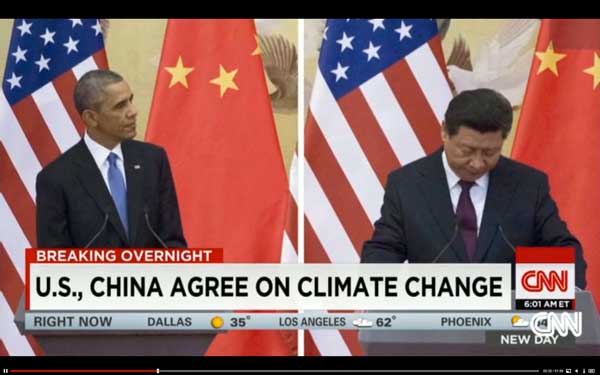 But business as usual already implies a big shift away from fossil fuels. In recent years China has introduced an emissions trading scheme in several of its largest provinces, slapped a tariff on coal imports, closed many polluting factories and power plants, and ploughed billions into green technologies. With massive Chinese investment in renewables already underway, this announcement shows China plans to dominate global cleantech industries, rather than follow. Chinese demand for coal could halve by 2020.

The economic implications for Australia are profound. After the runaway mining boom of the last decade, Australia’s economy is now heavily dependent on resource wealth. With our services industries underperforming, Australia is staring to resemble a third world economy, locked into rust-belt industries.

The huge potential impact of Chinese decarbonisation on Australian commodity exports shows once and for all the short-sighted folly of the Abbott government’s attempts to leave climate off the G20 agenda. Climate will be the defining trend of the global economy in coming decades. When Abbott and Hockey argue that the environment is somehow not an economic issue, they are recklessly jeopardising the future of Australian living standards.

Domestically, the deal signals the beginning of the end of conservative Australia’s anti-climate charade. Put simply, the jig is up.

Australian politicians and voters can no longer stop the gathering momentum for global decarbonisation. All we can do is further delay the inevitable, making the eventual adjustment more painful.

While the self-deluded will continue to tell each other comforting lies, the rest of the world no longer cares. Conservatives can continue to pretend that climate change isn’t happening, or that the world is not doing something about it. But that won’t change the facts of the matter.

The tide is going out on climate denialism, and the swimmers at the beach have forgotten their speedos.

Carbon politics in Australia has a long and ignoble backstory, which is all the more tragic for how unnecessary it has been. In the United Kingdom, for instance, the Conservative Party has had relatively little difficulty squaring its political philosophies with the pricing of pollution. Carbon has not been turned into an anti-left crusade in Britain. As a consequence, in the run up to next year’s election, climate is one of the few political issues that the Cameron government doesn’t have to worry about.

In Australia, under the doleful influence of mining billionaires and the right-wing think tanks they fund, climate has been turned into a conservative litmus test: a banner issue in which right-wingers test each other for ideological purity.

The result is the most viscerally anti-environment federal government in 40 years.

The hard truth is that the world will act on climate. It may not be enough action, and it may be too late to save the biosphere as we know it, but there will be action. Indeed, the impending ecological catastrophe will only make future economic adjustment more wrenching.

If Australia believes we can go it alone as a high-polluting, high carbon economy at the bottom of the world, our trading partners will soon rudely awaken us.

Quite simply, Australia’s mining wealth is becoming irrelevant. Advancing technology and policy change will see fossil fuel assets stranded on a currently unimaginable scale. Only a government utterly beholden to the interests of the resources sector can turn away from the writing on the wall.

Tony Abbott shouldn’t have too much trouble recognising this, because he never really cared about climate change in the first place. Unlike the die-hard denialists on his back bench, Abbott has only ever seen climate as a vehicle for personal ambition.

The Abbott government now has two choices. It can continue the charade, pretending that its risible Direct Action subsides can somehow buy emissions reductions, all the while pandering to the hard right and the mining billionaires.

Or it can recognise the painful reality, which is that while carbon was a handy tactic to demolish a Labor government, Australia can no longer afford a government signed up to the denialist crusade.