Those, like me, watching the Whitlam Memorial retrospectively on iView were likely not privy to all the times Tony Abbott chose not applaud a speaker. But during Blanchett’s speech the camera cut away to Abbott on several occasions; in these shots he was not clapping while the majority of the audience filled Town Hall with thunderous applause.

Alex McKinnon at Junkee.com was quick to point to the lack of applause as an indicator that he was feeling “super uncomfortable.” According to McKinnon, Blanchett’s itemisation of the social policies (equal pay) and institutions (the Australia Council and Medibank) that enabled her to become our most famous cultural export made Abbott feel really bad.

In this scenario the man systematically dismantling the Whitlam legacy is not clapping because he was engaged in quiet self-reflection and possibly feeling something like shame.

Unfortunately, the memorial service did not reveal Tony Abbott MHR as a man capable of such a necessary and sociable emotion. Although throughout the day there were many attempts at mobilising such feelings from the PM.

First there was the booing. The PM was heckled as he entered the Town Hall. But the only person this seems to have affected is Amanda Vanstone, and she took the opportunity to give us all a lesson on how to behave at a memorial service.

According to Vanstone, the rabble outside a venue are not allowed to boo dignitaries as they enter the hall because it is “impolite”, lacks “appropriate decorum” and is an “inappropriate display of self-indulgent rudeness”.

Although it reads like a page from a nineteenth century book of etiquette, the reason these question-time style antics are off limits, she argued, are because tax-payer funded state memorial services are above politics. The event for a dead politician, attended by politicians is, by this logic, an opportunity for an uncomplicated display of bipartisan respect. 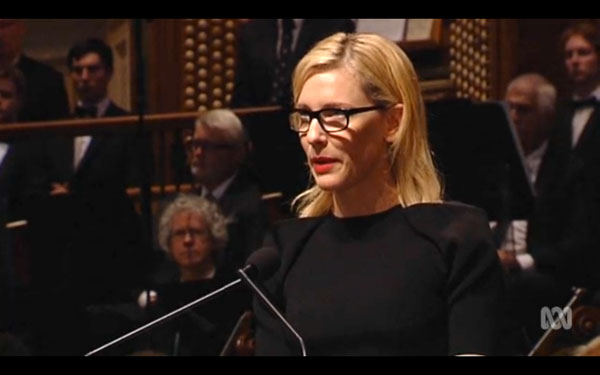 But Whitlam’s memorial was an opportunity to celebrate a time of brave partisan politics. The heckling was an attempt to get in Abbott’s ear and indicate that the policies of his Government do not accord at all with those of the man whose life is about to be celebrated. The collective boo and hiss was perhaps designed to spook Abbott with the ghost of Labor party past.

Then there were the speeches in which the inchoate sounds of the booing became eloquent performances. Indeed, when viewed as speeches within the current political context, rather than just reflections on the life and legacy of a single individual, they seem less about Gough and more about Tony.

This dead man, all the speakers said, transformed Australia for the better, unlike you, Mr Abbott. Look closely at his legacy, they all said, don’t you want to be remembered for building hope rather than cultivating fear? For encouraging compassion rather than inviting cruelty? For social reform rather than economic management?

So many questions were hurled at the PM and the Government in the guise of memorials to Gough. Abbott looked a bit weird and Brandis looked bored.

Then there was the online response to the memorial. Individual speeches were watched on iView and Youtube and shared via Facebook and Twitter. McKinnon’s piece for Junkee was shared over 140,000 times.

In the only time I’ve ever agreed with Michael Pascoe, the widespread grief for the death of Whitlam expressed by a flurry of online activities is more about the loss of his social legacy than the loss of the man himself. Through his memorial, we were able to pay our respects to an idea of Australia that is in the process of being demolished.

Perhaps people shared the videos because if enough people saw the attempts to publically shame Abbott, Abbott himself would finally feel shame. But he’s already in China geared up for more awkward encounters with foreign dignitaries.

So, as with any good piece of tragic theatre, the widespread catharsis facilitated by the booing, the speeches and the online sharing of the service belies the real politics of the memorial.

Withholding applause is really just polite society’s equivalent of booing. It is a vote against the contents of the memorial speeches, not “super discomfort”.

To withhold applause is to refuse to submit to the terms of a social contract. And politicans who care naught for social policy are unlikely to give a damn about social contracts. There is no such thing as society, didn’t you know? Abbott’s refusal to applaud Blanchett was not a transformative experience of shame, but rather an arrogant display of his political position and power. Flanked by like-minded non-clappers, his lack of applause signaled that, as a politician, he is staunchly against the Australia Council, Medicare, equal pay and no doubt the extra ordinary list of other social policies that Noel Pearson listed later in the service too.

The real tragedy of the event is not the death of Gough, but that those “politely booing” all that he represented actually have the power today. Abbott and his men actually sat there and refused to applaud because they do not want to celebrate his legacy. They are in the middle of creating their own legacy by undoing his. Not clapping at the Whitlam memorial was them dancing on his grave.

Despite the public outpouring of grief for the loss of a more just Australia, nothing has changed. What the response also reveals, however, is that there is widespread anger and rage at what is happening to the country and palpable desire for things to be wildly different.

This is why we cannot be fooled by the catharsis facilitated by the memorial's theatrics. The momentary feeling of relief at the realization that there are lots of people out there who want a more just society is not enough.

We urgently need to put real political pressure on the Government and the Opposition. How to do this?

We need to lack decorum and politeness. We have to be rude and exploit Whitlam’s death. Let’s transform his legacy into a political battering ram to create a widespread movement for change.

Short of revolution, this is the only way to ensure the survival of social democracy in Australia.