On Thursday October 2nd, a wind swept, blistered, former Israeli soldier arrives at the Federal Parliament to deliver a petition in support of the Boycott Sanctions Boycott (BDS) campaign for Palestinians’ rights to self determination.

For 10 days, over 300 gruelling kilometres from Sydney to Canberra, 52-year-old Marcelo Svirsky, now a University of Wollongong academic, has walked to draw the attention of Australian parliamentarians to the critical predicament of the Palestinian people in the West Bank, East Jerusalem and Gaza.

His petition asks the Australian Government to honour their obligations under international law through boycott, divestment and sanctions of states, institutions and companies which facilitate Israel’s illegal, discriminatory and cruel policies towards Palestinians.

Marcelo explains, “I am using my love of walking for one of the world’s most socially just causes. Only international pressure by civil society, based on non-violent means of Boycott can change the balance of power and eventually bring Israel to compromise.

“Along my route I’ve had an opportunity to educate about the BDS movement. At the University of Wollongong a large student meeting unanimously resolved that all students, staff and relevant trade unions be asked to support the BDS movement.

“Thousands of motorists have seen my banner, conversations with passers by have given me the chance to explain my purpose, and along the way I’ve collected many more signatures.” 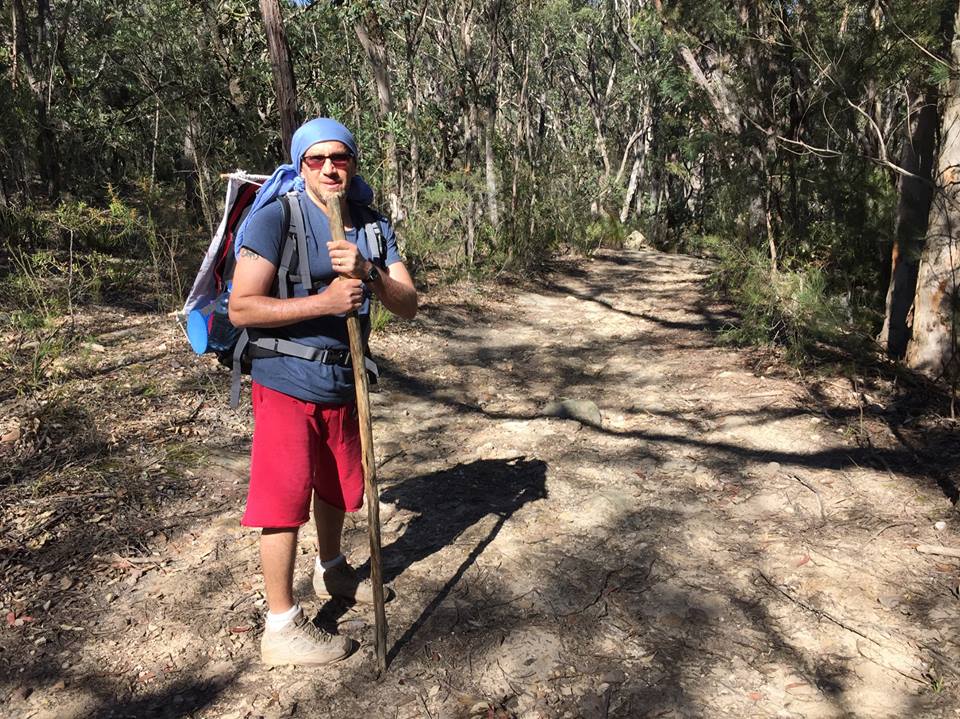 Why is Marcelo outraged by injustice?

Born in Israel into a working class family, he says that childhood experiences of inequality shaped his anxieties about social justice. In addition, “As a Sergeant in the Israeli Combat Engineering Corps I had seen so many abuses of Palestinians’ basic human rights that I decided I should not continue support for the military and I signed a ‘Courage to Refuse’ letter.”

Marcelo respects the rights of people from diverse cultures. In preparation for his walk he obtained permission from the Land Councils of La Perouse, Tharawal, Illawarra, Pejar and Ngambri to walk on their land.

Evidence of this attitude flows through the pages of his several books in which he writes of the need for cultural transformation in Israel – to abolish the separate policies, laws and spaces which govern the lives of Jewish citizens of Israel, Arab Israelis, Palestinians on the West Bank and the imprisoned people of Gaza.

That transformation requires an end to Israel’s use of military and technological hardware to control the lives of Palestinians through dispossession, hundreds of checkpoints, arbitrary arrests, imprisonment without trial and murder.

The 2005 BDS founding document aimed to bring Israel to comply with the precepts of international law by ending the occupation and colonization of all Palestinian lands, by dismantling the Wall and by recognizing the rights of Arab-Palestinian citizens of Israel to full equality.

That document also refers to promotion of the rights of Palestinian refugees to return to their homes and properties as stipulated in UN resolution 194.

Marcelo is prepared for the derision which usually follows public statements by supporters of the BDS movement: that they are racist, anti-Semitic and intent on the destruction of Israel. With his characteristic arrogance, Michael Danby MP has already criticised Marcelo’s courageous stand.

Yet even a modest investigation of this world-wide movement shows the convenient stereotype character of the Danby-like derision. The architects and supporters of the BDS movement oppose anti-Semitism and racism of any kind.

Ben Saul, professor of international all law at Sydney University says of UN General Assembly Resolutions on Palestine adopted last year, that they were "not anti-Israel but pro-international law, which Israel persistently chooses to violate." He goes on to say, "Australia's biased friendship towards Israel has served neither Australian nor Israeli interests."

Richard Falk, Professor International Law at Princeton and a former UN Rapporteur for the Occupied Territories says that the BDS movement provides a hopeful way of writing the future history of Palestine in the legal and moral language of rights, rather than the bloody deeds of warfare.

The influential US organization, Jewish Voice for Peace, says that BDS is a viable democratic and non-violent response to the horrific policies used by the State of Israel against Palestinians.

In common with Australian supporters of BDS, including a significant number of Sydney University staff, Marcello takes very seriously his responsibility to educate others about justice.

“I’m an Israeli Jew who rejects Israel’s continuing subjugation of the Palestinians. I am fully committed to the principles of the BDS movement and I encourage others to join this non-violent action.”

Amid the current political preoccupation with war and with the threat of terrorist attacks, the sight of one individual trekking for 10 days on behalf of another people’s human rights signifies the value of non-violent protest and shows what humanity can mean.

Footsore Marcelo Svirsky is glad to have finished his walk. He hopes that Australian politicians and representatives of the media will find time to read the petition, reflect on the principles inherent in the BDS movement and summon sufficient courage to support it.

Professor Stuart Rees is the founder of the Sydney Peace Foundation.