Health experts have warned that more deaths in offshore detention centres are likely and called for the government to reinstate an independent immigration health advisory group, as asylum seeker Hamid Kehazaei remains on life-support in a Brisbane hospital after being declared brain dead.

Dr Richard Kidd, a Queensland representative for the Australian Medical Association and co-founder of Doctors for Refugees, told New Matilda the conditions on Manus Island were “woeful”, and that the Kehazaei incident needed an independent investigation.

“I really do expect that we’re going to see other very serious bad health outcomes and probably more deaths, and I think this is a terribly shameful thing for Australia,” Dr Kidd said.

“This is why the AMA for quite a long time now has been strongly advocating for an independent medical authority to oversee the provision of healthcare services to asylum seekers and refugees.”

Sanitation and health problems in the Manus complex have long been flagged by asylum seekers detained on the island.

Victoria Martin, who has been in regular contact with a group of asylum seekers held on Manus over the past two years, said the centre’s insufficient facilities forced detainees to walk through sewerage, often barefoot.

“There are nowhere near enough ablution blocks or toilets, and in fact we get repeated complaints about the water supply not working at all,” she said.

“Because of inadequate plumbing, inadequate sewerage, inadequate toileting facilities, you also get large numbers of people that are using the same facilities and particularly when it rains the toilets are prone to backing-up and raw sewerage regularly contaminates the areas that people are not just walking in, but also sleeping in.”

Martin said asylum seekers had reiterated these concerns in recent days and were extremely distressed after hearing that Mr Kehazaei had been declared brain dead.

While the exact details of events remain unclear, it appears the 24-year-old Iranian suffered cardiac arrest as a result of sepsis, a condition that develops after an infection spreads into the blood and through the body.

Health provider IHMS has so far declined to comment on the events leading to Mr Kehazaei’s transfer to a PNG hospital and then Brisbane, but the timing of his initial request for medical help and subsequent treatment and transfer will be key factors in determining whether the incident could have been avoided.

Griffith University Professor Leanne Aitkin, a sepsis expert, said treatment for the condition is greatly enhanced by a rapid response, within one to six hours, and by attending appropriately to the initial infection before it is able to spread.

While unable to comment specifically on Kehazaei’s case, Aitkin said the rate of survival in Australia would normally be around 80 per cent, a far higher figure than in underdeveloped nations.

In December 2013, the Coalition abolished the advisory group initially formed by the Howard government to provide independent health assessments to the minister.

Kidd linked the decision to the circumstances leading to Mr Kehazaei’s condition.

“I think there should be an independent assessment of what’s gone wrong,” he said.

The government has confirmed that the Department of Immigration’s chief medical officer will conduct a review.

Earlier today, around 60 people attended a vigil outside the Mater Hospital in Brisbane. One woman played a kamancheh – a mournful Iranian string instrument – while others held placards expressing outrage at Immigration Minister Scott Morrison. Flowers were laid at the hospital’s gate, and candles lit. 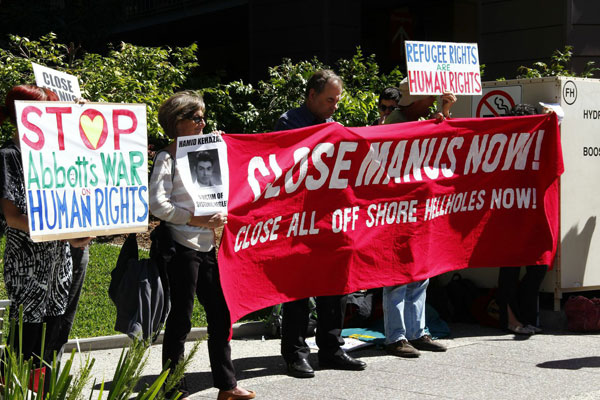 Fay Waddington, a 64-year-old local, said she decided to attend the sombre vigil to express her outrage that a second man held on Manus Island was now close to death.

“It’s appalling and I can’t have it done in my name. I feel I have to come out and say I’m on Team un-Australia if this is what Team Australia does,” she said, referring to Prime Minister Tony Abbott’s calls for national unity.

Waddington said when she first saw the images of Kehazaei she broke down in tears.

Far larger events are now planned across the country, with GetUp organising a series of vigils to take place in major cities tonight, and encouraging small communities to organise their own.

As anger in the community grows, Mr Kehazaei’s family has been conferring with Australian-based friends, discussing what will happen to their son and whether his life-support will be switched off.

In February, thousands attended vigils marking the death of Reza Barati, as a show of opposition to the government’s tough anti-refugee policies.