A NSW MP has spoken out about her own experience of police intimidation at a Sydney vigil held to commemorate the death of African-American man Michael Brown, who was shot dead by police in the US town of Ferguson, Missouri last month.

Mehreen Faruqi, a Greens member of the NSW Legislative Council, told a crowd of around 90 gathered in Sydney’s Martin Place that the killing of Brown was not an isolated episode, but the symptom of a society that privileged some members over others.

Joining several Aboriginal speakers, Faruqi said that women of colour such as herself were raised to be cautious of police.

“I had a little taste of police intimidation when visiting brave activists standing up against environmental destruction at the Leard State Forest earlier this year,” Faruqi said.

“I was issued with a 'move on' order and verbally intimidated by police for simply stopping to inquire about the welfare of someone police had detained.”

At the Monday night vigil, activists and students held candles as a sign of solidarity for the people of Ferguson, Missouri, where protests have continued in the wake of the shooting of two African-American men, including the unarmed Michael Brown.

While a small number of police were in attendance, the event remained peaceful.

The killing of Brown has brought racial tensions in the United States under international scrutiny, with questions raised about the militarisation of the nation’s police forces, and continuing exclusion of Black Americans from representative and law-making bodies.

As Sydney’s suits flowed by, heading home for the evening as dusk fell on the CBD, speakers in Martin Place warned that miscarriages of justice and over-policing of Aboriginal people were continuing in Australia.

President of the Indigenous Social Justice Association Ray Jackson said he followed the events in Ferguson with horror, and drew parallels to infamous police killings in Australia, including the death of Palm Island man Mulrunji Doomadgee and Brazilian student Roberto Laudisio Curti, who died after police tasered him 14 times.

Xiaoran Shi, one of the organisers of the vigil, said the event aimed to draw community attention towards similar injustices in Australia. 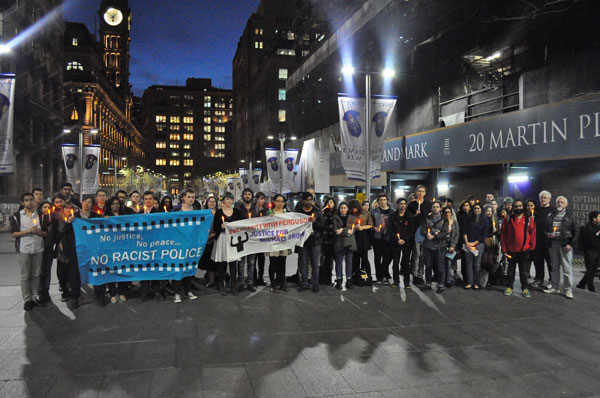 “Racism has influenced the governing principles and policies of Australia since colonisation, and for a country that abolished capital punishment in 1984, we have an alarmingly high incidence of Indigenous deaths in custody,” Shi said.

“Just last month, 22 year-old Indigenous woman Julieka Dhu died in a WA jail, where she was held for four days for not paying her parking fines.

“In 2012, Maureen Mandijarra died in her cell in Broome after being arrested for drinking in public, an offence which carries a maximum penalty of a $2,000 fine in WA.

“In 2008, a respected Aboriginal elder identified in the media as “Mr Ward” died in the back of a paddy wagon after being picked up and driven 400km across the WA desert.

“The deaths of Michael Brown, Julieka Dhu, Mauren Mandijarra and Mr Ward were all gruesome, unnecessary, and entirely preventable had the police exercised their duty of care.”