Climate sceptic Dick Warburton has tied himself in an ideological knot over the findings of his Renewable Energy Target (RET) review. Unfortunately for him it had the same findings as just about every other study into the RET. That is that it’s going to lower electricity prices, boost employment and funnel billions of dollars of investment into an emerging industry.

In its increasingly desperate attempts to justify doing away with the RET following these findings, the Warburton Review has been forced to ignore the Abbott Government’s terms of reference, which called for a focus on lower electricity prices.

The RET’s action of keeping electricity costs down was not the finding the government was hoping for when they began this process. The Warburton Review has had to recommend options that will cause increases in household’s electricity prices, relying on vague references to ‘cheaper alternatives’ to reduce the carbon emissions which its lead proponent doesn’t believe, against all credible scientific evidence, are causing any harm.

But the government could not have been more clear when it announced this additional RET review that it wanted to focus on household cost of living (a bi-annual review process is legislated and would have happened anyway, just without the ideological focus). At the announcement of the review, Environment Minister Greg Hunt said: “ We are a government that is unashamedly doing our best to take pressure off manufacturing and households through anything that can lower electricity prices.”

The review terms of reference say the review should consider “the economic, environmental and social impacts of the RET scheme, in particular the impacts on electricity prices, energy markets, the renewable energy sector, the manufacturing sector and Australian households”.

The review modelled five options, all of which reduced the amount of renewable energy the target would otherwise produce by 2020. From these five options, the review recommended two.

The first was ‘grandfathering’ the RET, or closing the scheme to all new entrants. The second was limiting growth in the target to 50% of new growth in the demand for electricity. Since electricity demand has actually been falling for four years, this is also likely to restrict growth of the RET.

The review’s own report then goes on to show that these options are the most costly to households. The table below is taken from the report and shows the cost to households over the next 10 years of each of the options, plus leaving the RET unchanged – which they have called ‘reference’. 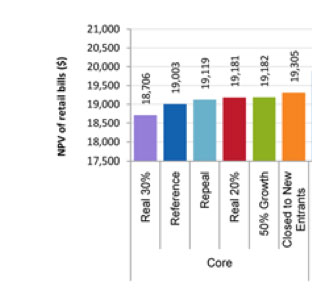 It has been an article of faith to many in the Coalition that renewable energy is expensive and unreliable. The Prime Minster even said as much at the time the RET review was announced.

Abbott said “the renewable energy target is causing pretty significant price pressure in the system”. Unfortunately for him the review shows he is dead wrong. It says the impact on retail electricity prices “appears to be small”.

With those pesky facts getting in the way, the focus has quickly shifted away from household’s electricity bills to the RET’s impact on the electricity market.

Mr Warburton has been out saying that the RET is a subsidy of $22 billion. You might think that means the taxpayer is footing a $22 billion bill, but unlike subsidies to the fossil fuel industry, it doesn’t actually cost the taxpayer a thing.

You might think, following on from Warburton’s words, that it is households that are paying the ‘subsidy’. In fact they will end up paying less.

And they’re the big winners if the government adopts the recommendation from the Warburton Review.

In fact, according to the review, they will receive a windfall gain of more than $9 billion.

So should we be concerned about fossil fuel generators?

Pricing fossil fuel generators out of the market is not a mistake, it is a design feature of the RET.

The RET was designed to transition Australia’s energy production from fossil fuels to renewable energy. Transition doesn’t just mean producing more renewable electricity; it also means producing less fossil fuel electricity. And that is precisely what the RET is doing.

We now see coal-fired power stations sitting idle. While that might be an expense to those that have invested in coal fired generation, it’s a plus for the community which will see the positive environmental and health effects from a move to clean energy generation.

The RET is creating jobs, creating investment, reducing emissions and reducing electricity prices. Its good news for everyone except the fossil fuel generators.

But then aren’t they the ones we’re trying to transition away from?