Email spam can be many things. A distraction from work, a petty annoyance, a questionable offer of riches from a ‘deposed Nigerian prince’.

What it’s not often associated with, however, is grassroots politics.

Yet that’s exactly what ‘Bowz’ Chapman hopes it can be used for.

The 27-year-old is the man behind a new App enabling unemployed Australians to spam MPs with job applications, to protest the Coalition’s plan to force people receiving Newstart payments to apply for 40 jobs a month.

On the day it was launched, the DoleBludger App helped users send approximately 20 emails to various Federal MPs. In a worrying sign for those charged with staffing the inboxes of our Parliamentarians, a further 4,920 were sent over the next two days.

The idea for the App was born after Chapman shared a beer with a neighbour on Budget night and discussed the growing severity of Australia’s welfare system.

A resident of a tiny and isolated town in WA, Chapman told New Matilda he had seen too many keyboard warriors complaining online about the Coalition’s harsh budget, and wanted to actually do something about it.

Before launching DoleBludger, Chapman made a quick calculation indicating the Coalition’s 40 applications per month policy would mean 400 million job applications would have to be sent every year by unemployed Australians.

“This App, it’s a protest in one sense, but it’s meant to poke fun at the policy,” Chapman says.

The App raises some interesting questions: how could it ever be hoped to fairly monitor whether people were making genuine job applications or not, and how does the Coalition plan make that determination? Is there a difference between spamming MPs with your CV and seriously emailing 40 local businesses you know can’t afford any more staff? 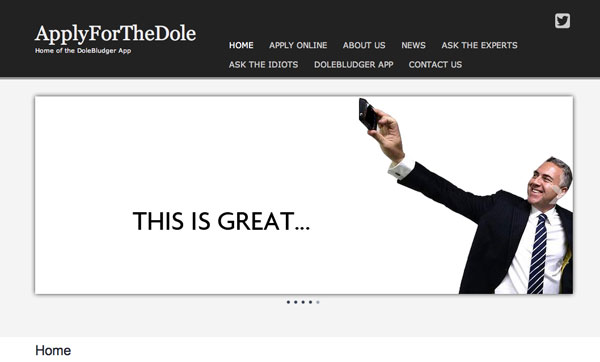 Chapman knows first hand just how impractical the requirement would be. Though currently working, he says the majority of those in the community where he lives have virtually no access to jobs, with just two major employers existing within 200kms. Unable to afford cars, the number of applications the unemployed in the community complete every month will do nothing to further their prospects.

But the inspiration to create the App was also personal. Chapman has relied on Newstart for two periods of his adult life and experienced exactly the kind of squeeze that has led welfare and business groups to complain the payment is so low it actually prevents the unemployed from re-entering the workforce.

“After rent I had about $60 a fortnight to live off which was for every living expense, aside from rent and internet,” Chapman says.

“I know what it’s like to have to choose between your bills and food or your clothes and going out.

“When you’re on Newstart there’s no fun in life. You don’t get to go out, you can’t socialise with your friends. You’re lucky if you can afford credit on your phone to stay in touch with people.

“The money you get on Newstart, the amount is so small, it’s disheartening in itself.

“I have a uni degree, but I was applying for jobs against 500 other people, probably two-thirds of whom were better qualified than me. There just weren’t that many jobs out there in my field.”

While not expecting them to open the potentially hundreds of thousands of emails and applications his App will direct their way, Chapman hopes his invention will provide a platform for average people to communicate with their representatives and register their dismay at the policy.

“I suppose it empowers people by giving them direct contact with government. I don’t know how many people my age have ever actually spoken to or met a politician,” he says.

Lampooned by welfare groups and business owners, Abetz’s 40-application quota may end up in spam box itself.

But the Coalition are still proposing a range of severe welfare reforms, which include a massive extension of work for the dole programs (which is extremely unlikely to help people find real jobs),  welfare quarantining, moving those with disabilities on to lower payments, and forcing under-30s to endure six months without any support if they lose their job.

Even if the application quota remains at 20, there are going to be plenty of good reasons to email MPs in the near future.

“We can have a decent society without needing to cut funding to those who need it most,” says Chapman.

The DoleBludger App can be downloaded here.