Both sides in the Scottish Yes/No referendum for independence from Great Britain have taken aim at Australian Prime Minister Tony Abbott, albeit one a little more gently than the other.

Yesterday, The Times reported an interview with Tony Abbott in which he described people who support the secession of Scotland from the United Kingdom as the ‘enemies of freedom and justice’.

That happens to be include the Scottish Government, which is leading the charge for secession, plus around half the Scottish population, based on the latest polls.

On September 18 – a year to the day since Abbott was elected to government in Australia – the Scots will again go to the vote to decide whether or not to go solo from the United Kingdom.

The Yes side was outraged by Abbott’s comments, who they described as “famously gaffe prone”. The most prominent government minister leading the Yes campaign, Alex Salmond, Scotland’s First Minister, lead the assault on Abbott overnight.

"Mr Abbott's comments are hypocritical because independence does not seem to have done Australia any harm,” Salmond told BBC. 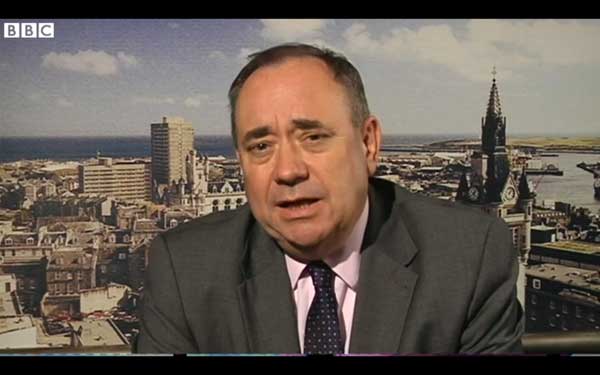 "They are foolish, actually, because of the way he said it. To say the people of Scotland who supported independence weren't friends of freedom or justice, I mean, the independence process is about freedom and justice."

Mr Salmond told the BBC that Abbott was "notoriously gaffe-prone" and he had "put his foot right in it" with his comments.

"If it does anything it will persuade people to vote Yes because the natural reaction to this sort of nonsense is 'Who is Mr Abbott to lecture Scots on freedom and justice?'"

And that’s a theory that seems to have been shared by the ‘No campaigners’ who wasted no time in distancing themselves from the Australian Prime Minister, mindful that Abbott singing the praises of the Empire might harden Scottish attitudes against London.

“Well, Australians are famously direct,” Jim Murphy, an MP from the Better Together Campaign told the BBC, apparently trying to “play down” the remarks.

“They say what they mean and they mean what they say – it’s a different political culture.”

Which is true of Australian politics to some degree, but famously not true of Abbott.

On the broader politics front, Mark Latham probably did mean what he said when he called the Liberals a ‘conga line of suck holes’.

But Tony Abbott probably didn’t mean what he said when he referred to the ‘suppository of all knowledge’; to having never met with George Pell when he had; to telling Kerry O’Brien that people shouldn’t believe what he says; to referring to the ‘housewives of Australia while they’re doing the ironing’; and to calling Canada ‘Canadia’.

For his part, Abbott this afternoon had decided to finally shut his mouth. Cornered by the press in the Blue Mountains for the final leg of his Pollie Pedal charity ride, Abbott was asked to expand on his Scottish ‘enemies of freedom’ comments.

Abbott simply smiled at the media, and walked off… in a purple riding jersey, perhaps for the first time, meaning what he said.