Within the first six months of 1900, over 44,000 rats were killed and heaped into piles throughout some of Sydney’s oldest suburbs.

In an attempt to rid the city of the bubonic plague, professional rat catchers either threw the rats’ muddied corpses into Sydney harbour or destroyed them in special rat-friendly incinerators.

Those very rats, covered in plague-spreading fleas, first made land on the wharves which still hug the suburb of Millers Point.

Many local homes were marked for cleansing, disinfecting, demolition and burning, as the plague went on to kill 103 people in eight months. Today, homes in Millers Point are still being marked out, but for a different type of cleansing.

The New South Wales state government will auction off 293 high-value public housing properties in Millers Point, Gloucester Street and the Sirius building in The Rocks over a two year period, forcing 590 residents to be relocated.

Many of these residents, and even some whose homes aren’t being sold, have tied yellow ribbons to their front doors in solidarity against the state government’s plan.

Aside from such a ribbon, the red-brick frontage of 14 High Street is decorated with three small Australian flags and the words “NO SALE OF PUBLIC HOUSING” stencilled onto a white banner.

The home, like many others in the suburb, has barely changed as high-rises have climbed into the cityscape around it. Number 14 belongs to Barney Gardner, a 65-year-old who has lived in Millers Point since his birth.

Barney has moved house only once, making the trip from 12 High Street to 14 High Street in 1990.

You never stray far from the tree.

Sandwiched between commercial tourist precinct The Rocks on its east and the forthcoming high-roller-haven Barangaroo to its west, Millers Point is comparatively quiet, placid and residential. It’s dotted with slick offices but lined with pastel and earth-coloured terraces. The homes here are heritage listed, “But the people are too,” Barney says. “So if they get rid of the people, who’s gonna tell the stories?” 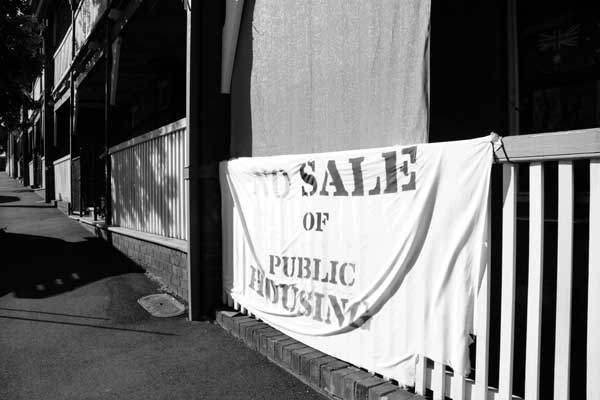 Approaching the Harry Jensen Activity Centre on Argyle Street, a large banner is visible across the centre’s fence-line – “OUR COMMUNITY NOT 4 SALE”. Inside, the space is weighted by a sterile linoleum floor, metal-framed chairs crowding small round tables, and a kitchen to the rear.

A whiteboard on the wall reads, “THURSDAY: Roast pork with gravy and apple, or french lamb casserole, and veggies.”

Barney twice offers coffee or tea or water or biscuits before we sit. He’s wearing a plaid flannel shirt, and speaks calmly. But just over a week before we spoke, he was standing outside Sydney Town Hall, yelling into a megaphone and comparing the state government’s plan to Nazism.

“We’re gonna stay in our places FOREVER,” he and over a dozen protesters shouted, their voices coldly subsumed by the wind.

In March, Pru Goward, then Minister for Family and Community Services, revealed that the state government will relocate the 590 evicted residents and reinvest the proceeds from the sale of their homes back into the social housing system, which has over 57,000 people on its waiting list.

The letter opened with, “I am writing to you today to inform you that government owned properties in Millers Point area [sic]will be sold, including the home you occupy.”

Three residents died and two others were hospitalised in the following weeks.

“It can’t be directly attributed to what’s going on, but we know [the letter]did affect them,” Barney says, shuffling the newspapers and documents which sit in piles on the table between us.

As the convener of the Millers Point, Dawes Point & The Rocks Public Housing Tenants Group, Barney speaks for many residents who cannot represent themselves.

According to Barney, Millers Point is “under attack” from a “blitzkrieg” whose main tactic is harassment via Specialist Relocations Officers, aka the government “goons”.

“We don’t wanna have a violent confrontation, but if they force that upon us that’s their doing, not ours," he says. “We’ll just be linking arms and chaining ourselves to gates and doorways.”

Specialist social agency Cred Community Planning were commissioned by the Department of Housing in 2012 to develop a Social Impact Assessment for Millers Point.

The assessment was only made publicly available on the day of Pru Goward’s sale announcement. Cred’s assessment declared that the public housing in Millers Point “is not generally considered suitable as social housing dwellings”, due to the expense of internal upgrades, high maintenance liabilities, and the fact that many buildings aren’t Building Code of Australia compliant.

In her sale announcement, Goward claimed that almost $7 million had been spent on property maintenance over the last two years alone.

Cred recommended that some of the funds from the sale of homes in and around Millers Point be used to build new social housing properties nearby, especially for elderly residents, adding that they may experience “ongoing negative impacts of stress and poor health outcomes”.

The state government dismissed this recommendation, and said that they want elderly residents to “build connections in their new communities”.

For many residents, the state government’s plan to sell their homes is not only an attack on the basis of their livelihoods but an attack on their emotional and historical links to the suburb.

For many, including Barney, it’s a losing battle.

“My mind wanders to despair because I see the elderly people here. The despair and the look in their eyes, the sound of their voice. But that helps me keep focused on what we’re trying to do,” he says. “Would the Americans allow a McDonalds to be built on Plymouth Rock?” Barney suddenly asks.

“[Millers Point] is only going to be, eventually, for the rich,” he says. “The root of all evil in this is money, nothing else.”

In an opinion piece published by Fairfax Media, Pru Goward claimed that there is “no room for nostalgia” when discussing the fate of Millers Point. Goward cites what she believes to be only “short term anguish [the move]may cause some tenants”. “I remember one day they had about 10 kids in ‘em,” Barney says, describing the billy carts that he and his childhood friends used to race down some of Millers Point’s steepest hills. The carts were home-made, with timber from the wharves and metal ball bearings from the maritime machine shop. Barras, they were called. “There’s no footy oval, there’s no cricket pitch. So our playground was the streets,” Barney says.

Throughout its history, Millers Point’s wharf lineage has been its backbone. Wharf workers, including Barney’s father, used to make their way down onto Hickson Road at half-past six each morning to line up for work along ‘The Hungry Mile’, which leads from Walsh Bay to Darling Harbour.

Barney’s mother worked nearby in the wharf canteen. Her family was poor, as were most others in the suburb.

As a baby, Barney’s sister often slept in a dresser drawer. The Maritime Services Board owned much of the housing in Millers Point until an audit in the early 1980s made residents Housing Commission (now Housing NSW) tenants by default.

Decades before his waterfront work, Barney and his childhood chums used to sneak past the wharf watchmen to get the best fishing spots. They would race their bikes around the streets of Millers Point, and learn to swim down at the Metal Wharf on Walsh Bay, which now houses offices and expensive condominiums.

“That was all our fun, and we wouldn’t swap it for anything else because it was really, really a good time,” he says. “A hard time but a good time.”

“It has been a wonderful life,” he says, before quickly self-countering. “It’s been hard… we’ve been blamed for a lot of things in this area since it first evolved, and one was the bubonic plague. Then they found out it was the fleas on the rats…. No one wanted to live here.”

The New South Wales state government has already begun searching for potential buyers for the high-value properties in and around Millers Point, asking for expressions of interest in both private and commercial circles. Beginning on the 13th May this year, the state government also began showing prospective one-bedroom public housing apartments to the Millers Points residents who are being moved out.

Between 10am and 12pm each Tuesday, in the Phillips Room of the Sirius building, the properties are shown on television screens. Residents interested in the apartments have to bid against each other, before the bids are collected and the winners drawn from a ballot.

Locals are calling it a “public housing lotto”. What’s more, if you miss the lotto the Housing department will decide where you’ll end up moving to.

The blue government-produced banner in the centre of the Phillips Room reads: My Property Choice.

Many Millers Point residents are concerned that a number of the places they’re being shown are in the Sydney suburb of Redfern, which has a crime rate well above the state average, while Millers Point is well below.

Yet, with over 57,000 people on the public housing waiting list, there’s a crucial unanswered question, “Why are they finding us places [to move to]but they can’t find people on the waiting list places?” Barney asks.

Barney wants to live out the rest of his life in Millers Point – to “age in place” is the phrase preferred by Sydney Lord Mayor Clover Moore. Yet there’s an overarching fear that residents can only go along with the state government’s ‘decide what you want or we’ll decide for you’ proposal.

“We’re fearful that the vulnerable people will be signed up and put in one of these places, what we call ‘rat holes’,” Barney says with a smirk. The people who built Millers Point now feel as worthless as the rats who once caused them so much trouble.

Elderly locals are quietly gathering for Thursday lunch as I leave the Harry Jensen Activity Centre. Outside, on the painted wooden panels of the bus shelter, a message has been written in dark permanent marker.