Another day, another gaffe by Treasurer Joe Hockey.

Recent months have seemed like the Joe Hockey comedy show, from celebratory cigars during the budget to the less-than-noble revelations of his recently-launched biography.

Yesterday added another item to the hit parade of blunders, pratfalls and goofs, as Hockey was caught out trying to explain why the Coalition’s fuel excise increase wouldn’t be regressive.

The reason, Hockey argued, was that poor people “don't have cars or actually drive very far.”

Hockey was sticking by the claim this morning, claiming that he was merely pointing out the facts. “The fact of the matter is that I can only get the facts out there and explain the facts, how people interpret them is up to them,” Hockey told 2UE.

We shouldn’t be surprised at this intransigence. Hockey genuinely seems to struggle with the basic arithmetic when it comes to equity. In fact, and as usual when it comes to matters of equity and the tax system, Hockey is wrong. Fuel tax is regressive, and always has been.

You can prove this in any number of ways.

You could point out, as Labor, the Nationals and even Ricky Muir have, that many rural and regional Australians don’t have access to public transport and therefore have to own and run a car, no matter how poor they are.

You could observe that costs like car registration and petrol are the same for rich and poor, so that the poor will spend a greater proportion of their income on these items than the rich. This is what the term “regressive” means.

You could point out that poorer Australians are more likely to live further from their work, for instance in the outer suburbs, and therefore need to travel further, incurring higher transport costs. Griffith University researchers Jago Dodson and Neil Sipe demonstrated this in 2008, using Census data. The New South Wales government’s Transport Master Plan says the same thing.

Or you could just go to the data. Perhaps the simplest way to explode Hockey’s claim is to crunch the Australian Bureau of Statistics’ data on household expenditure, which comprehensively demonstrates that the burden of owning and running a car falls most heavily on the lowest income earners.

The ABS’ Household Expenditure Survey tracks household spending on key items such as housing, food, clothing and transport. Dig into the data and you can quickly build a picture of the average costs of owning and running a car.

The ABS says the average Australian household spent about $193 a week in 2009-10 on transport. That figure includes $36.66 for petrol, $47.16 for the cost of purchasing a vehicle (a figure averaged out over the life of the vehicle), $28.57 for registration and insurance, $20 on parts and repairs, and so on.

The ABS also breaks down this spending data by quintile – in other words, for each 20 per cent of income earners (the poorest fifth, the second-poorest fifth, up to the richest fifth). This data enables us to calculate how much each household group spends on their transport.

New Matilda has crunched this data to come up with a figure for average vehicle expenditure as a percentage of household income, 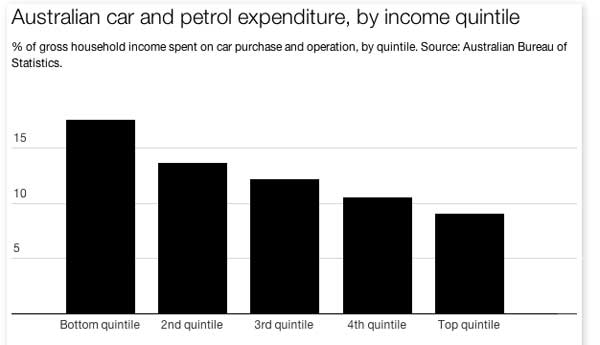 As you can see, the poorest 20 per cent of households spend the most on owning and running their vehicles, while the rich spend the least, as a proportion of their income.

None of this is a surprise. Transport has always cost the poor more than the rich, and Australia in the 21st century is no different.

This means fuel excise is regressive. All indirect taxes are. It’s a basic tenet of tax theory. If Hockey had bothered to read Ken Henry’s comprehensive review of the tax system back in 2010, he would know this.

But Hockey hasn’t grasped such simple tenets, because he has been blinded by the conservative belief that the poor are to blame for their low incomes. He just can’t seem to understand that while the rich do pay more fuel excise than the poor, they pay less as a proportion of their income.

Perhaps Hockey doesn’t want to believe that, because to grasp the concept would be to admit that his entire budget has been regressive – a point he still refuses to concede.

There will be those who dismiss the ridicule by lefty Twitterati as just another 24-hour outrage.

But this stuff does matter. Judged in the context of Hockey’s other policies and public statements this year, it reveals that the Australian Treasurer simply doesn’t understand the basic arithmetic that underlies Australia’s progressive tax system.

The crazy thing about the fuel excise meltdown is that raising fuel excise is actually a good idea. Fuel excise is, among other things, a tax on carbon pollution, and as such it plays an important role in helping Australia address climate change.

As Labor showed when it was in office, it is possible to put in place a tax on pollution while compensating low-income earners. In fact, raising indirect taxes while lowering direct taxes (like income tax) was a key recommendation of Ken Henry’s taxation review. If done carefully, tax reform can broaden the tax base while lowering taxes for everyone, and protecting the poorest.

That’s not the approach taken by the government. Whenever it has had to choose who will get hurt by its tax rises and spending cuts, the government has almost always placed the burden on the poorest.