When Gerard Henderson took exception to the spoof Clarke and Dawe served up last week in the wake of the government’s botched announcement of the proposed new national security telco regulations, he unwittingly pointed to a major problem: the death of satire in Australia.

The episode in question is a gem. Clarke plays a ‘Christian linguistics advisor’, read ‘spin doctor’, proclaiming that the government has re-written the Ten Commandments so that they are more malleable in negotiations.

He explains to Bryan that the Christians currently in government are studying the scriptures, with 1500 linguistics advisors to help them rewrite them for use as policies.

Clarke as the guest spin-doctor, refers to the new interpretation of the Sermon on the Mount as that ‘Left Wing Lecture in the Hills’, and reveals with a note of triumph that the pollies have ‘fiddled with the beatitudes’.

“How did you get that?” replied the Christian spin-doctor. “That’s classified.”

Henderson was affronted by the sketch, telling Barry Cassidy on The Insiders: “It’s all very well for Clarke and Dawe in a tax payer funded studio to have a laugh at all this but this is serious….”

But Gerard, everything Clarke and Dawe satirise is serious. That is the point.

The sad reality is that without Clarke and Dawe there would be no regular political satire on the ABC. That’s right, there is no satirical commentary on the goings on in Canberra on radio or on television except for John Clarke and Bryan Dawe.

Their two and a half minutes each Thursday before the 7pm news is the only satirical offering with an ongoing life, a regular place where we can find comic criticism of our elected representatives and their antics. 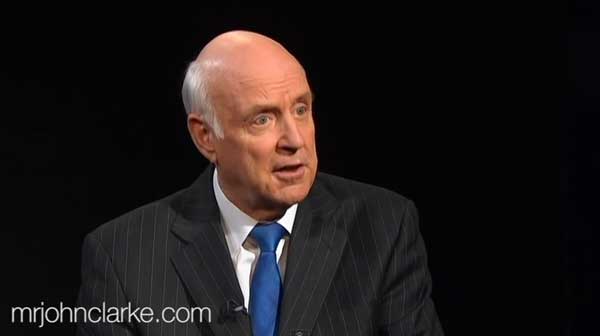 In one of the most colourful parliaments ever, with the likes of Clive Palmer and Ricky Muir, not to mention Christopher Pyne, providing behaviour ripe for a keen-eyed satirist (and the last parliament was not devoid of pantomime either with Katter and Oakeshott ready targets), the absence of satire on the national broadcaster is not just perplexing, it is worrying.

The Chaser team are chastened and not likely to appear for a long time after the debacle caused by their ill judged attempt to lampoon conservative commentator Chris Kenny by showing a graphic of the man engaging in a sexual act with a dog, in an episode of The Hamster Decides broadcast last year.

Clarke and Dawe will never provoke the kind of outrage or disgust we have seen expressed over the Chaser incident: their style relies on subtle comic judgement, restraint and an elegant format. In fact the two styles of The Chaser and Clarke and Dawe represent two traditions of satire that go all the way back to the Romans.

The Chaser are the inheritors of Juvenal, with a taste for the obscene, vicious and misanthropic, while Clarke and Dawe are descendants of Horace, gently mocking our pollies for their venality, stupidity and folly.

We need satire of both kinds. It is central to the democratic process and it’s no surprise that John Clarke, who writes all of the scripts for Clarke and Dawe, sees himself as one of the audience, not as an actor mouthing lines written by someone else, but as a participant in the democracy trying to make sense of the main issues and main players.

This is his satirist’s moral ground: he attempts to say what we can’t, until the next election.

Satire is called a dangerous art for a reason and The Chaser performers are no strangers to trouble. While The Chaser team has been sent to Coventry, it is worth remembering that it was those very Chaser boys who created one of the great satirical events on Australian television.

In 2007 Chas Licciardello dressed up as Osama Bin Laden and the Chaser team drove through the security cordon in the centre of Sydney in a fake APEC motorcade.

Using mocked up APEC stickers on their cars they managed to penetrate the APEC security zone in central Sydney.

It was a breathtaking piece of street theatre, televised for all of us to enjoy. The actors and technical team (11 of them altogether) were charged in court but the charges were dropped because the police had let the pranksters into the APEC zone without checking to see that they were not, in reality, authorised Saudi Arabian officials.

John Clarke created the other great satirical event on television, and it was more politically targeted than the prank played by The Chaser at APEC.

Clarke wrote the apology to the indigenous people of Australia that was delivered by John Howard the actor in an episode of The Games in 2000.

The apology took aim at the fact that the Prime Minister at the time, John Howard, steadfastly refused to make an apology to Aboriginal and Torres Strait Islander people in spite of enormous public pressure to do so. The apology offered its television audience a touchstone for the Howard era, a comic intervention of wish fulfilling whimsy, a careful portrait of political character and a razor sharp critique of hubris.

Why has satire all but disappeared from the ABC? Is it because of the oft-discussed disengagement with politics? Or is it a sign of creeping conservatism in the national broadcaster’s approach to programming, of the Gerard Henderson variety?

Might it reflect the fact that the cast of characters in the parliament are so clownish themselves that satire is more difficult to create, although American John Oliver’s recent compilation video made it look easy.

Perhaps it’s all of those things, and the challenge of capturing the essence of a politician as an actor is not a straight-forward thing.

Cast your mind back to the 1980’s and you will recall the glory days of sketch satire on television in The Gillies Report.

Max Gillies, jowly and pop-eyed, impersonated Hawkie in all his lugubrious populism and the lofty patrician disdain of Mal; each week the full cast presented a big musical production number. There was even an operatic version of the events of 11 November 1975 in a sketch entitled ‘Il Dismissale’ introduced by Clarke as a musical attempt ‘to gloss over the facts’, an opera by Jean-Carlo Trimbole.

We had Rob Quantock’s Australia You’re Standing In it and Tim and Debbie (Stephen Blackburn and Mary Keneally) on radio and then television lest we took our own political views too seriously.

In the 1990’s there was Rob Sitch on Frontline and to help us prepare to host the Olympics we were given The Games with Clarke, Dawe and Gina Riley.

It was a dizzying new genre, the mockumentary, where the politics of sport became the central target of the satire. Since then Australian politics and the horrors of media-driven political culture gave us The Hollow Men in 2008, a more friendly take on spin than its British counterpart The Thick of It.

This week Sitch’s new series Utopia takes the Canberra bureaucracy as its topic and target.

ABC Radio is also barren of satire although there have been experiments, with Radio National taking up Dan Ilic’s A Rational Fear for a limited season last year. It was recorded live at the Laugh Garage in Sydney. Thank God It’s Friday, also recorded live in Ultimo, is a tonic and a platform for so many comedians, but it is not satire.

With the current changes to the ABC and the threat of greater politicisation we might be in for a grim time. Long live Clarke and Dawe. Come back Sean Micallef. All is forgiven.