Since the age of just four, Darrell Eason’s son has played football with Exeter Soccer Club, notching up 28 years of euphoric victories and crushing defeats in the process.

Add to that the fact Eason works as a coal miner, and you could be forgiven for thinking the Southern Highlands resident would vote against his town’s local soccer club returning $7,500 in sponsorship to Hume Coal, a Korean-owned company looking to establish a new coalmine in the area.

But in a surprising twist, Eason – along with the majority of the soccer club’s members – have voted to hand back the money after members raised serious concerns about the environmental impact the proposed mine could have on the area.

The mine is a divisive issue in the community, and when the club was forced to debate the ethics of accepting the sponsorship – badly needed to help subsidise the registration fees of junior players and the ongoing viability of the club – opinions were varied.

So deep running was conviction, Eason feared some parents would pull their children from the club if the deal was maintained.

“When it came to the vote, the vote was split,” Eason said.

With passions running so high, Eason decided the only hope of keeping the club together, as well as the community who coalesce around it on cold weekend mornings, was to give the money back.

“I wasn’t prepared to run the risk of kids losing the right to play soccer in their own community. That’s what changed my mind,” he said.

Eason is the Exeter Soccer Club’s vice-president, and was keen to echo the sentiments of president Sean Elphick, who said the club remained an apolitical organisation.

“From the club point of view, we don’t have an opinion about the coalmining. Individuals have their own opinion but we’re an apolitical organisation, so it’s not for us to be for or against what any business is doing in the community.

“We just respond to what our members want us to do as a board.”

In the end, members decided the money could not stay, and a committee was established to find an alternate source of revenue, resulting in a crowd funding appeal. 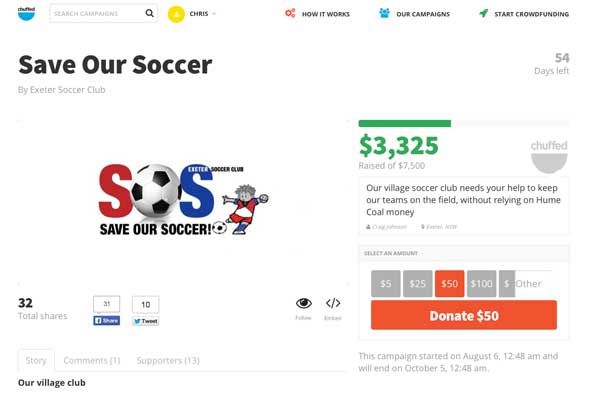 “We’ve had a really good response from the community so far, we’re about half way to our target,” Elphick said.

He said the club played an important role in the community by offering the opportunity for exercise and social congregation.

“It is a community thing – there are a lot of families in the club. Exeter is only a small village, we’re probably the only organised sporting team there that allows the children to play a physical activity,” he said. Tim Frost, Coordinator of the Southern Highlands Coal Action Group, said his group were concerned that the mine being proposed by Hume Coal would damage the local water supply.

“There must be a deal of community concern and action if people refuse their money,” he said.

Hume Coal runs a series of sponsorship programs for local community organisations and encourages them to come forward and apply for funding.

A spokesperson for the company declined to comment when contacted by New Matilda.

If you would like to donate to the Exeter Soccer Club, you can do so here.