The United Kingdom’s most prominent left-leaning newspaper has defended its decision to print an inflammatory ad accusing Hamas of “child sacrifice” after another British newspaper, The Times, refused to run it.

Wiesel refers to Hamas as a “death cult” who are using Muslim children as “human shields”.

“Moderate men and women of faith, whether that faith is in God or man, must shift their criticism from the Israeli soldiers – whose terrible choice is to fire and risk harming human shields, or hold their fire and risk the death of their loved ones – to the terrorists who have taken away all choice from the Palestinian children of Gaza.”

The ad, sponsored by Boteach’s The Values Network, has already run in a number of American newspapers, including the New York Times, The Washington Post, The Wall Street Journal and the New York Observer.

The Times told the Observer “the opinion being expressed is too strong and too forcefully made and will cause concern amongst a significant number of Times readers”.

Boteach responded by telling the Observer: “At a time when Israel is fighting for its very existence against the genocidal terrorists of Hamas, the British media, already famously skewed against Israel, refuses a paid ad that every major American outlet… was proud to run as a full page ad.” 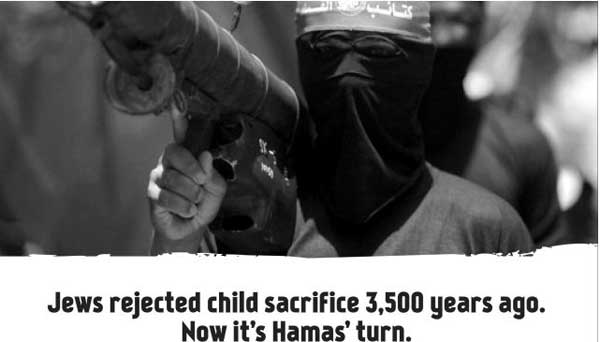 That might come as a surprise to the thousands of British citizens who have marched on the London-based offices of the world’s largest public broadcaster, the BBC, for weeks, demanding an end to pro-Israel bias.

It followed an open letter signed by Noam Chomsky, John Pilger, Ken Loach, Brian Eno and Jeremy Hardy to the BBC director general Tony Hall in July, accusing its news programmes of being “entirely devoid of context or background” in coverage of the conflict.

The Guardian’s Media columnist Roy Greenslade last week wrote his paper’s “acceptance of an advert does not mean, of course, that it endorses the views and claims made within it”.

But The Guardian has a daily circulation of around 197,000 and is one of the most influential left-leaning newspapers in the country.

The story was immediately jumped on by Israeli media, and used to promote the claims Hamas has used its population as “human shields” (there remains no evidence of this practice).

“Read the list of demands and judge honestly whether there is one unjust demand among them: withdrawal of Israel Defense Forces troops and allowing farmers to work their land up to the fence; release of all prisoners from the Gilad Shalit swap who have been rearrested; an end to the siege and opening of the crossings; opening of a port and airport under UN management; expansion of the fishing zone; international supervision of the Rafah crossing; an Israeli pledge to a 10-year cease-fire and closure of Gaza’s air space to Israeli aircraft; permits to Gaza residents to visit Jerusalem and pray at the Al-Aqsa mosque; and an Israeli pledge not to interfere in internal Palestinian politics such as the unity government; opening Gaza’s industrial zone," he wrote in an earlier column for Israeli newspaper Haaretz.

According to the United Nations’ Office for Coordination of Humanitarian Affairs (OCHA), 448 Palestinian children have been killed during Israel’s month-long assault on Gaza. The vast majority of the estimated 1,935 Palestinian deaths have been civilians, with Israel targeting United Nations schools, ambulances and universities.

On the Israeli side, 64 soldiers have been killed, and just three civilians, according to the latest figures.

Meanwhile, the safety of the unborn in Gaza is also precarious. The United Nations Population Fund (UNFPA) has estimated there are nearly 46,000 women in Gaza who are pregnant, and 10,000 of them are displaced. The Ministry of Health reports 160 deliveries are taking place each day, according to OCHA.

A 72-hour ceasefire began over night as negotiations continued.

OCHA reports in the 24 hours following the end of the ceasefire at least five Palestinians were killed as a result of Israeli airstrikes and shelling.

“These include 10-year-old Ibrahim Al-Dawsa, killed yesterday (August 8) at around 17:00 during an airstrike in the Sheikh Radwan neighbourhood of Gaza city, while reportedly playing in the street.”