In memory of Pauline Toner and Linda Zardo

A conga line of medical students once diagnosed me with breast cancer. In an unusually interactive life-modeling gig at the Alfred Hospital, my breasts were hired for med school finals.

Awkward aspiring young doctors filed in and got me to flex and raise my arms while they palpated, plumped and roiled.

Alarmed when they successively concluded from my ‘ropiness’ and ‘density’ that I showed clinical markers of cancer, I asked their examiner to examine me too.

It’s comforting that over a decade ago young doctors were intent on being so excessively vigilant (and that someone was ready-to-hand to disprove them).

Breast cancer had taken my best friend’s mother. It would soon claim a teenage friend. It has threatened the lives of too many colleagues, friends and relatives to count.

It is a heartbreaking, frightening disease written across the country in stories of loss, grit and fortitude. In some way, all of us have mourned its appalling toll.

Breast cancer was 2010’s most common cancer. One in eight Australian women are diagnosed with breast cancer. Despite increasing rates of survival, it was in 2011 the second leading cause of cancer-related death in Australian women.

And its incidence is increasing. 15,270 of us – mothers, daughters, sisters, aunts, friends, workmates, etc – will be diagnosed this year.

That’s a snapshot of the science. It ought to alert you to the scalding sensitivity of the issue, to the investment of affect and trauma, to the critical importance of accurate information, to the need to pay homage to the decades of breast cancer activism by feminists and women’s health advocates, and to tread with statesman-like solemnity, caution and precision in the spirit of educating and informing the public on a matter of life and death.

From the efforts of the McGrath foundation to educate young women to be ‘breast aware’, to the ongoing push to inform the public on breast cancer by Cancer Australia, the National Breast Cancer Foundation and the Breast Cancer Network Australia, these organizations, festooned with pink ribbons, provide invaluable support, ever calling for vital research and ongoing investigation.

But hard science is but soft plasticine in the hands of the ideologue – that much we already know from the Abbott Government’s irresponsible negligence on climate science. 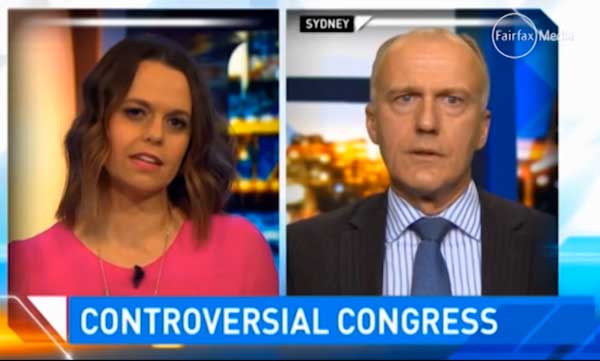 Oh my. Some days the acronyms of credible institutions must seem to circle like sharks for members of the current front bench.

From Hockey’s confected budget ‘emergency’ to Hunt’s discredited Direct Action Plan, LNP members might benefit from some kind of reverse credit scheme, where status discredits buy them off from having their bottoms roasted by Sarah Ferguson.

You can’t help but wonder if Abetz’s swift-short-shrift retraction spread first from his nipples, a chain reaction of gormless self-titivation (hard to resist tweaking in this latest installment to the LNP Gallery of the Gaffe-prone).

As others have ably argued since Abetz’s misleading and deceptive conduct on The Project, lying to women about their health is reprehensibly reckless.

It is also, we should note, a quite deliberate ploy to discourage and scare off women from pursuing their reproductive rights. Indeed deploying breast cancer fear as a subterfuge for anti-abortion advice dates back to 1950s Japan.

Leslie Cannold, in 2002, documented the rise of ‘women-centered’ anti-choice strategy, and its use in legislative advocacy, counseling practice and law-suits by anti-abortion campaigners.

Make no mistake, what this amounts to is the appropriation of two of our most unnerving health risks, and to then set them within a disciplinary causation.

Retraction or not, it is an outright outrage. To her credit Mia Freedman showed remarkable restraint. If I was in the same room, I’d have slapped Eric Abetz. Hard.

For after all is said and done, after the retractions and solemn columns, once the giddy senator is trounced and rebutted, it remains the case that a particular demographic of women was exposed to deliberate and willful deceit – those that adhere, through thick and thin God knows, to the slapstick men of the LNP.

What if I’d entrusted this man with my one sixennial Tasmanian vote? If I hadn’t, as a child, appraised myself of the mendacious propensities of the LNP on the sacking of Whitlam, I wonder whether Abetz’s correctional causality would’ve put the fear of God into me.

What conclusions might I have drawn from my reproductive history, which like one in three women, includes a termination. That my ropy tissue was symptom, substance and wages of my sinful repudiation of maternity?

You see, women vote for these guys – ok, none that I can actually name, but a critical mass, enough, as we’re painfully aware, to get them elected.

There are women listening, trusting, believing – again none that I can actually name, but for the first time in my voting life I’m worried about women LNP voters and any of the women with functioning yet wayward uteruses who go along, dewy-eyed, to the World Congress of Families Conference on August 30th and imbibe their twaddle.

This includes, by the way, that Putin is right to send LGBTs to jail, that homosexuals need to be converted to heterosexuality via Christian therapy, and that women who take the pill are more likely to engage in incest.

Victoria’s Attorney-General, Robert Clark will deliver the opening address at this conference! Federal social services minister, Kevin Andrews will give an address, as will Victorian Liberal senator Bernie Finn!

Federal Liberal senators Eric Abetz and Cory Bernardi are attending! If any of them, any mind you, had uteruses, we might have cause to fear for their reproductive health.

Since they don’t, let us pray these smarmy donklebrains give up the pretence they care about ours.