Another day, another deadly attack on a UN-run school in Gaza.

The latest strike killed 10 people, bringing the toll from the Israeli assault to 1,841 Palestinians killed, with 9,370 people injured and 10,080 houses destroyed.

Claims about Hamas using ‘human shields’ entirely miss the point. Even if the IDF allegations were true (and the UN says they’re not), you don’t respond to someone using civilians as hostages by simply killing the lot of them.

The deaths in the UN facilities epitomize the barbarity of Operation Protective Edge, not only because so many of the slain were children but also because they were killed after having fled their homes, precisely as they had been instructed by the Israelis.

In Gaza, a tiny piece of blockaded territory housing 1.8 million people, there’s nowhere that’s safe, not when the world’s fourth largest military is raining down shells and rockets and air strikes.

An entire population – half of which is under the age of 18 – is being terrorized. The IDF has now destroyed Gaza’s power plant, so that there’s now neither electricity nor water.

Even hospitals have neither power, medicine nor facilities.

But the school attacks matter for another reason, too, for they give added impetus to the case for a boycott of educational ties with Israel.

Back in 2004, a broad cross section of Palestinian academics and intellectuals first called for an academic boycott of Israel. Among other reasons, they explained that the mostly state-run Israeli universities were largely complicit in the oppression of the Palestinian people.

Operation Protective Edge has provided a dramatic confirmation of that claim.

For instance, Tel Aviv University has promised students serving in the attack on Gaza one year of free tuition, while threatening disciplinary action for those who speak out against the assault.

Hebrew University evidently feels the same way, for it has announced a collection of goods including hygiene products, snacks and cigarettes “for the soldiers at the front according to the demand reported by the IDF units”.

But that’s only one side of the story. Another reason for an educational boycott is that Israeli oppression denies Palestinians the chance to learn.

Again, Protective Edge has made that clear. The educational apparatus serving the kids in Gaza has been systematically dismantled.

Ban Ki-moon, the UN secretary general, called the latest attack on a UN school “a moral outrage” and a “criminal act”. But no less than seven UN schools have now been struck, even though, as Ban Ki-Moon said, the IDF “have been repeatedly informed of the location of these sites”.

In any case, the UN schools are the tip of the iceberg. The UK's Department for International Development says that, in total, 136 schools have been damaged or destroyed. Higher education hasn’t been spared, either, with the Islamic University said to be “in complete ruins” after an IDF strike.

In The Saturday Paper, Hamish McDonald has said that “the so-called Boycott, Divestment and Sanctions campaign some are trying to extend into Australia’s universities” is the “opposite of what’s required”.

A boycott, he says, will “leave the field even more to the right-wingers and hardliners who dominate the Israel lobbies here and in the US, and the like-minded guests they invite.”

It’s an argument that reveals the symptomatic blindness of so many commentators on this issue, for it entirely elides the Palestinians from the equation.

McDonald is concerned that a boycott would marginalise liberal-minded Israelis – but it doesn’t even occur to him that the status quo might already exclude Palestinians. 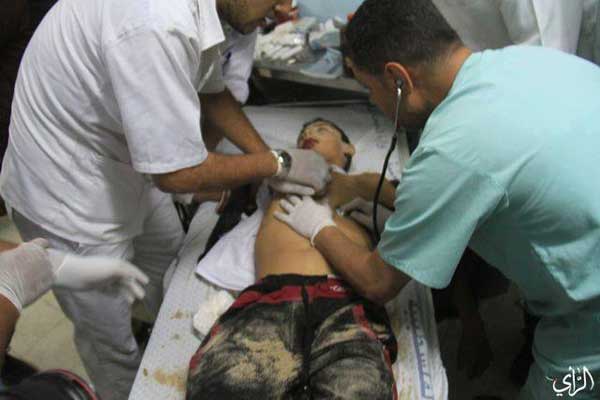 UNRWA reports that one Palestinian child has been killed in Gaza every hour for the past two days. What chance do kids in Gaza have to become scholars, caged in an open-air prison with the ruins of their educational system?

Since the campaign for Boycotts, Disinvestment and Sanctions (BDS) began to gain traction in the English-speaking world, some supporters of Israel claim that boycotts are an innately hateful act.

It’s an oddly contradictory stance, since the same people usually defend the blockade of Gaza – one of the most draconian sanction regimes in the world.

Wikileaks documents from 2008 reveal Israeli officials telling their US counterparts that they intended to keep the Gazan economy functioning at a level barely sufficient to avoid a humanitarian crisis (and bear in mind that even the United States government accepts that Gaza has been occupied without interruption since 1967).

By contrast, the pro-Palestinian boycott is merely an instance of a tactic that’s a normal part of civil life. For instance, when Wicked Campervans painted some particularly sexist slogans on their vehicles, women’s activists proposed a boycott – and the company quickly promised to repaint the more offensive of its vans.

Likewise, when the staunchly pro-Israel Australian Jewish News objected to the Sydney Morning Herald’s coverage of the Gaza crisis, it urged readers to boycott Fairfax.

How then is it illegitimate for Palestine’s supporters to do likewise?

Australia is obliged to implement UNSC sanctions regimes as a matter of international law.

These sanctions are imposed by all the universities. Here’s how Monash describes what it does:

The Sanctions Laws are punitive measures imposed by the Australian Government as a foreign policy response to situations of international concern. The purpose of the Sanctions Laws is to target persons, entities and governments most responsible for these situations.

To give a specific instance, Australian universities apply sanctions against Iran, largely because Iran’s nuclear research might foster nuclear proliferation. If that’s a legitimate basis for sanctions, how can anyone object to similar measures against Israel, a country that consistently refused to sign anti-proliferation treaties – precisely because it already possesses a huge arsenal of nuclear weapons?

As the American activist Larry Derfner argues, applying sanctions to Israel is not about holding that country to a different standard – it’s about treating it in the same way as any other nation, rather than aiding and assisting it and making excuses for its crimes.

During a brief lull in the recent fighting, the US quickly shipped the IDF more ammunition.

Is there any other regime in the world that would receive that treatment?

As the Gaza offensive grinds on, the rhetoric coming out of Israel is more and more violent.

One Israeli newspaper recently published (and then pulled) an OpEd piece advocating genocide against the Gazans.

Another paper carried an article calling for “dismantling Gaza, humanitarian relocation of the non-belligerent Arab population, and extension of Israeli sovereignty over the region” – ethnic cleansing, in other words.

Moshe Feiglin, the deputy speaker of the Knesset, wants to herd the population of Gaza into “tent encampments”, cut off electricity and water to the “formerly populated areas” and then shell them “with maximum fire power”, before sending in the army to “exterminate nests of resistance, in the event that any should remain”.

How should we respond to this insanity? What can we do as Palestinian children die in their hundreds?

A boycott is not a magic solution. But it’s a simple and non-violent way of saying that we want no part in the crimes that are taking place.