It’s a bizarre, four-year-long saga that has brought racial tensions in Alice Springs to the surface and may cause members of the local council to think twice next time they are approached by Freemasons bearing gifts.

A sculpture of Scottish explorer John McDouall Stuart has finally been erected in the central Australian town after initially being unveiled, then un-unveiled, in 2010, when it was gifted by the local Freemasons Lodge to commemorate 150 years since Stuart first reached the area now occupied by Alice Springs.

Revealed with some pomp and ceremony, the work was quickly moved into storage after concerns were raised that the council had not followed proper procedure for public art and complaints from local Aboriginal people.

Alison Furber, an Arrernte woman and artist who lives in Alice Springs, told New Matilda those concerns had not faded.

“We’re very unhappy with that statue being erected,” she said.

While Furber suggested Aboriginal icons such as Charlie Perkins or Albert Namatjira would have made better subjects for a public work, it’s the precise depiction of Stuart which has provoked her and other Aboriginal people to raise their voices.

In the imposing four-metre high statue, Stuart is portrayed holding a rifle, a prop that sits as an awkward reminder of the often-violent history of Aboriginal-settler relations and still unacknowledged frontier wars.

It’s not helped by the fact Stuart’s own diary records an incident with a local Aboriginal group during his 1860 voyage which appears to have left several dead.

“Their charge was in double column, open order, and we had to take steady aim, to make an impression,” he wrote after an Aboriginal group allegedly set on his company.

“Why is he standing up there with a gun? It symbolises murder, that’s the way I see it,” Furber said.

While at times relying on Aboriginal trackers and guides, Stuart also appears to have reserved less than total respect for the “natives”. In April 23, after planting the British flag, he recorded the following:

“We then gave three hearty cheers for the flag, the emblem of civil and religious liberty, and may it be a sign to the natives that the dawn of liberty, civilization, and Christianity is about to break upon them.”

Concerns similar to those of Furber were raised in 2010 by other locals – black and white – including Marie Elena Ellis and Kathleen Wallace.

Alice Springs Mayor Damien Ryan said he was not concerned about the inclusion of the rifle in the statue.

“It was hugely supported when it was unveiled a few years ago. There was a small protest about it but that’s moved on,” he said.

Ryan pointed to the support of a local Aboriginal woman, Betty Pearce to support his claim and noted the existence of the Gathering Garden, located outside the Council’s building, and the well knowne Anmatjere Man statue (below), which shows a large Aboriginal man holding a spear. 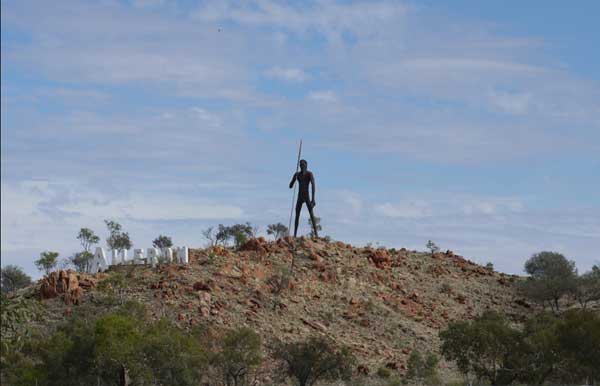 In a double irony, it is located on the Stuart highway, and was designed by sculptor Mark Egan, who also designed the Stuart statue.

Mayor Ryan echoed Pearce’s comments and said Stuart had carried the gun for hunting, although he acknowledged he didn’t know whether Stuart had ever been involved in any violent confrontations or massacres of Aboriginal people.

“John McDoull Stuart was a wonderful man in exploration, but he was a very lonely man outside of it,” Ryan noted.

But not everyone on the council is as enamoured with Stuart, with one councillor – Jade Kudrenko – supporting a suggestion to give it back to the Freemasons.

In an affair that promised to never end, even the Gods of the Alice skies did their best to intercede, with rainy weather delaying the statue’s final placement for one final time earlier this month.

Yet after all the trials and tribulations, the brass figure has now arrived at its final destination, in none other than Stuart Park, near the popular Royal Flying Doctors Service tourist attraction.

Like a racist explorer delivering his bedraggled crew back to the safety and comforts of Adelaide, the Stuart statue is finally home.

And like that same explorer, it may not end up being that happy to have been finally delivered.

Earlier today, ABC reported that a brochure was being distributed around Alice Springs overnight describing Stuart as a "racist murderer".