He was expelled for having invalid travel documents. Cerantonio’s ‘real crime', however, was to be a self-proclaimed Islamic preacher who runs a blog supportive, among other things, of the ISIS caliphate in Syria and Iraq.

He proclaimed on Twitter recently that he would soon go there to visit.

The International Centre for the Study of Radicalisation and Political Violence has described him as “one of the three most influential preachers online”, with a strong following among foreign fighters in the Middle East.

When Cerantonio arrived back in Melbourne, the Australian Federal Police interviewed him for two and a half hours, together, no doubt, with ASIO.

An AFP statement read in part:

Mr Cerantonio’s known social media postings are considered offensive and disturbing, however, have been assessed as not breaching Australian law to this point. The AFP will continue to monitor and assess this material for any breaches of Australian law into the future.

Does the AFP consider the support the Australian government gives to the genocide which Israel is committing right now in Gaza – almost certainly being carried out by, among others, Australian citizens or residents fighting in the Israeli Defence Forces – offensive and disturbing? 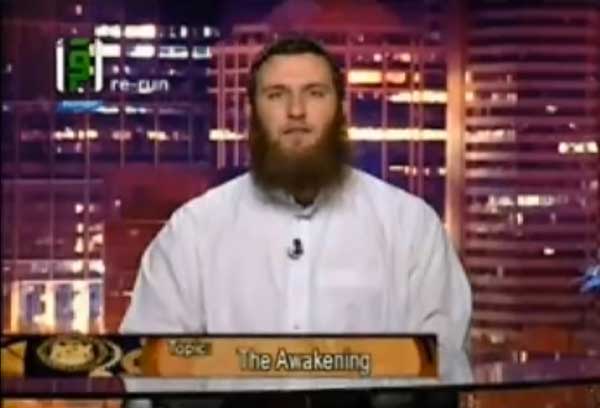 Will those Australian citizens carrying out this genocide be subject to AFP and ASIO interrogation and ongoing investigation for possible breaches of Australian law?

Will the AFP investigate Tony Abbott and Julie Bishop for their offensive and disturbing support for these war crimes and crimes against humanity?

Will the AFP investigate Tony Abbott and Scott Morrison for their offensive and disturbing kidnapping of 157 asylum seekers in international waters and forced imprisonment without charge on an Australian Customs boat?

Or is it only the views and actions of Muslims the AFP finds offensive and disturbing?

Why single out Cerantonio and deny him the right to free speech?

On the contrary, Senator Brandis is using the 'Australian jihadists' beat-up headlines to introduce new laws to the Senate to increase the powers of security agencies and force internet companies to keep customer data for two years.

Under the reforms, journalists could face five or 10 years in jail for “disclosing information… [that]relates to a special intelligence operation".

One can only conclude that free speech extends only to those offensive and disturbing media commentators like Andrew Bolt, who are useful in the right's cultural and economic crusades.

Hypocrisy, your name is libertarianism, another ally in the removal of basic rights to quash dissent as neoliberalism becomes more and more authoritarian.

* John Passant is a casual tutor in the School of Humanities and Social Inquiry at the University of Wollongong and blogs at En Passant.