If you look closely you’ll see they’ve just lit up. Russian insurgents raise a soft toy in salute to nearly 300 deaths on flight MH17. A dead child’s stuffed monkey is in ghastly repose in his meaty fist, its long arms trailing limp. It’s been pulled lifeless from the wreckage, intact, unmarked.

The newly lit fags insinuate muddled undisciplined rebels. The toy evokes a lost child. But as the world condemns the rebels for contamination – perhaps looting – of the site, along with exclusion of investigators and of abusing protocol towards human remains, this toy has come to poignantly attest the anguish of relatives debarred from repatriating their loved ones and their last belongings.

The photo puts us on notice: given means, a motley gang of ham-fisted yokels might arbitrarily and summarily extinguish the life of any child, and then stand guard over their remains despite world condemnation.

But the image inscribes a particular kind of vulnerability, quite distinct from that of children to drone attacks and air strikes – nearly 200 over the last five years in Pakistan, Yemen and Somalia, or 70 Palestinian children by this round of Israeli airstrikes, and rising.

Each time our world tours through the shock and grief of atrocity a photograph comes to the fore that describes at a glance the complex geopolitical coordinates of the incident while seeming to reach beyond the frame of documentation, to instate the only credible moral position.

It is swiftly circulated as though answering unmouthed prayer. Conflating knowing with seeing, it sweeps away any equivocation that photographs are evidence. 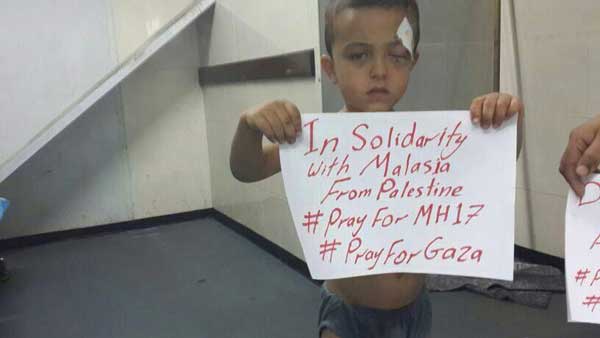 Whether the plane was shot down accidentally becomes immaterial. The photo provides an interpretive framework for the entire scenario, imposing, as Barthes so famously said, ‘meaning at one stroke’.

Collectively we can call up images that have shifted the axis of perception, galvanized entire movements and altered world events – perhaps none so iconically as that of Kim Phuc, the napalmed Vietnamese nine-year-old trying to outrun her burning skin.

Now a UN ambassador for peace, her photographed ordeal placed child victims to the fore in the theatre of modern warfare, changing attitudes to conflict just as civilian casualties were overtaking those of armed personnel.

Growing numbers of child casualties in conflict provide a leitmotif for the atrocity of indiscriminate targeting.

In other circumstances the photo might parody a game hunter’s trophy. The insurgent was nevertheless alive to its poignancy. He no doubt held it aloft to accuse his Ukrainian adversaries of perpetrating the crime.

Grim-faced beside him a blighted young man looks on through tight features.

A cannier insurgent stands behind him furtively facing off under a balaclava.

Displaced from its natural habitat to the debris of a Ukrainian field the monkey tells us a nursery somewhere is empty tonight, and those grieving are enduring a cruel wait for the remains they desperately need to lie to rest.

80 children died in this shambolic calamity. Meanwhile over in Gaza, the deaths of scores of Palestinian children evokes no such outrage.

But the images of four cousins crumpled on the beach, and of little faces peaking through wrapping in a morgue are circulating social media and spurring demands for ceasefire.

A bandaged child injured in an Israeli airstrike holds aloft another notice; ‘In solidarity with Malasia from Palestine #Pray for MH17 #Pray for Gaza’. This little boy, one eye swollen shut, reminds us that when any child becomes a casualty of indiscriminate and disproportionate violence we are all of us bound to act.

If we are diminished by the loss of a life, none more so than a child’s, since it is only we adults empowered to destroy and defend them.

The MH17 image hinges, within the span of this rebel’s outstretched arms, ultra-nationalism with hyper-masculinity.

Lost children, summoned right before our eyes, entreat us to bear witness to its lethal toll.

We are habituated to consume their ‘suffering as spectacle … and then put it to one side’ as Jane Lydon has recently argued.

Such photographs should be witnessed as ‘testimonial’ to the complex mesh of factors creating the conditions for these atrocities.

How they calculate the comparative value of children’s lives in disparate conflict zones also needs consideration.

Russia claims to be hosting 14,000 child refugees from Ukraine – though it is said they have inflated the figure.

Clutching diametrically opposed toys in each hand the insurgent trains a Russian equipped automatic weapon on the disputed territory behind him, a desecrated mass grave at his feet.

Such photojournalism warrants looking and then looking into how we can act.

We each have a personal gallery of such images and footage, increasingly focused on child victims.

They swim up through the windscreen in traffic, darting through our averted vision and dreams with spectral menace.

For Westerners they disturb the peace by calling attention to the unnoticed, removed violence our peace depends on.