In January last year, the 26-year-old issued a press release purporting to be from ANZ, announcing it had withdrawn $1.2 billion in funding for Whitehaven Coal’s Maules Creek mining project.

The press release cited environmental concerns, and was reported by several news agencies.

But it turns out those who sold in the 23 minute frenzy may not be so angry at Moylan now. Whitehaven’s share price has fallen sharply in the past 18 months, and now sits below $1.50. 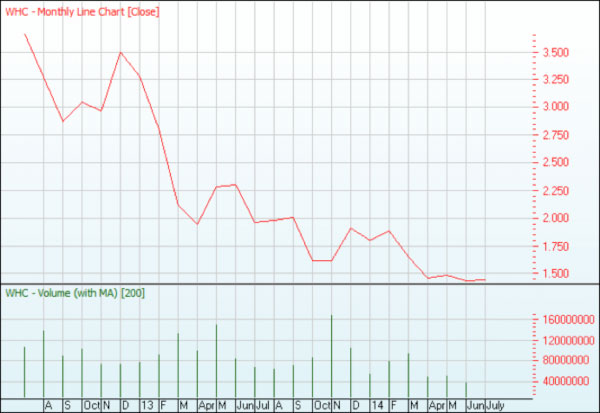 Moylan was subsequently charged with breaching market manipulation provisions in the Corporations Act. He pleaded guilty in May.

The provisions have a maximum penalty of 10 years imprisonment and up to $495,000 in fines.

In Friday’s sentencing hearing, the Crown submitted that because Moylan did not seek a profit he should not receive a custodial sentence, but a sentence of imprisonment should still be imposed.

This could mean an Intensive Correction Order, which means community service paired with other restrictions, such as a curfew and unannounced home visits.

The defence argued for a conditional release.

In sentencing, Justice David Davies will have to weigh the importance of the integrity of the market against the unusual type of white collar criminal before him.

Moylan lives in, and sent the fake press release from, a tent in Leard State Forest in NSW’s north.

There, a group of environmentalists called the Frontline Action on Coal are blockading construction of Whitehaven’s Maules Creek Mine.

The judge put it succinctly when he noted: “The offence is a white collar crime, but its commission here is a bit removed from that.”

Moylan’s defence counsel, Robert Sutherland SC contrasted Moylan’s case with others involving market manipulation, noting out that offenders usually sought and made significant profits, and that their crimes were difficult to detect. That is clearly not the case here.

The court heard an apology letter from Moylan in which he expressed his “deep remorse” to anyone who had traded in Whitehaven Coal on the basis of his press release, and who may have suffered financial loss.

His intention was to draw attention to the ANZ’s investment in the coal mine, not to cause people harm, he said.

“The fact that the release intended to generate publicity led to trading was a complete surprise,” Moylan wrote.

“Causing harm to others is not part of my approach to nonviolence.”

He apologised especially to those whose retirement savings may have been affected by the hoax.

New details also emerged about how Moylan pulled off the hoax, which Sutherland described as “not sophisticated”.

Moylan copied the format of ANZ press releases and sent his out from media@anzcorporate.com, a domain name he purchased for under $30.

The release was sent to 295 recipients at 98 media organisations.

He used the name of a real ANZ employee, changing his own voicemail to suggest that it was that of Toby Kent from the ANZ.

Moylan posed as Toby Kent when he was contacted by journalists and other callers, including the Sydney Morning Herald’s Ben Cubby.

The Crown argued that the degree of planning involved demonstrated an expectation that people would be deceived by the press release.

Before sending out the fake release, Moylan researched the NSW Crimes Act and Commonwealth Criminal Code to see whether he was committing offences of identity theft or issuing a false document.

He overlooked the Corporations Act.

Moylan also researched the ‘Yes Men’, an activist group who impersonate those in power to draw attention to social issues.

The group performed a similar hoax to Moylan when one posed as a spokesperson for a chemical company responsible for a chemical disaster on television.

Perhaps it should not have been so easy for Moylan to cause such damage. Sutherland suggested that irresponsible journalists who chose to “publish and be damned” were more responsible for the nine per cent share plunge than Moylan.

“They, more than Mr Moylan, should be held to account for the effect on the market,” Sutherland said.

Its journalist rang the number Moylan provided in the press release and left a voicemail, but was happy to publish without speaking to ‘Toby Kent’.

That meant it appeared on websites of news sites like Yahoo!7, NineMSN, and Fairfax without their editorial oversight.

The Australian Financial Review and the Business Spectator also published the false story.

The AFR’s reporter called Whitehaven Coal before posting the story but did not manage to get through to a company spokesperson. It was only after the journalist called ANZ, when the story was already posted, that they realised the story was false.

The Business Spectator re-reported the news that was already live on the AFR’s website. Bloomberg did the same thing.

More responsible journalists called ANZ, and were told the press release was fake.

The court heard that Moylan was surprised journalists released the information as true. His intention was apparently that ANZ would have to acknowledge that there was a fake press release and confirm its loan facility to Whitehaven.

Another question is the propriety of ASIC throwing the book at a scruffy-looking greenie, but letting others get away with much worse.

As NM has reported, it failed to investigate damning claims about the Commonwealth Bank’s financial advice.

A former ASIC lawyer told a recent Senate inquiry that he was pressured to favour the big end of town over investors.

The Senate inquiry’s report also criticised ASIC for its habit of striking deals with business and accepting ‘enforceable undertakings’ instead of pursuing litigation.

Outside the courtroom, around 100 supporters expressed their solidarity with ‘Stand With Jono’ signs.  The number of supporters meant that the sentencing hearing had to be moved to a bigger courtroom than had originally been planned. 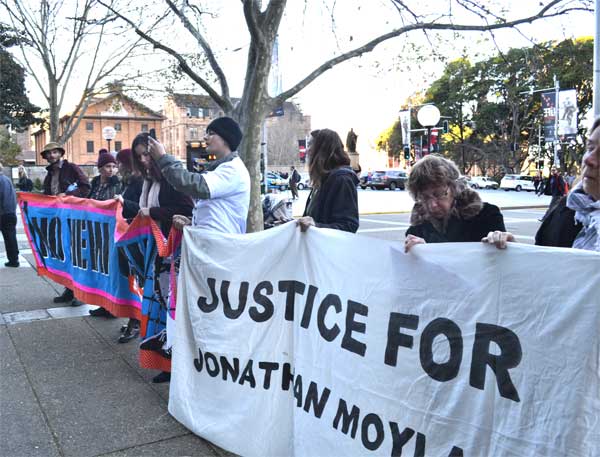 A Facebook page, ‘We Stand With Jonathan Moylan’ has garnered over 6,000 likes.

Among Moylan’s supporters outside court was Greens Senator Lee Rhiannon.

Criticism has not affected the Greens’ support of Moylan.

Environmentalist Kitty-Jean Laginha has been part of the Leard blockade and stood in solidarity with Moylan outside the Court on Friday. She said she supported Moylan because he stood up for those who aren’t being listened to.

“Jono is being punished for an unlawful action, yet there is corruption present at almost every level of the mine” Ms Laginha said.

“There could be huge penalties imposed on one individual, but the injustice of the government blatantly ignoring the significant community opposition to the mine is not acknowledged.”

Rick Laird, a farmer from Maules Creek, was also outside the courtroom.

“ANZ’s loan means Whitehaven Coal can turn Maules Creek from a farming village into an open-cut pit,” he said in a media release.

“We rely on groundwater to water our livestock and for our household water supply, and the Whitehaven Coal mine will lower our water table by 5-10 metres.”

Others would not be so happy about Moylan’s escape from jail time.

Mark Vaile, former Nationals leader and chairman of Whitehaven, denounced Moylan as ‘unAustralian’ in the aftermath of the hoax.

Senior Labor figure Joel Fitzgibbon asked ASIC to ‘make an example’ of him.

The Australian wrote that he had a ‘delinquent mind’.

Meanwhile, protests continue against the Maules Creek mine development in the Leard Forest. Seven people have been arrested in the past week.

And last December, an unsuccessful challenge against the mine was mounted in the Federal Court on the basis of then Environment Minister Tony Burke’s speedy approval of the mine.

Justice Davies has stood the Moylan matter over until a date to be notified.