Aboriginal activists in Sydney have claimed a victory – however short term – in the most recent skirmish over plans to redevelop the iconic area of Redfern known as ‘The Block’.

Over 150 activists, tenants, elders and students gathered early Monday morning after reports that bulldozers would be sent in to begin construction on the controversial Pemulwuy project, which would see commercial developments for non-Aboriginal people built on The Block.

After protesters occupied a roof overlooking the site and dropped a banner this morning, police taped off a street entrance, but by 9am it had become clear no construction teams would be arriving and protesters eventually agreed to come down without incident. 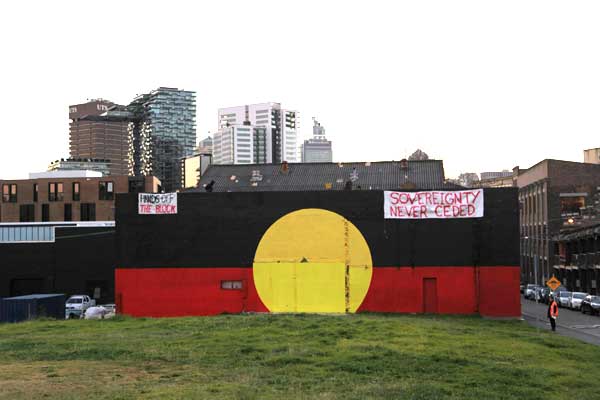 Jenny Munro, a well-known Aboriginal activist and spokesperson for the Redfern Tent Embassy established on the site told New Matilda the protest, which included banners exclaiming ‘Black Land, Black Law’, ‘Hands Off The Block’, and ‘Sovereignty Never Ceded’, had prevented work from beginning.

“We certainly had a moral victory here today,” she said.

Opposition to the Pemulwuy project has been building in recent weeks, with a tent embassy erected and opponents of the plan claiming it would continue the evacuation of Aboriginal people from the iconic spot, granted to the Aboriginal Housing Company (AHC) in 1972 (you can read more about the history of The Block here).

While plans for redevelopment include 62 affordable housing units for Aboriginal people, opponents believe the number is not high enough, and are angry that student apartments and commercial spaces will be built on the land, with the assistance of private developer DeiCorp.

Munro told New Matilda that Aboriginal land shouldn’t be used to help the University of Sydney find accommodation for students.

“I’m definitely in opposition to the commercial precinct and I’m also opposed to the student accommodation,” Munro said.

“I think it’s extremely arrogant for the University of Sydney to impose their housing needs upon this community.

“We’re the poorest community anywhere in the country.”

While the University of Sydney has consulted with AHC during the development of the housing, it is not working in partnership with the organisation.

"Aboriginal activists are right to be anxious when the only concrete proposal from the housing corporation is a development that doesn't guarantee an Aboriginal presence,” he said in a statement provided to New Matilda.

"It is little comfort when the corporation says that, if it is successful getting state or federal funding, it may in the future build affordable housing for the Aboriginal community in Redfern.”

“Our first priority – and we’re very passionate about that – is Aboriginal Housing, Mundine said. “If we just build affordable housing we will fail, that’s why the commercial housing is so important.”

Despite listing its opening hours as 10am-5pm Monday to Friday, the AHC was not answering calls today.

When contacted to confirm whether construction on the Pemulwuy project was intended to start today, a DeiCorp receptionist told New Matilda they were not able to assist with comment and hung up. Munro said that expanding the number of housing units for Aboriginal people and dumping the commercial aspect would be more sustainable in the long-term and that the tent embassy would remain in place until the AHC held a member’s AGM.

Redfern sits on the land of the Gadigal people of the Eora nation, but has been an important place of Aboriginal culture, identity, and community for many different groups in recent decades.

The Pemulwuy project was developed after the AHC took independent advice from a team of independent urban planning experts. In 2009 it received planning approval by the NSW Department of Planning.

With the tent embassy erected on the site, and its camp fire still burning, it’s clear the long running dispute over the future of The Block will not be resolved any time soon.