When Jimmy was finally brought to hospital, too weak to walk, he was treated by an Indonesian nurse.

Ashamed and scared after he was told that he had an incurable disease he had contracted through sexual intercourse, he left and no-one from the hospital has contacted him since.

Indeed, most healthcare staff in Tanah Papua are still Indonesian migrants from other parts of Indonesia who do not speak local languages and sometimes have little knowledge and affinity with indigenous cultural beliefs and practices.

Most institutions, in particular the Ministry of Health, are still run by migrants. The doctors and nurses are often overworked and do not have the time or resources to accompany patients not only medically, but also spiritually.

A handful of NGOs are trying to fill this gap, but do not have the manpower to accompany more than a handful of people.

The result is that a majority of HIV positive patients do not follow ARV treatment, which would be able to offer them an almost normal life.

Anthropologist Lesley Butt found in her research that in the rural interior, where most of the indigenous population resides, and where health services are at their worst, only between 6 and 10 per cent of tested HIV-positive persons are receiving ARV treatment .

Available but not accessible

Almost three-quarters of indigenous Papuans live in remote rural areas, and they must walk, sometimes several days, in order to access health care.

There are extremely few functioning health facilities outside of urban centres with Voluntary Counselling and Testing (VCT) services available only in most bigger urban centres.

The two Papuan provinces are, on the one hand, the richest provinces in terms of natural resources in Indonesia. On the other they have the lowest human development index of the country.

Indonesia’s 2001 special-autonomy law was aimed at addressing the structural problems in Papua such as the lack of access to basic education and health infrastructures.

In order to provide better facilities, the division of large areas into smaller administrative territories was promoted as the best approach.

New regencies have been appearing at an alarming rate, with the subsequent creation of new towns to house the newly formed local governments.

But the ongoing decentralisation and administrative division of districts has not been accompanied by an equal support from the central level to transfer the management of the health and educational system.

This seemingly uncontrolled creation of new regencies and districts may benefit the local political elites by giving them access to huge development funds and more political power. However, these officials are unprepared and are not sufficiently supported to develop functioning educational and health centres.

Papuan commentators predicted that special autonomy would be a nightmare to implement, but they were ignored at the time by Jakarta.

Theoretically, an increasing number of provincial and regency administrative centres may offer more access to health and education.

However, it has been observed that staff previously beforehand worked as nurses or midwives in primary care centres have now been promoted to administrative or management positions, leaving essential healthcare positions vacant.

Replacement staff are slow to be hired or difficult to find.

Doctors originating from outside the province might be willing to work in remote districts, as it is financially and professionally interesting, but rarely stay after their first year of service.

Some remote community clinics are empty shells with no staff: some of the doctors leave because of the lack of support facilities or because they did not feel safe.

Management and supervision of staff, staff presence at their position, attraction and retention of health staff are serious challenges for the district health system.

Another facet of the fight against HIV is awareness raising, with school being a primary place of information dissemination among vulnerable populations.

But the education system in Tanah Papua is facing similar problems, with a grave shortage of qualified teachers.

When senior high school students were asked about HIV/AIDS modes of transmission during one of the rare awareness-raising workshop by a local NGO, a majority of them stated that the virus was transmitted through mosquitoes and were not aware that no cure for the disease has yet been found.

A worrying amount of teenagers also believed that the virus could be transmitted through kissing and shaking hands.

Anthropologist Jenny Munro rightly reminds us that ever since Papua became part of Indonesia, schooling has always been primarily aimed at inculcating Indonesian identity and spreading national messages, rather than advancing literacy, mathematics or other basic skills .

In 2010, the Papua provincial government in partnership with UN Children's Fund (UNICEF), introduced a decree to integrate HIV education in schools in Papua Province, which included curriculum development, teacher training and HIV policy support at the district level.

International organisations, including AusAid, have increased funding for diagnosis, treatment and care. 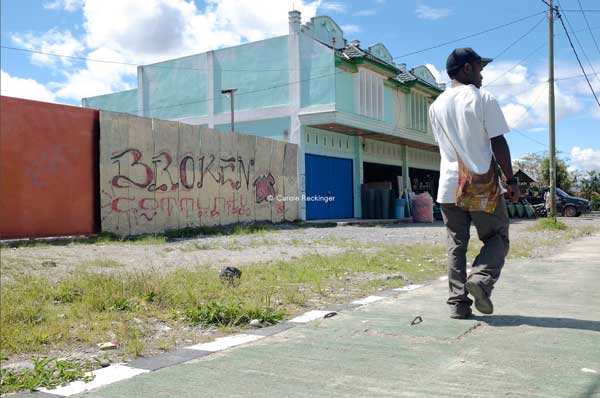 The poor standards or complete lack of health services and education throughout the region, however, not only facilitate the spread of the disease, they also severely impede any efficient response to the epidemic.

Indeed, although the provincial governments have made HIV testing and treatment free, many Papuans do not have access to health care or education and are unlikely to be reached by awareness raising campaigns any time soon.

In order to successfully curb the spread of the virus, it is essential to recognise the cultural, historical and socio-economic diversities between the different Papuan and Indonesian communities.

Sexual encounters at a younger age and a wider range of partners, prostitution and alcohol abuse among the indigenous community are helping abetting the spread of HIV, but it is necessary to analyse this behaviour as a result of the current political, socio-economic and cultural context in Papua.

Behavioural change, the keystone of any prevention campaign, will not be achieved through continued patronizing and scolding of the Papuans' for their 'promiscuous behaviour'.

Nor will awareness and prevention campaigns succeed if they continue to be developed by Indonesian bureaucrats in Jakarta, unaware of the cultural and socio-economic realities of Papua.

Often replicating initiatives in place in the rest of Indonesia, where HIV is localised and concentrated among intravenous drug users, sex workers and men who have sex with men, these campaigns have proved unsuccessful.

But even if they take the cultural context into account and use other means of communication such as story-telling and local languages to increase their reach and sense of ownership among the indigenous population, such as some successful Papua New Guinean programmes have done, these campaigns will not have any significant impact without a real change in the Indonesia's approach to Papua as a whole.

For Papua's indigenous population to survive the threat of the HIV epidemic, a unified, culturally appropriate awareness raising campaign must be implemented from the bottom up, with the support of the national, regional and local governments.

Parallel to this AIDS-centred campaign, another campaign must be implemented, a radical effort to increase the livelihood opportunities for the indigenous population through the recognition of their traditional lifestyles and norms as equally valid as any other, as contemporary rather than backward.

This also means a campaign directed at Indonesians inside and outside of Papua in order to change perceptions, removing the focus from the Papuans' so called propensity to violence and constant threat to national unity.

Increasing Papuans' sense of self-worth also requires anti-discrimination campaigns and legislation; an end to military and police abuse and impunity; a concerted political effort to end corruption and encourage sustainable development programmes; increased access to education and health services; both systems being culturally appropriate to the Papuan world views.

These are but a few of the elements that could, if tackled head on, reduce poverty and marginalisation among Papuans, therefore abating risky behaviour.

In the meantime, all around Jimmy, among family friends and strangers, HIV keeps advancing at an alarming rate, across tribal and generational boundaries, following only the patterns of societal dysfunction.