When Jimmy, a 23-year-old member of the Dani tribe, felt weaker and weaker after some years panning for gold close to Timika, he was at first reluctant to visit a doctor.

Reluctant to go to the public hospital, he took advice from a friend and had a pig killed.

Its entrails were checked for signs of the source of his illness. He was made to follow a herbal treatment, but Jimmy did not feel better.

After developing a terrible cough and losing his appetite, he was soon unable to stand in the cold water and pan for gold all day long.

So Jimmy spent his remaining savings to buy a flight home to the highland town of Wamena.

Only when he was unable to get out of bed did he accept an offer from his wife's family to bring him to hospital, where he was diagnosed as HIV positive and suffering from Tuberculosis.

Jimmy is not an isolated case and many indigenous Papuans only attend hospital and use ‘modern’ medicine when they are incapable of walking or working. Most of those who undergo HIV testing do so because they are showing serious signs of reoccurring opportunistic diseases such as tuberculosis, dysentery or pneumonia, meaning that they are already at an advanced stage of the illness.

When Jimmy received the news that he has an incurable disease he felt confused, scared and ashamed. He decided to keep it a secret and not to tell his wife and family.

The belief that people who are HIV positive are the victims of a curse or are being punished for a sin they have committed is widespread among indigenous communities.

People known to be infected with HIV might not be at risk of being burned alive anymore, as was the case some years ago, but the stigma is still strong.

The fear of stigmatization stops people from sharing their experiences and makes them reluctant to get tested.

Many of those who get a positive result do not return to the hospital and do not follow any treatment.

Papua has seen a long-standing resistance by indigenous Papuans towards the Indonesian government, some of whom view rule by Indonesia as active colonisation.

The controversial takeover of Papua in 1969 and the ongoing abuses by the military and police forces has left deep scars in the Papuan psyche.

A fragile peace is secured through mainly repressive tactics, a degree of indigenous capitulation, and the increasing expectation on behalf of the Papuan population that the government is a reliable source of wealth, especially since special autonomy, known as Otsus, was implemented in 2001 (including cash and food handout programmes).

Otsus established provisions that surpass the autonomy conditions for other provinces and envisioned enhanced autonomy for Papuan communities and their institutions.

The law was meant to address both the sources of political unrest in Papua, and the challenges ordinary Papuans experience on a daily basis.

Twelve years on, however, everyone seems to agree that Otsus has failed to deliver on its promises, and popular support among indigenous Papuans for the ongoing resistance movement and the dream of Merdeka – independence – continues.

A lack of knowledge about the modes of transmission, coupled with the long running political conflict and the climate of mistrust and fear it has created, has led to many misconceptions and a number of conspiracy theories.

Many Papuans view the health system as part of the Indonesian colonial machinery, and rumours are rife that HIV was intentionally introduced in order to exterminate the Papuan people in their land.

A common belief among highland Papuans is that chicken served in restaurants (mostly run by non-Papuans) is injected with the HIV virus to intentionally infect them.

The fact that these conspiracy theories can flourish is a good indicator of the Papuans' feelings towards the Indonesian authorities.

These misconceptions about the virus have a direct impact on the lives and welfare of people living with HIV/AIDS.

Many Papuans are suspicious of awareness raising campaigns conducted by Indonesians, and some are even reluctant to visit hospitals staffed with Indonesian nurses and doctors.

The rapid social changes since the Indonesian takeover and the imposition of a capitalist system have led to a considerable ‘anomic’ generation of young Papuans.

This generation finds it difficult to define its place in society, ill at ease in the middle of two different socio-economic and cultural systems.

Many Papuans feel uncomfortable to participate in the traditional customary rituals as they consider them out-dated, but they are not able to profit from the capitalist consumerist system either as they often lack the spending power and the qualifications required to take part in these modern rituals. This loss of identity markers and disorientation has led to low attendance of formal education, considerable alcohol abuse and domestic violence amongst others.

The inferiority complex of many young indigenous Papuans, exacerbated by the mainstream Indonesian discriminatory attitudes that view indigenous Papuans as stupid and backward, leaves them prone to falling into poverty and risky behaviour that may further affect their health status.

In the media and in the general discourse about HIV in Papua, Papuans themselves are blamed for the high infection rates because of their alleged promiscuous behaviour, careless casual sex and wife swapping.

The relationships between culture and contagion tend to get oversimplified and behavioural patterns are rarely analysed in context.

What is often forgotten is that the settlers' gaze has very real outcomes in the everyday realm.

The dominant values in the highlands of Papua are increasingly embodied and influenced by the thousands of settlers who have moved from elsewhere in Indonesia.

Fair skinned is, for instance, a beauty ideal, and the migrants increasingly enact ideals concerning ‘correct’ sexual and reproductive behaviour.

Over the past half-decade, long-standing values about courtship, pre-marital sex and reproduction are being radically challenged.

Casual sexual relations were previously controlled by social norms and taboos and families and clans held much more control over marriages. But these have been severely eroded by the loss of cultural identity and the rapid changes that have come to Papua in recent decades.

New opportunities and their pitfalls

Over the past half-century, the different indigenous groups have been faced with many changes, including Christianisation, Indonesian colonisation, imposition of capitalism and a market economy, the destruction of their environment etc.

Many men have lost their traditional roles as hunters, gatherers and or warriors.

A lack of opportunities in rural areas and new travel opportunities offered by new roads and airports have drawn men to towns, in search of work, to seek an audience with local government officials, or by simple curiosity.

The anonymity of the urban setting makes it easier to engage in casual sex, and this increased mobility is further fuelling the spread of HIV.

The influx of money to villages is also having an impact on behavioural patterns, especially heads of villages or others with salaries who are increasingly taking on second and third wives. 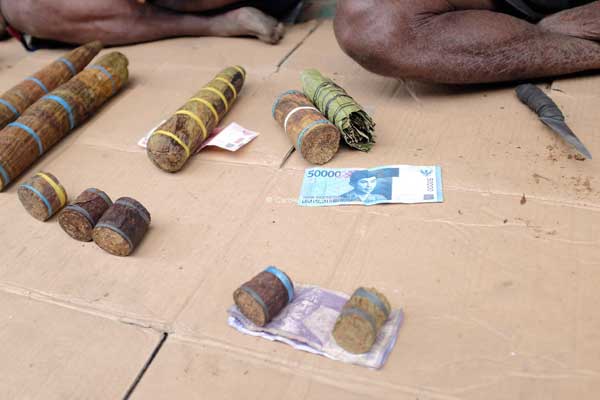 It is, however, not the Papuan cultures, which are more prone to careless sex and wife swapping, but the social upheaval in recent years, which has led to this situation.

The cultural boundaries and norms that used to regulate these practices, confining them to very specific and rare situations, have now broken down, opening up access to such practices to wider groups.

These changing sexual behaviours are, however, seen as static by most observers and workers on the field.

It is counterproductive to blame Papuans for their promiscuous and careless behaviour, as it ends in shame and isolation for those infected.

Settlers still dominate the fields of healthcare, social services and education and often look down on Papuan culture and behaviour as backward.

The Papuans' reluctance to rely on the public health system and their low performance in education are also used to blame high infection rates.

Once again, an analysis in context of these patterns should be done.

In part 3 of this series on HIV/AIDS in Indonesian Papua, the education and health systems in the region will be analysed. It will also aim to present some possible solutions for abating the epidemic in Tanah Papua.