In Wamena, the main administrative and transport hub in the Papuan highlands, we meet Jimmy, 23.

The young man from the Dani tribe is emaciated and has not left his small wooden and corrugated iron hut for weeks.

A few years ago, like so many other young men, he left his wife and child to look for opportunities in Timika, a mining town an hour's flight away.

There he panned for gold in the Freeport mine tailings of the Ajkwa river.

Each day, he and a group of indigenous men from all over Papua stood in the murky water all day long, swirling the river sand in metal woks, gathering gold dust.

He lived in a makeshift camp close to the river and, once a week, he walked down to town to sell his gold in one of the 40 Indonesian-owned gold shops.

He managed to make quite a bit of money, but with no family close by and only rare visits home to his wife and family, he had nothing much to do during his free time.

To keep his mind busy, he spent most of his income on alcohol and women. After a couple of years he became increasingly weaker and was soon unable to keep working.

He returned to Wamena and a few weeks later was diagnosed as HIV positive, and suffering from tuberculosis.

The Grasberg mine, operated by Freeport-McMoran, holds the world's largest gold reserves and is Indonesia’s biggest single taxpayer.

The exploration and exploitation contract was signed in 1967 by the Suharto government, two years before Papua was controversially integrated into Indonesia through the ‘act of free choice’. 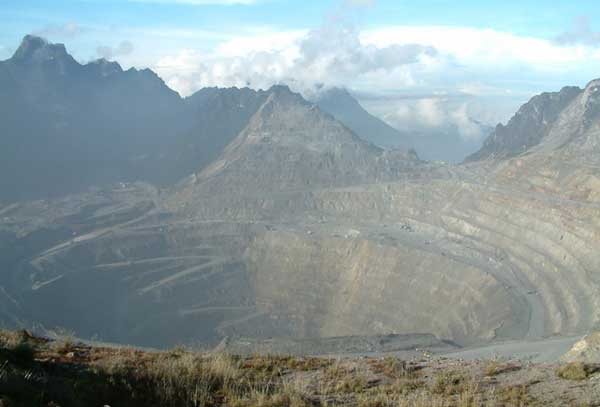 The richness of the ore allows for very low production costs and the tailings discharged into the Ajkwa river system still contain, besides high levels of cyanide, mercury and other heavy metals, relatively high contents of gold and copper.

This makes it very profitable for thousands of small-scale gold panners like Jimmy, a majority of who belong to indigenous tribes from all corners of Tanah Papua, to search for gold.

They have limited equipment and expertise at operating in hazardous conditions and the safety precautions are minimal to non-existent.

Life in the makeshift camps is dangerous, and far from deterring the trade, Indonesian security forces allegedly organize the transport of miners and supplies to camps within restricted zones, taking their cut from the miners' finds.

At the time of Freeport's arrival in 1967, the original indigenous landowners of the area – the Amungme and Kamoro – numbered several thousand people, organized in clan-based village social and governance structures.

The Kamoro practised a subsistence economy based on hunting and gathering in the lowlands and the Amungme sustainable agriculture in the highlands.

With the opening of the mine, Freeport confiscated land and was not required to pay compensation for the loss of food gardens, hunting and fishing grounds, drinking water, forest products, sacred sites, and other elements of the natural environment upon which the indigenous cultures and livelihoods depended.

Already highly weakened by displacement and economic hardships, these communities were then faced with the influx of Indonesian workers employed by the mining company, which led to a new economic, social, political and cultural marginalization.

Despite Indonesia's Papua region being home to some of the world's largest resource extraction projects generating massive wealth for multinationals and the central and provincial government, a majority of indigenous people still suffer from poor health as well as an increased social and economic marginalisation.

When Freeport McMoran arrived, several hundred people were living in the lowland village of Timika.

Now it is the fastest growing city in Indonesia, growing by 10 per cent a year and currently home to over 130,000 inhabitants. 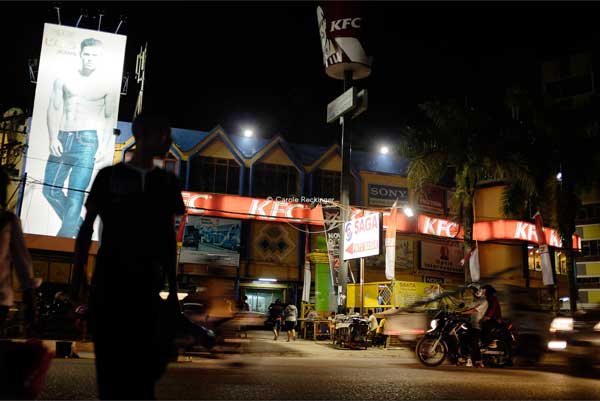 It is a boom town reminiscent of the American Wild West, with its mix of quick money, alcohol, prostitution, venereal diseases and HIV for a majority of indigenous Papuans.

But the foreign contract workers and the Indonesian mid- to high-level employees of the mine live in gated communities with golf courses, 5 star hotels and international supermarkets.

In town, Indonesian newcomers control most of the commercial and economic activities.

For Indonesians moving to Timika or any other city, Papua has emerged as a land of opportunities with high returns on small investments and the opportunity for many types of employment, regardless of their credentials or skills.

Mimika province and its administrative centre Timika now has the highest HIV infection rate in Papua and Jimmy’s story is not an isolated case.

In Tanah Papua, HIV transmission is almost entirely through heterosexual sex and indigenous Papuans are significantly more likely to be HIV positive than non-Papuans.

Official data of Mimika province shows that 78 per cent of new infections in 2012 were among indigenous Papuans, 98.7 per cent through sexual relations.

Freeport McMoran states on their website that they provided HIV/AIDS education, training and promotion activities for 25,000 people in 2012, and they provide health care and Voluntary Counselling and Testing (VCT) services free of charge for indigenous Papuans from nearby tribes.

Arguably, however, this merely treats the symptoms rather than the root causes of the problem. Disorientation in the face of rapid changes, the social breakdown caused by displacement, violence from police and army and general poverty are visible in all urban centres, leading to an increased risk behaviour.

Although the HIV epidemic may have started within the sex industry, in Papua it has left the confines of high-risk groups and has now spread to the general population.

When men like Jimmy go home to their villages they take the virus with them, with the result that even in very remote areas, women who have never left the confines of their village have tested positive. Arguably, Indonesians from other islands who come to work in Timika are also at a higher risk of getting infected than in other parts of Indonesia.

The Indonesian security forces are known to control the formal sex business, where Indonesian women from outside Papua, usually Java, command high prices for their services.

Access for health workers to these semi-official brothels and massage parlours, which are mainly frequented by Indonesian migrants, is relatively easy.

HIV awareness and condom use among these commercial sex workers, almost exclusively non-Papuans, are relatively high (85 per cent).

However, the mainly indigenous Papuan women engaging in casual sex on the streets, often under the influence of alcohol, are difficult to localise and reach.

The men and women in Jimmy’s makeshift camp were never reached by any awareness raising campaigns, and Jimmy confirms that no condoms were used in the camp.

The rising need for money in a traditionally moneyless society draws many of the indigenous, especially young people like Jimmy, to urban centres, away from the poles of local traditional authority.

Increased mobility offers the opportunity for a larger number of sexual partners, far from the prying eyes of family and community.

In Timika, as in the rest of Papua, most HIV outreach programs are still focused on the officially registered commercial sex workers (who are all Indonesians from other islands), following the Indonesian national HIV program.

Tailored for the Indonesian context, these programs do not take into account the huge differences in the Papuan context.

Indeed, even within these essential programs, discrimination is at play.

* Part two of this three-part series is published here. The third and final part of the series will be published on July 1, and will look at the education and health system in Papua and some solutions to the growing epidemic.