Earlier this month, the Lowy Institute released its 10th annual poll. Each year, the poll surveys a representative cross-section of Australians and dissects our views on a range of important domestic and foreign policy issues. But unlike previous years, the 2014 poll has been met with less than the usual fanfare.

In fact, it’s almost slipped under the media’s radar. A reason for this, according to Antony Loewenstein, may be that there are “no surprises” in the poll. It continues to ask “mostly safe and predictable questions” and, as a result, generates largely unimaginative answers in response.

Not even the one aspect of the poll that’s caused most public disquiet in years past – Australian views on democracy – received much media or policy attention. Scoring only a passing mention in the Shanghai Daily and a Sydney Morning Herald opinion piece criticising Joe Hockey’s position on a classless Australia, few seem to have paid attention to the startling revelation that a sizeable minority of Australians remain sceptical about democracy.

According to the spread generated by this year’s poll, only 60 per cent of the Australians Lowy surveyed believed that “Democracy is preferable to any other kind of government”. By contrast, 24 per cent of Australians held the opinion that “In some circumstances, a non-democratic government can be preferable.” Another 13 per cent felt that “For someone like me, it doesn’t matter what kind of government we have” and the remaining 3 per cent of respondents claimed not to know what their answer would be.

Things only get worse for democracy when attention is turned to the responses of Gen Y. As with previous years, less than half of 18 to 29-year-olds felt democracy to be the most preferable kind of government. A third, on the other hand, believed that there could be times when a non-democratic government should be preferred to a democratic one.

For findings this shocking, it’s odd that they’ve received so little attention in 2014.

Perhaps, to borrow Loewenstein’s point, this can be explained by the fact that news of these findings are no longer new.

Alex Oliver, the Poll’s Director, revealed as much when she said that: “For the third year in a row, our Poll results have revealed a high number of Australians who are ambivalent about the value of democracy, despite Australia being one of the oldest continuous democracies in the world.”

Three years ago, when the Lowy Institute first released its findings on Australian attitudes toward democracy, media and policy commentators were quick to react.

For instance, former Lowy Executive Director Michael Wesley was taken aback by “how lightly we take our democracy” in Australia.

Chris Berg thought the findings were a clear indication that we’d transitioned into “a profoundly undemocratic age”.

As for Benjamin Herscovitch, his opinion was that results of this tenor “should cause alarm” and “prompt soul-searching” in a country that’s traditionally placed democracy alongside other uniquely Australian values like mateship, egalitarianism and a fair go.

Tim Soutphommasane even went so far as to ask the question: “Can a democracy sustain itself when almost half its citizens are prepared to entertain another mode of government? When they can’t seem to appreciate the self-evident virtue of democracy compared with authoritarian tyranny?”

Of course, as we’ve noted in our research on this topic, there’s a lot that’s wrong both with the polls and how they’ve been analysed in media and policy circles.

It’s fair to say that any such analyses of the 2014 poll findings would likely be problematic for similar reasons.

Yet it seems even more problematic to not publicly discuss these findings at all. Whether it’s considered old news or not, it is still important news that’s worth discussing.

In this regard, it’s the lack of a concerted media and policy response to the poll findings that has been most staggering this year.

During a time when political decisions are being made that’s threatening to impact Australians decades into the future, the topic of democracy should be on everyone’s lips.

Of course, that these decisions are being made by a government that has shown almost no regard for what the Australian people actually think or want may explain why so many Australians consider that democracy is no longer working for them. 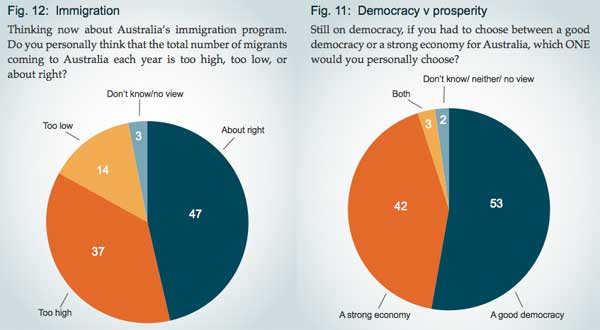 This year more than any in the recent past, the nation needs to be talking about democracy. This needs to be a national conversation, including a discussion about the need for a more sophisticated civics education for today’s youth.

Questions need to be asked – of our elected representatives but also of ourselves.

What do we mean when we say that “a non-democratic government can be preferable”?

Do we understand what democracy is and why it’s important?

Is our distaste for democracy merely a reflection of what the current Abbott government is doing?

Are the popular demonstrations and protests we’ve seen this year an indication that our disdain for formal, electoral democracy is already being replaced with a post-representative politics of participation?

For all its flaws, the Lowy poll is right to monitor democracy’s pulse from year to year. As citizens, the beating heart of democracy is something with which we should all concern ourselves.