The town of Bendigo is one of the last places anyone from the outside would have thought would become the latest frontline for hate fuelled rhetoric and divisiveness.

Yet for all its beauty, Bendigo faces a variety of social problems including poverty.

One quarter of Bendigo residents live in the low income bracket and issues including youth drug use and crime (10 times higher than the state average) are ongoing concerns.

Multiculturalism in Bendigo is increasing significantly, with the Census revealing growth in people speaking languages other than English at home (ranging from Hindi to Chinese languages and Arabic).

While multicultural communities remain (compared to Melbourne) tiny, they are likely to be significantly more visible – consider that the number of Hindi speakers alone in Bendigo has increased by 240 per cent over five years between 2006 to 2011.

This growth has contributed to local leaders organising the 2013 Bendigo Festival of Cultures as one mechanism to promote the benefits of diversity.

It may be considered somewhat predictable then that the move to develop a Mosque would cause some local controversies; both for the scale of the development (a $3 million building funded by the Sydney-based Australian Islamic Mission) in an area facing significant social challenges; and the introduction, for the first time, of a minaret into the local landscape.

This is not unique to previously monocultural societies. A referendum orchestrated by the political right in Switzerland saw minarets banned on Mosques in 2009.

Many mosques in Melbourne and around the world do not feature minarets. This particular mosque will not utilise a ‘call to prayer’. 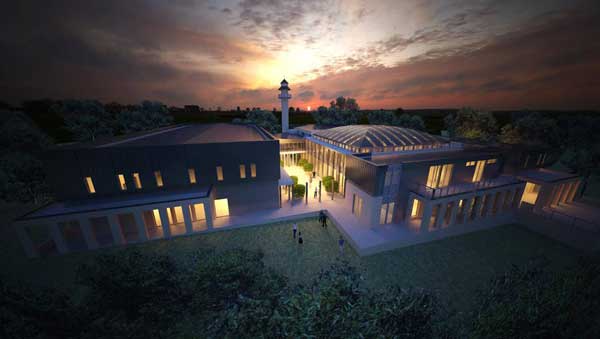 Some locals have also raised concerns about amenity in the local area (despite it being located in an industrial area) and utilised their rights to make objections to the council.

These are and always were issues for the locals of Bendigo to sort out for themselves through negotiation.

However, it has become very clear in recent days that what should have been a local debate, resolved by locals, has become hijacked by extremists intent on turning this into a larger ‘Islam verses the West’ narrative.

This is evidenced by worldwide hate sites such as Bare Naked Islam that have sent their ‘sympathies’ to Bendigo and published the Mayor’s email address online.

On the one hand we have the ‘mosque-chasers’ – groups of right wing ideologues such as the Q Society, Australian Defence League and Rise Up Australia who wrap themselves in the Australian flag (literally) and descend upon local communities to sow discontent at multiculturalism and hatred for Muslims.

Many new mosques are in working class suburbs and areas of the city where people struggle to get by on a daily basis.

These groups, seeking to manipulate these struggles, move into the area, flooding local newspapers, websites and establishing a physical presence.

They claim Islam is taking over the west ‘by stealth’ and that any proposed mosque will harbour jihadist terrorist’s intent on attacking local communities.

These groups envisage themselves as the vanguard of western values and attempt to get locals to fight with them. They have tried (and failed) in Noble Park and Coolaroo in the last year alone.

On the other hand we have extremist Muslims who feed off the hate-filled narratives of the extreme right to justify their existence.

They claim that Muslims are under attack and point to groups such as the Australian Defence League to justify their claims. These groups remain as marginalised within Muslim communities as Danny Nalliah’s Rise Up Australia party is amongst wider Australia (receiving 0.4 per cent of the vote nationally at the 2013 election).

• The proposed Mosque in Bendigo will lead to terrorist attacks in the main street of Bendigo.
• The streets of Bendigo will be flooded by Muslims during the call to prayer at the Mosque.

What side is making what claim? While both are equally preposterous, the first claim was made by unidentified members of the group protesting against the mosque, while the second was made by Zaky Mallah, an extremist known for making outlandish statements in the pursuit of publicity.

Mallah apparently sees no contradiction between his professed piety and stating ‘and you extremist thugs ain’t gonna do shit about it’.

The statements of both sides, both extremes, are equally ridiculous.

What is important is that the wider community instinctively know this, refusing to become involved, and that leaders from both sides of politics have displayed leadership in condemning the ignorance underpinning the debate.

The local council and Mayor have displayed both courage and leadership in standing up to a highly organised and vocal minority. Similarly the Bendigo Bank shut down a fundraising account associated with the anti-Mosque coalition.

In powerful contrast to this polarised debate, let us consider the statement made by Heri Febriyanto, a spokesperson for the local Muslim community who respected the right of others to object to the mosque.

“We are very humble. We are happy to listen and we want to live in harmony in Bendigo… We are just all the same. We just need a place of worship for us,” he said.

The bipartisan political leadership shown at the local and state level with respect to the Bendigo Mosque has been admirable. Leaders have seen through the attempt by extremists on both sides to polarise the debate.

However extremist groups, including the ‘mosque-chasers’ are likely to be emboldened by any watering down of the racial discrimination laws being sought by the coalition Government in the future.

Indeed this may be a small taste of things to come.

It is vital that such leadership and support for multiculturalism is maintained in the inevitable controversy over the next Mosque.