There has been an outpouring of sympathetic media coverage of the 20 people convicted in Egypt, including Australian journalist Peter Greste.

Nine of those convicted work for al Jazeera.

Foreign Minister Julie Bishop announced that she was ‘shocked’ by the verdict, and Tony Abbott has also denounced it, and appealed to Egypt on Greste’s behalf.

In a blog I published Tuesday, I argued that the conviction of the journalists should be put in context of “Western-backed repression and the outright slaughter of peaceful dissenters in the aftermath of the military coup against the Muslim Brotherhood” last year.

In fact, I considerably understated the facts: whilst the Australian government has supported ending the imprisonment of Greste, it has also supported mass murder, torture and imprisonment in Egypt.

On March 29, Tony Abbott was asked about the Greste case. He said he’d had a “cordial” conversation with Egyptian President Adly Mansour.

Whilst Abbott said that Greste hadn’t taken sides on the Muslim Brotherhood issue, and was simply reporting the facts, Abbott also commented on the political situation in Egypt.

I absolutely accept that the Egyptian justice system has to be allowed to run its course, but the point I made was that – well there were really two points I made: first of all, as far as the Australian Government is concerned the Muslim Brotherhood is, if not exactly a terrorist organisation, it certainly has at times been a friend of terrorist organisations and for that reason I have a lot of sympathy with the Egyptian Government. I made that point to President Mansour.

As the months passed by, Tony Abbott grew no more enlightened on the subject. On June 23, he revealed that he had also spoken to Egypt’s new military dictator, President Sisi on the weekend. Abbott explained:

Abbott commented further: “I think that the new President of Egypt will do whatever he reasonably can to ensure that we have peace and security in Egypt and more broadly in the Middle East. He is obviously concerned about the militant and radical tendencies….”

Abbott then gave a character reference to Sisi, claiming “This is, sure, a General but a General who has studied in both the United States and the United Kingdom so he is certainly someone who is familiar with the rule of law and the ordinary norms of justice.”

On June 24, Abbott was interviewed about Egypt again. Abbott defended Greste, by saying that he was simply reporting on the Muslim Brotherhood, not supporting it. And then, he went further:

I think it is also important, Richo, to make it very clear that the Australian Government respects the legitimacy of the new government in Egypt. We respect the legitimacy of their judicial process. We understand their concerns about extremism including the Muslim Brotherhood but we are dismayed by this decision.

He then provided another character reference for Sisi, explaining, “I did form the impression from my discussions with President al-Sisi on the weekend that this is someone that you can have a reasonable discussion with, this is someone who does get it when it comes to the ordinary norms of justice and decency.”

And Abbott again defended Greste by commenting that “they were simply reporting, not supporting an extremist group”.

By extremist group, Abbott was presumably referring to the Muslim Brotherhood, whose candidates won numerous elections in Egypt, in the brief interim between the dictatorships of Hosni Mubarak and now Abdel Fatah el-Sisi.

And he reaffirmed this shortly after:

As I said, I respect the legitimacy of the newly elected government in Egypt. We want Egypt to be a full member of the family of nations. We appreciate that the new government wants to quickly as possible normalise things in Egypt while maintaining internal security against jihadist elements.

So, let’s put all this in context.

Since the military coup last year against the Muslim Brotherhood’s democratically elected President Morsi, Egypt has become one of the deadliest countries in the world for journalists, along with Iraq and Syria.

Six journalists were killed in 2013, and over 65 journalists have been detained in Egypt since the coup, according to the Committee to Protect Journalists.

This includes Alaa Abd el-Fattah, who has over 600,000 followers on Twitter.

Esam Al-Amin has reported on the judicial process, whose legitimacy Abbott has so happily endorsed.

In two court sessions, lasting for a total of 100 minutes, 529 defendants were sentenced to death, without being allowed to call a single witness in their defence.

The judiciary was so execution-happy, it sentenced to death at least three people who had already been dead for over half a year.

As for the alleged extremism of President Morsi, that is a matter of opinion.

What is a matter of fact is that he was elected by Egyptians as President.

As Al-Amin noted, “The people in Egypt went to the polls at least six times: to vote for a referendum to chart the political way forward (March 2011), to vote for the lower and upper house of parliament (November 2011-January 2012), to elect a civilian president over two rounds (May-June 2012), and to ratify the new constitution (December 2012). Each time the electorate voted for the choice of the Islamist parties.”

Many people do not like Tony Abbott. Those who believe in democracy can think of various democratic methods to fight his government.

These methods do not include conspiring with the military to cancel elections, imprisoning Abbott and his cabinet, and slaughtering and imprisoning devotees of the Liberal Party. 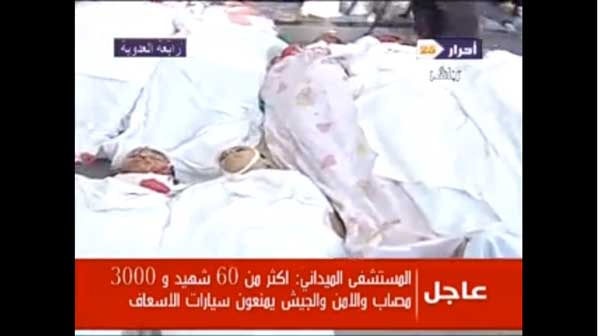 Amnesty International has been harshly critical of the numerous human rights violations that have occurred during Sisi’s reign.

It released a useful summary of its January 2014 report on repression in Egypt.

It observed that “The Egyptian authorities are using all branches of the state to trample on human rights and quash dissent, armed with repressive legislation and aided by unaccountable security forces, as well as a judicial system that punishes government critics while allowing human rights violators to walk free.”

On the issue of freedom of speech, Amnesty observed:

Thousands of Morsi supporters have been rounded-up by the security forces and face accusations of a string of identical offences, such as belonging to a banned terrorist group or protesting violently, without regard for their individual criminal responsibility.

In many cases, the authorities have detained Mohamed Morsi’s supporters without their basic due process rights such as access to lawyers, families and the means to challenge the lawfulness of their detention.

Amnesty International is concerned that among the thousands arrested are men, women and children who were merely exercising their right to freedom of expression and assembly by protesting in support of ousted president Mohamed Morsi.

On freedom of association, Amnesty observed:

On 25 December 2013, the authorities stated that they had designated the Muslim Brotherhood itself as a “terrorist” organization, following a deadly bombing attack in Mansoura for which armed group Ansar Bait al-Maqdis later took responsibility. Amnesty International fears that the authorities’ decision is politically motivated, and will sanction a further clampdown on the Muslim Brotherhood. The authorities have failed to present any evidence linking the movement to any of the terrorist attacks that have taken place since 3 July 2013.

The authorities have extended their crackdown on the Muslim Brotherhood to the movement’s charities and affiliated NGOs, ordering the Central Bank of Egypt to freeze the bank accounts of over  1,000 charities.

The crackdown on critical voices has also extended to human rights organizations. In December 2013, security forces raided the office of the Egyptian Centre for Social and Economic Rights, and arrested and beat a number of staff and volunteers.

The report notes that whilst the government has investigated human rights violations by Morsi’s supporters, it has ignored those committed by the government’s security forces.

Egyptian security forces have routinely used excessive and unnecessary lethal force to disperse demonstrations, a practice that has resulted in the deaths of hundreds of protesters and bystanders, as well as in some cases journalists and other media workers.

Since 30 June 2013, an estimated 1,400 people have died in protests or other political violence, including in incidents where the security forces used excessive lethal force to disperse demonstrations, as well as clashes between Mohamed Morsi’s supporters and opponents.

Courts have acquitted dozens of security forces, whilst the condemnations by some states of atrocities in Egypt have ‘rung hollow’.

States have brought little collective pressure to bear on Egypt in forums such as the United Nations Human Rights Council… Some states, including the US, seem to be preparing to resume transfers of weapons and equipment that could be used by the security forces to commit human rights violations.

Indeed, the US has just released another $575 million in military aid to Egypt. A revealing lesson about how the US feels about the appalling repression in Egypt.

In its full report on that very topic, Amnesty commented that after the military coup against President Morsi,

Morsi supporters continued to protest, while security forces used excessive and unwarranted lethal force.  In July 2013, in Cairo alone, over 50 protesters were killed by security forces in front of the Republican Guard Club, where Mohamed Morsi was believed to be held, and a further 80 people died in protests on Al-Nasr Road.

Eventually, in state violence unseen even during the first 18 days of the “25 January Revolution”, Morsi supporters were violently driven out of their sit-ins on 14 August 2013, leaving hundreds dead in unprecedented and unwarranted levels of lethal force used by the security forces to clear the public space of pro-Morsi protesters.

Morsi supporters were dealt another heavy blow two days later, when reckless fire by security forces led to the deaths of a further 97 people in the vicinity of Ramsis Square.

The largest subsequent pro-Morsi protest on 6 October 2013 was also dispersed with excessive and lethal force by the security forces, leaving at least 49 people dead.

Despite the crackdown, Mohamed Morsi’s supporters continue to stage regular protests, particularly on Fridays, as well as at universities, albeit on a smaller scale.

The report goes on to note that in the August 14 massacre, the Prime Minister admitted that close to a thousand people died.

At Rabaa al-Adiwaya, 550 protesters were killed, according to the forensic pathology department, and Amnesty notes that “Activists estimate the casualty numbers among protesters to be higher”.

Indeed, the number of dead might number in the thousands, though at this point, we may never know.

Think of all the dead, all the suffering, the thousands tortured and imprisoned in Egypt.

And then remember Tony Abbott’s words: that he “congratulated” Sisi “on the work that the new Government of Egypt had done to crack down on the Muslim Brotherhood”.