Over the last month or so Fuleco, cartoon armadillo and the official World Cup Mascot, has been getting a lot of press. Conservation-minded people across the world are up in arms about the apparent lack of action to protect the vulnerable three-barred armadillo (Tolypeutes tricinctus), and its home, north-eastern Brazil’s caatinga forests, and claim that the World Cup would provide a good opportunity to remedy this.

The furore was sparked by a paper written by a group of Brazilian scientists, and their associated media campaign, which called for better protection for the armadillos, and for the dry tropical forest ecosystems it calls home.

According to FIFA, Fuleco “can play a key role in driving environmental awareness” and the chosen name “seamlessly represents the way in which the FIFA World Cup can combine the two (football and ecology) to encourage people to behave in an environmentally-friendly way”. But is it really fair to ask this small, football-shaped mammal to shoulder the burden of saving an entire ecosystem?

None of the other World Cup Mascots have carried responsibilities of this heft. Let’s take a moment to look at the previous mascots, and their contributions to the world outside of soccer.

World Cup Willie, the English lion, was the first of the FIFA mascots, charming children and merchandising companies alike in 1966. He wore a Union Jack jersey, and doubtless enjoyed lashings of tea and scones. 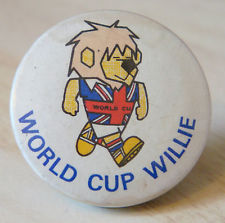 The rise of feminism in the 70s passed the World Cup completely by, as a string of boys in team uniforms represented FIFA at cartoon level — Juanito (Mexico, 1970), Tip and Tap (Germany, 1974) and Gauchito (Argentina, 1978). Killjoys may point out that women don’t play in the men’s World Cup. Well, neither do oranges, yet one of their kind, Naranjito (“little orange”), somehow squeezed into the team’s kit to represent Spain in 1982. 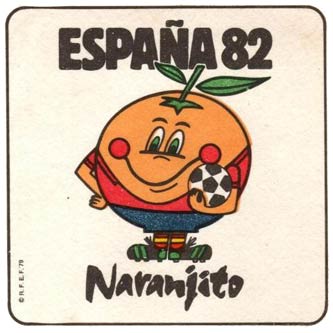 Not to be outdone in the culinary stakes, Mexico’s rolled out Pique, their second mascot, in 1986.  This spritely Jalapeño pepper also wore a sombrero, but unlike Juanito, was able to grow a convincing moustache.

Italy broke with anthropomorphic tradition in 1990, by introducing Ciao, a red, white and green stick figure with a soccer ball for a head, as their football emblem. While little is known of the rationale behind choosing the mascot equivalent of a sporting candy cane, no one could ever accuse Ciao of having a hair out of place.

Things got back to anthropo-normal for a bit in 1994, with the USA’s democratically elected Stryker, the World Cup Pup, closely followed by France’s Footix the rooster in 1998. Getting in early with the first known mascot portmanteau, the sporty cock’s name was a homage to both the beautiful game, and to Asterix comics.

Mascots got a little weird when football visited the home of anime. In 2002, Japan and South Korea shared the World Cup, and brought us a triumvirate of “spheriks”, in the form of Ato, Kaz and Nik. No one outside of South East Asia was really sure what they were, or why proponents of a game called “Atmoball” were allowed to represent World Cup football, but they did do a massive line in plastic figurines — perhaps unsurprisingly, as their names were chosen via polls conducted on the internet and in Macca’s outlets in the World Cup host countries. In 2006, Germany also went with the multiple mascot option, opting for Goleo VI the Lion, and his sidekick, Pille, the soccer ball that just wouldn’t shut up no matter how often you kicked it. Goleo courted controversy in Germany, with commentators accusing him of being an enemy spy for England or the Netherlands (who both use the lion in their emblems). Germans suggested that the German eagle, or even a squirrel, as a symbol of “the nation of frugality” would have perhaps have been a better option. Proving them right, Goleo went on to ruin the Bavarian toy company who won the rights to create stuffed toys in his likeness, and even stooped so low as to perform a track with Atomic Kitten. Possibly most controversial of all, however, was his refusal to wear pants, although, in a nation where nude sun baking in public parks is perfectly acceptable, people of this opinion were perhaps just a vocal minority.

Our penultimate World Cup mascot, Zakumi the green-maned leopard, represented for South Africa in 2010, with the message “Zakumi’s game is Fair Play”. As such, he appears to have been the first mascot whose duties extended beyond corporate promotions, and consequently, the first mascot to really give his media PR mop-up squad a really good work out. After South African outrage that thousands of local jobs producing Zakumi merchandise had been lost by outworking production to China, there was then the small matter of workers’ rights abuses in the overseas sweatshops, which emerged later in the production cycle. Oh well. At least he wore pants.

Which brings us to Fuleco, Brazil’s mascot of the moment. Modelled on the threatened and undeniably adorable three-banded armadillos of Brazil’s caatinga ecosystem, Fuleco’s name is a portmanteau of Fut from the Portugese “Futebol” (football), and eco from “Ecologia” (Ecology). Despite his apparent environmental credentials, Fuleco is, perhaps conveniently, mute on environmental matters, and anything else you may wish to ask him about.

Fuleco has been denied a voice, and none of the other mascots seem to have managed to pull their anthropomorphic digits out to help the environment or society. Their greatest collective contribution to the world outside of soccer appears to be reinforcing the patriarchy, infringing upon workers’ rights and contributing armies of their tiny, plastic facsimiles to the Great Pacific Garbage Patch.

So, I say give Fuleco a break. Take it to his boss. Lay off the armadillo, and ask FIFA to put their money where their mascot is.