We were reminded of him this week, when he told the Federal Court he would no longer be proceeding with his sexual harassment suit against Peter Slipper.
The fresh-faced young political staffer was once the centre of a major media storm, after leveling sexual harassment allegations at the then Speaker of the House of Representatives, Peter Slipper.

At the time, it was the biggest show in town. Slipper, a strange and complex man, had been elevated to the office by the Labor government of Julia Gillard. Lacking a majority in the House of Representatives and desperate to hang on to power, Labor engineered a deal to get Slipper to turn the tables on his Coalition colleagues.

Slipper, who’d been dis-endorsed by the Coalition in his own seat, turned out to be amenable to the deal. The end result gave Labor an extra vote on the floor of the House, and earned Slipper the undying enmity of the Queensland Liberal-National Party. The Daily Telegraph notoriously drew him as a giant rat on the front page.

In Slipper’s office worked a young man named James Ashby. Ashby, outwardly the model of a loyal staffer, was in truth a troubled soul who’d come to politics after stints in FM radio and the backwaters of the Queensland LNP. Working for a backbencher whose career had manifestly stalled, in most circumstances Ashby would have excited little more than passing gossip in the ordinary run of Canberra politics.

But if Slipper’s career was going backwards, there was another, more powerful figure in Queensland whose ambition remained undimmed. Mal Brough had been a cabinet minister in the Howard government before losing his seat in the 2007 election.

His unhappy legacy includes the Northern Territory Intervention and all that has since ensued.

It seems as though Brough didn’t like the irrelevance that loomed, post-politics.

After an unhappy stint fighting factional wars in the lead-up to the Liberal-National merger, he decided he wanted back in.

With the assistance of LNP heavyweight Mark McArdle, Brough engineered a deal that easily secured him pre-selection victory for the Sunshine Coast seat of Fisher. The seat of Fisher was held by long-time LNP backbencher, Peter Slipper.

We’ll never know precisely when James Ashby and another of Peter Slipper’s staffers, Karen Doane, stopped working for Slipper, and started working for Brough. But double agents they were.

The incontrovertible trail of meetings, emails and phone calls establishes quite clearly that by early 2012, Ashby, Doane and Brough were working together to undermine Slipper as the Speaker.

The eventual shape of the plot proved all too simple: an old-fashioned sex scandal.

Ashby went to the Federal Court alleging that he had been sexually harassed by Slipper. To the prurient stain of sexual harassment was thus added a zesty twist of gay innuendo, which the Murdoch newspapers were only too happy to pick up on.

Indeed, the Murdoch newspapers were in on the sting from the start. The other key player in this sordid little tale was none other than Steve Lewis, high profile political correspondent for the Sydney Daily Telegraph, which, as we’ve seen, had already formed a firm view of the character of the new Speaker.

The political blowback was immediate and, as it turned out, devastating.

In the febrile atmosphere of the later Gillard government, the scent of scandal surrounding Slipper proved impossible to rise above.

Slipper was also being pursued by the Coalition over allegations of rorting cab vouchers, and would eventually face criminal charges; in the interim, he was soon in a politically untenable situation.

Unable to recover from the stain on his reputation, Slipper was forced to resign. 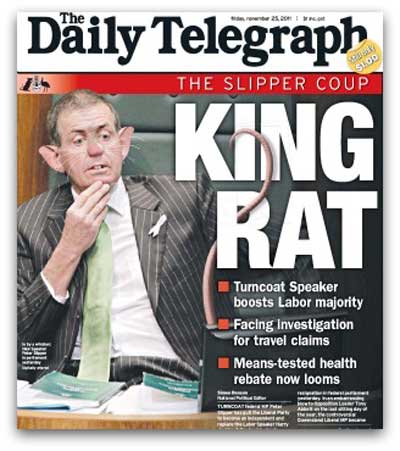 In the meantime, the parliamentary manoeuvres to remove Slipper gave Julia Gillard an unexpected opportunity to create her lasting political legacy: an incendiary speech about misogyny that quickly made her famous around the world.

In one of the more hypocritical moments of Tony Abbott’s career, he attempted to justify the removal of Slipper as Speaker by reference to supposedly sexist comments Slipper had made in various emails that had come to light as a result of the Ashby law suit.

When Gillard and Labor defended Slipper, Abbott and the Coalition accused her of hypocrisy.

This was the source of Gillard’s rage about being “lectured on sexism and misogyny by this man.”

One of the worst moments in Australian parliamentary democracy thus unexpectedly produced one of the best. It was a perfect encapsulation of the Gillard years, in which high principle emerged occasionally in an all-pervading atmosphere of base hypocrisy and low treachery.

Such was the explosion created by Gillard’s misogyny speech, most people entirely forgot about Peter Slipper, and have little cause to remember him since.

He is nowadays pursued mainly by his committed enemies in the Queensland LNP; the former speaker is said to be suffering mental health issues, which cannot have been alleviated by the various court cases still continuing. For instance, an action by Karen Doane is still going ahead.

So there will be few in the media now prepared to say that Slipper has been vindicated in the James Ashby allegations, even though that is what the end of Ashby’s suit now means.

There will be many in the government quite relieved. After the devastating initial judgment by Steven Rares – the one that found that Ahsby had acted “in combination” with Brough to bring Slipper down – was appealed, many had hoped that a proper hearing would bring key players to the witness stand, including Ashby, Doane and, of course, Brough.

In his media statement, [insert link: http://sc.independentaustralia.net/PeterSlipperStatement.pdf ], Ashby spoke of his concern for Slipper’s mental health and his inability to pursue the case against a well-funded defence (Slipper’s costs are being covered by the federal government).

In reality, of course, the case was dropped because Ashby had every chance of losing. Proving that Slipper’s advances really happened, and that they were non-consensual, was always going to be difficult.

Explaining away the damning evidence of a conspiracy to tear down a political opponent – well, that would have proved impossible, not to mention embarrassing for all concerned.

After all, as David Marr pointed out this week, what was the point of fighting on?

“Ashby’s allegations had ruined Slipper at a stroke. A great torpedo had been shot into the listing hulk of the Labor government. Brough had beaten off his party rivals to secure the seat of Fisher.”

And, indeed, the real winner of ‘Ashbygate’ is only too easy to identify.

Mal Brough won the seat of Fisher in 2013, and can be expected to hold the reasonably safe seat for many years to come.

Today, he is a backbencher in Tony Abbott’s government, a powerful factional operator with every chance of returning to the ministry one day.

By contrast, the names ‘Slipper’ and ‘Ashby’ will soon disappear into comparative obscurity.