How did a Sydneysider become the symbol of a social movement in the land of Gallipoli?

The protests, started in May last year by a handful of environmentalists opposing the government’s plans to demolish the last green space in a popular suburb of Istanbul in order to construct a shopping mall, became a nationwide movement almost overnight with the aid of social media.

A small flame of dissent, seemingly destined to die out, became a roaring fire of protest owing to two factors – the aggressiveness of the response by the local police force, and the arrogant attitude of the Turkish government.

Some 2.5 million people from 79 different cities attended the protests, in which nearly 8,000 were wounded and 6 people died.

As the protests grew, the journalists and camera crews rolled in. As every big movement attracts its own symbols, so the Gezi Park protests were no different. First came ‘the girl in a red dress’; then, ‘the girl in a black dress’.

The photo of 23-year-old university student Kate Cullen, arms open in front of a water cannon in a show of utter defiance, was too strong for editors around the world to ignore.

It became the cover of newspapers and magazines; stencils and illustrations of her spread rapidly.

The latter was not true, but the former was – she was an exchange student from Australia who was studying sociology in Turkey for a year.

With Turkey amongst one of the most racially-mixed countries in the world, nobody had considered that possibility when the photo had been taken.

Today, Cullen resides in a sharehouse with group of other students in Stanmore.

She is keen to emphasise she was an active and willing participant in the protests.

“I was completely outraged by the whole thing,” she said. “I have a friend that I lived with for about six months in Turkey.

“I knew she was camping there for three days in Gezi Park before the whole thing escalated, so I saw a little bit of that.”

“They were tear gassing [the crowds]every single day. Everybody knew about this police brutality and everybody knew it needed to stop.

“By that night, we were all so enraged. I got tear gassed three times and [as a result]we would split up with all our friends.

“It was just brutal, absolutely brutal, and media wasn’t reporting on any of it.”

Cullen’s reaction was that “something” needed to be done. 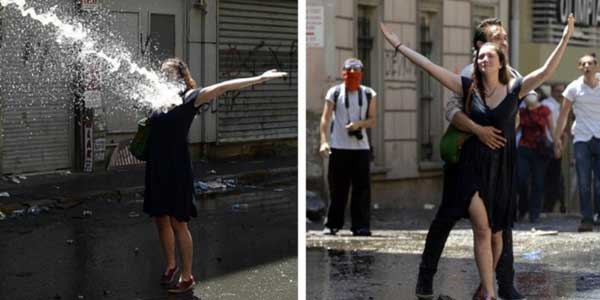 Although Cullen admits to fear in taking on the police in such an iconic way, the cause of that fear is somewhat unexpected.

“After I got hit by the water cannon [was]probably when I was most scared,” she said. “[Other photos show the police] mixing a chemical with water and getting sprayed directly onto me, and that burnt… like nothing else I have ever experienced, or probably ever will experience.

“I thought at that stage that I was going to be blinded… that’s how I imagined it would feel like to have acid thrown on your face.

“After that moment, I was thinking… 'I am gonna be blind for the rest of my life, I will have burns on my face’.”

Temporarily blinded, Cullen was rescued by an unknown passer-by.

“She pulled me out and took me into a little shop,” she said. “Two other guys, they gave me a concoction of stuff.

“Depending on the chemical, you’re supposed to treat it with a different substance. So I had a concoction of something…”

Surprisingly, Cullen’s fifteen minutes of fame haven’t substantially altered her life in Sydney, besides increased attention from the Turkish press.

“I have friends in Istanbul obviously, and they were sending me messages saying things like, “I saw your face today on some cups’, or on a magazine cover,” she said. “There was even this thing about doing a statue!”

But Cullen insists it’s not an event she wants to define her life.

“The more I look into it, the more I try to distance myself, Kate Cullen, from that person, from ‘woman in black’, because I prefer it to be [a]symbol I guess – not [for people to]get caught up in what I did. I feel like it makes it more powerful.”

But although Cullen’s image is now prominent on the back of that now-iconic photo at one protest, it is far from her first time protesting on the streets.

“I went to the Iraq war protest in Sydney when I was about eight, with my family and grandma,” she said.

“I have also been to [a]few refugee protests, for asylum seekers, because the treatment of asylum seekers is actually really awful.”

But she admits that none of the protests marches in Australia have matched “[the]scale of Istanbul.”

Nevertheless, in at least one sense, she draws parallels between the circumstances.

“It was really positive, thinking, ‘It is incredible’ – this is proof of people power over a government,” she said. “I felt more empowered and alive than I ever felt in my entire life.”

As for her family’s reaction, the initial response was somewhat underwhelming.

“I called my family during that night, because I assumed that would have been on TV all over the world cause. But they were like, 'What are you talking about?' They had not heard anything about it [because of the media blackout].”