If you’re in the crime-fighting business, then social media can be your best friend. Last month in Port Macquarie, for example, the alleged thief of a $40,000 ute found himself on the wrong side of the law after posting on Facebook about his new acquisition.

But social media can also be your enemy, something officers from Blacktown Police in Western Sydney are finding out the hard way.

This week, the Blacktown Local Area Command turned to their popular Facebook page to alert local residents to two crimes that occurred on Wednesday night.

And given that the community is called Blacktown… well, why not use stock images of black people committing crimes to give their social media campaign a little more oomph?

Officers reported that a Lalor Park male was stopped and searched by police, who uncovered a concealed knife. He was charged with custody of a knife in a public place. The picture used to illustrate the post was a stock image of a black hand holding a knife. 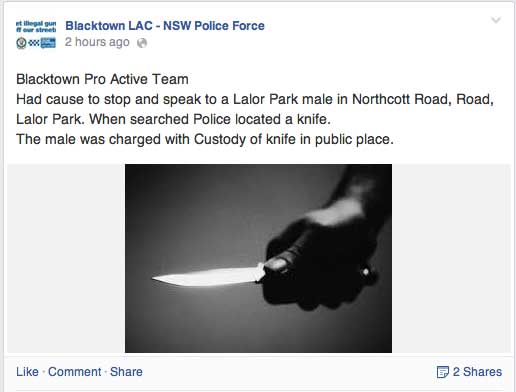 A posting immediately before it reported that police were seeking a man after the attempted abduction of a 16-year-old girl.

“Police are appealing for public assistance following the attempted abduction of a teenage girl near Penrith overnight. About 7pm (Tuesday 17 June 2014), a 16-year-old girl was walking along O’Connell Street in Kingswood after getting off a bus from Mount Druitt.

“A short distance from the bus stop, the girl was approached by a man in a vehicle. Investigators have been told the man spoke to her briefly, before grabbing her arm and attempting to pull her toward the vehicle. The girl hit the man across the face, before he returned to his vehicle and fled the area.

While no description of the offender was provided, presumably he’s black. Why? Because the stock image used to illustrate the story was a black man holding his hand over the mouth of a young white child. 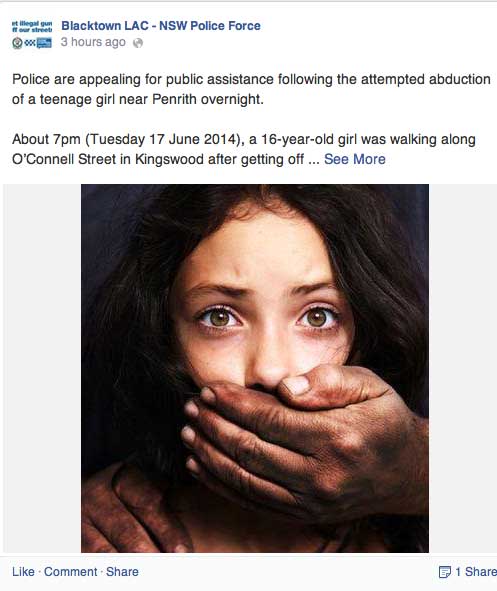 Shortly after New Matilda contacted the Police Media Unit for comment, the images were removed. So too were complaints about the use of the stock images from social media users.

A spokesperson from the NSW Police Media Unit told New Matilda the images were sourced externally and should not have been used. The spokesperson apologised, saying there was no intention to cause offence. However, Police Media remained silent on requests for details about the race of the alleged offenders.

Blacktown Police took one other post down from their site yesterday – a tip from a helpful local about professionalism in the Police Service.

“Just some friendly advice so you can warn some of our constables that their voices can be heard clearly in the waiting room. Hearing people that ring that station described as “just a bunch of f**kwits”… does not convey a professional image and gives an attitude that the public are to be held in contempt. Customer service should apply on both sides of the law.” 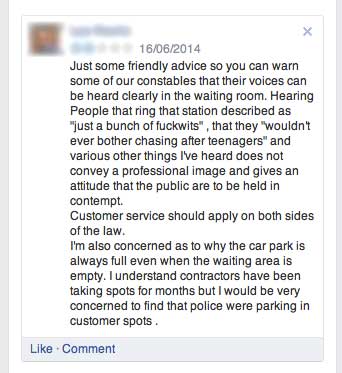 And it seems they’re getting the message: shortly after the stock images were removed, they were replaced with pictures from Refugee Week events in Blacktown, and a brochure promoting an upcoming NAIDOC Week BBQ with the Aboriginal community.

That said, they probably don’t quite offset the multiple posts referring to local police as “dogs” and “c*nts”, which are still visible on the Blacktown LAC’s page, under the subheading 'reviews'.

Ah, social media, where we would we be without you!

* Speaking of social media, New Matilda is an independent Australian news stie that relies almost entirely on subscriptions to survive. If you want to support our work, you can subscribe here. If cash is tight, then please consider tweeting this story, and sharing it on social media.