It’s a strange time to be a young voter.

For under-30s Joe Hockey’s first budget was doubly savage. If approved by the Senate it will dump thousands of people into serious poverty by eliminating safety nets, most cruelly exemplified by the new demand that all Australians under 30 serve six months unemployed before they become eligible to receive the dole.

A Senate Estimates Committee heard yesterday that this would mean 500,000 young people would be in need of emergency aid.

On the other hand, the budget also limited education pathways and opportunities, spiking university fees, increasing student debt, phasing out the Gonski funding model, and abolishing initiatives such as the “tools for trade” program.

But where there is crisis there is also political opportunity.

The Greens and Labor have moved in to try to connect with young voters abandoned by the Coalition, courting them at a time of genuine need.

In Labor’s case, some of the efforts to connect with this base have been less than inspiring, with party advertising attempting to weave online memes and a youthful tone in with serious political messaging. The above, apparently signed off by Perth MP Alannah MacTiernan, shows roughly the level of digital savvy you might expect from the man below. The Greens' latest effort is somewhat more interesting, though at times also a little cringeworthy.

Senator Lee Rhiannon’s office has produced an interactive ‘debt calculator’, which encourages students to input their details and discover the crushing debt they will accrue in a future where fees have been uncapped, and interest on debt increased.

By this morning, the Greens were claiming a million hits on the site in just a few days.

It’s a clever tactic: freaking out voters about something that won’t affect them for another 5 or 10 years is difficult to do, and the tool brings an immediacy and urgency to the reforms that, if passed this year, will be very hard to undo. One can only hope the next Greens endeavour will be something along the lines of www.How-Far-Will-My-House-Be-Under-Water-After-Climate-Change.com.

New Matilda will be running a proper fact-check on the debt calculator later next week but first we thought we’d give it a whirl for ourselves. As our in-house cadet/debt accruing student journalist, I’ve volunteered to be the guinea pig.

The calculator asks a series of questions as you scroll down including your age, where you live, the stage of study you're at, and what your current income is.

Along the way, the Greens have also programmed the calculator to provide exactly the down-to-earth, street talking responses that young people like me just can’t help but relate to. 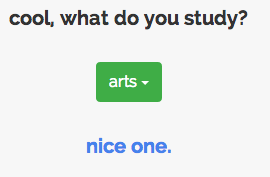 And in case you thought this was some kind of uncaring auto-programmed robot you were dealing with, they’ve also added in some feedback to help to stay cool and calm as you cruise through the questions. 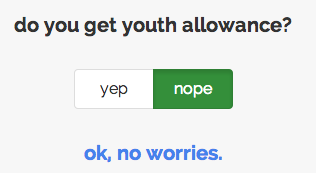 Having input the cost of my arts degree and factored in my wage, the calculator tells me two things; the first is that I’ll be $12,440 worse off if Christopher Pyne’s reforms get through, the second is that pursuing a career as a journalist was probably not a very good idea for my long-term financial future.

That’s an arts degree, a relatively cheap option. Things look substantially worse if you’re a medicine student yet to begin your studies. This is what someone starting after deregulation and reliant on youth allowance would end up with, according to the calculator: There remains great uncertainty in regards to the Coalition’s proposed changes to the tertiary sector. Palmer could fell them in the Senate but even if the nap-prone member for Fairfax lets them go under his watch, the impact on education costs and access are far from certain. The reforms are an experiment that could have a far less dramatic impact than the Greens 'calculator of doom' predicts, but which are likely to be just as bad.

There is one element to the changes, however, that so far has been little discussed. And it’s one that the calculator doesn’t have a button for.

If built correctly, the debt-doom counter would have a “clear all” option for those who are born into situations of privilege.

Looking back over my experiment shows why. In my case, the $20,000 dollar HELP loan I am currently accumulating for a postgraduate degree in journalism at the University of Technology Sydney will be paid off by my parents, who are in a position that allows them to assist me with health and education expenses.

This gives me a considerable advantage over a long period of time, and it’s not just because I’m freed up from the hefty debt. For those who are able to draw financial support from members of their family, the cost of a degree will not be a barrier to entrance as it will for those who cannot.

That’s one of the many reasons that the Coalition’s changes will, on the overwhelming balance of probability, hit the poorest students the hardest and deflate their prospects of social mobility.

Perhaps the biggest risk of deregulation is that ambitious young students who lack financial support will see the kinds of debt figures the calculator predicts and say ‘no thank you’ to tertiary study. That will cause great personal disadvantage as well as damage Australia’s overall economic potential.

While it’s amusing to watch the Greens and Labor try to connect with young voters through language and mediums that clearly leave older party hacks uncomfortable, it’s also encouraging that they’re using their resources to this end. The genius of Pyne’s changes is that those they put at risk are unlikely to feel any pain until it’s too late. Even if it comes from a number-crunching robot, young people are going to need to be armed with all the advice they can get.

Either that, or a dad with connections, and a secret $60,000 scholarship.