In 2002, I covered the April coup against the late President Hugo Chavez. The collusion between the economic elite, the political right, the commercial media and the US failed to overthrow Chavez's democratically elected government. Twelve years later, President Nicolás Maduro is facing the same menace.

The coup of 2002 came straight from the US low intensity warfare playbook — support for a militarised right wing, financial sanctions, destabilisation — specifically mentioned by the democratically elected socialist president of Chile, Salvador Allende, before he was deposed in 1973.

These days the same playbook has been dusted off and used by the most reactionary sectors of Venezuela’s opposition. The unfolding events began on 6 February when a group of 80 students from Táchira — a state bordering Colombia — protested against insecurity and inflation.

The rally ended badly when the students tried to burn the local government house. From then on, the students’ actions have become a seditious call to overthrow Maduro, who replaced Chavez after his death almost a year ago.

The government responded by sending a battalion of paratroopers to Táchira — "to enable the city to function, so food can get in, so people can go about their normal lives," according to Venezuela's interior minister. The opposition say the paratroopers are part of a political crackdown by the state. Either way, 13 have been killed.

That Venezuela has economic problems is undeniable. Neither Chavez nor Maduro have been unable to reduce the country's crime rate. Maduro was also wrong to revoke the accreditations of CNN reporters covering the country's crisis.

However, it is also true that the extreme right — the “blonde ones” as Chavez used to call the wealthy, white social elite — has never accepted political defeat at the ballot box. In the last 15 years, the Bolivarian socialist government has won 18 out of the 19 elections held in the country, from presidential to municipal polls.

It was only after the US recognised that the election of April was clean and transparent — it was monitored by the the Carter Center — that Capriles and the MUD backed off.

The most recent time Venezuelans went to the polls was on 8 December last year for the municipal elections. The opposition cast the election as a plebiscite on Maduro. They lost again, by a margin of one million votes. It was their fourth opposition defeat at the ballot box in recent months. The legislative elections at the end of 2015 would be their next legitimate try at power

MUD's defeat last December provoked a bloody civil war between the moderate and the extreme right of the party. The extreme right won. Capriles, seen as too soft, was ostracised and replaced by Leopoldo López, instigator of the latest street violence in Caracas. 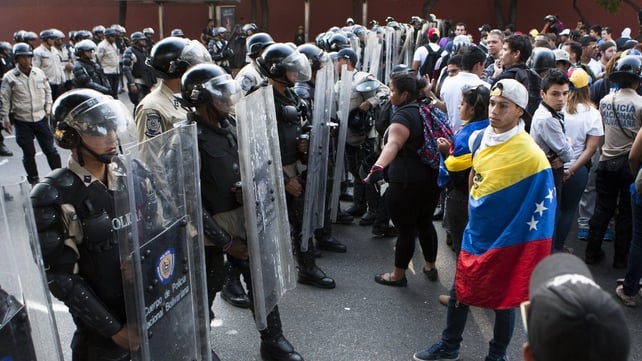 Lopez, a telegenic Harvard-educated economist perennially dressed from head to toe in gleaming white, was one of the ringleaders of the botched 2002 coup against Chavez.

The political defeat of the opposition last December gave Maduro further legitimacy and strengthened his determination to introduce further reform. His most daring is the “Fair Price Law", introduced on 11 January, that puts a 30 per cent profit ceiling on goods and services. The financial elite went into paroxysms when they saw their speculative 400 to 2000 per cent margins melts into air.

This has happened before — to Allende in Chile. “Make the economy scream," US President Richard Nixon’s told the CIA, "to prevent Allende from coming to power or to unseat him." It was a pre-coup strategy. El acaparamiento (hoarding) was one of the most effective tactics used by the financial elite to prepare for the Chilean coup of 1973. This is what has been happening in Venezuela since the Bolivarian government came to power.

Hoarding basic goods in Venezuela — such as toilet paper, coffee, rice and milk among others — creates both a false shortage, increasing hardship, and the appearance of chaos. Almost daily the authorities find new storehouses packed to the rafters with basic goods. Last February more than 900 tones of rice, sugar, oil, milk and coffee were discovered in a warehouse in the state of Táchira.

Nixon's interference in Chile is a reminder that Washington is never too far from attempts to destabilise radical democracies in the region.

When is it considered legitimate to try and overthrow a democratically elected government? Mark Weisbrot ponders in The Guardian. “In Washington, the answer has always been simple: when the US government says it is.”

In a speech before the US Foreign Affairs Committee of the House of Representatives in April last year the American Secretary of State, John Kerry, reminded the world that Latin America is the "backyard” of the US. The US has historically funded opposition groups in Venezuela, through the National Endowment for Democracy and USAID programs.

The uncritical and myopic international news media neglect to quote Maduro's supporters — as they neglect to mention that he was elected by the majority of Venezuelans.