“Interest rates will always be higher/lower under a Labor/Coalition government.”

“It will be a welcome relief for small businesspeople and house buyers/is yet another assault on Australian savers.”

Last week’s announcement by the Reserve Bank that it was cutting official interest rates to 2.50 per cent brought forth many combinations of the above statements. Those with political prejudices can find plenty of reinforcement for their viewpoints.

No one, however, should claim bragging rights over interest rates, for three reasons.

First, they are set by the Reserve Bank, not by executive government, one of the Howard government's  two significant economic reforms. The better-known was reform of indirect taxes; the other unsung reform was early in its term when it gave the Reserve Bank a large degree of independence, and set it a simple charter of keeping inflation within bounds.

Second, the forces which determine interest rates are largely beyond the control of national governments. A generation ago, when the Australian economy was more closed to the world, our governments could (and did) exert far more domestic control over exchange rates and interest rates. Australia’s financial markets are now much more globally linked.

That is not to say central banks ignore domestic developments. If a government pursues a profligate fiscal policy and runs a high deficit when it is not needed, the monetary response is generally a compensating hike in interest rates. And, as is common now in Europe and the USA, if an economy is stalled, the central bank will push interest rates all the way down to zero.

Although the Murdoch media and the Opposition would have us believe we face a crisis brought about by economic mismanagement, that is not the case. There is no need for drastic action, and that leads to the third point: real interest rates – the rates that influence our standard of living – have been reasonably stable since the Reserve Bank became independent.

This point needs a little more explanation, because politicians and journalists rarely mention the difference between real and nominal interest rates. The difference is important, however, not just from a public policy perspective, but also in terms of our personal financial management, as either borrowers or investors.

Through some simple examples we can understand the difference.

Imagine that you have $100,000 to invest, and that you have the good fortune to know of a reasonably secure investment paying five per cent a year.  In the first year you will earn $5000 in interest, but if inflation is 3 per cent you will have to re-invest $3000 of that to maintain the real value of your investment. You can draw off only $2000, or two per cent of your initial investment, without diminishing your capital.

That two per cent is called the “real” return – the return that determines what you can draw without running down your capital. The five per cent, which is the return advertised by financial institutions and reported by the press, is the “nominal” return.  The general relationship is:

For a borrower the situation is reversed. If you have a $100,000 mortgage, at 7 per cent a year, and inflation is 3 per cent, then you will pay $7000 interest, but, provided your income is rising at least in line with inflation (which is so for almost all employed Australians), the burden of that loan diminishes over time. Its real impact, after the borrower has enjoyed a three per cent wage rise, is equivalent to a rate of four per cent – again it’s the nominal rate minus inflation.

That happens to be around the real rate borrowers have been paying on home loans over the last 15 years, as illustrated in the graphs below – first the nominal home loan rate as reported by the Reserve Bank and second the real rate, with the inflationary effect removed. 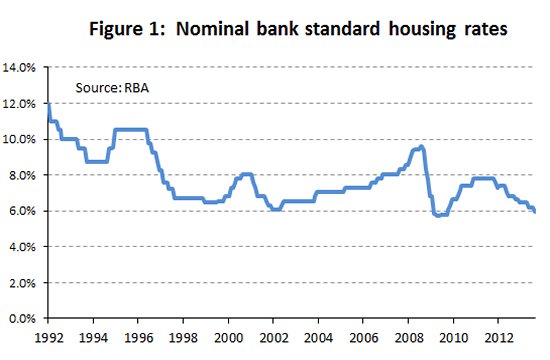 Apart from the drop at the time of the inflationary spike of the GST (largely a mathematical artefact) and the moves before and after the 2008 financial crisis (a boom followed by a crash), real rates have hovered around four percent. The economy is reasonably well-managed, and the Reserve Bank is doing its job.

A long-term trend in the economies of Australia and similar countries has been a steady fall in inflation over the last 40 years, but we have not necessarily changed our thinking to accommodate that change. Back when inflation was around ten per cent and mortgage rates were around fourteen per cent, the initial burden of mortgage repayment was tough, because then as now people tended to borrow for their houses as much as they thought they could repay, but as incomes rose in line with inflation that burden soon whittled away.  Many baby-boomers, in the days when fixed rates were standard, benefited very well (at the expense of lenders) from the huge inflationary bout of the 1970s.

Now that inflation is low, borrowers are no longer enjoying that easy diminution of the real burden of their home loans. This helps explain, perhaps, why, against the evidence, people report that they are suffering “cost-of-living” pressures, when what’s happening is that their mortgage burden is hanging around much longer.

Lenders, too, should be conscious of the distinction between real and nominal rates. The nominal rate is largely illusionary: it’s the real rate that counts, and that’s almost always much lower. And it gets worse: because taxation is levied on nominal interest, fixed interest investments often give a negative real return. Some partisan commentators have said that the recent cut, which will be passed on to depositors, will hurt investors, but any investor who has a large portion of his or her long-term portfolio in fixed interest should seek independent financial advice as soon as possible. There are much better investments available.

On Friday the Reserve Bank in its Statement on Monetary Policy, included the guarded words: “Nevertheless, at its recent meetings the Board had noted that the inflation outlook would afford some scope to ease policy further, if needed to support demand.”  That’s a pretty strong hint that there may be a further cut in interest rates in September, just before the election.

If so, then its proper coverage should be a small column in the business pages. If, however, Government or Opposition politicians try to make political points about it, then, to quote from the now Prime Minister, in a different context (and in summer), we should all take a “long, cold shower”.

But perhaps some will enjoy a little schadenfreude on seeing played back John Howard’s 2004 statement “interest rates always go up under Labor governments”. If there is a political message about interest rates it’s that politicians would do well to avoid categorical statements about what may happen on their opponents’ watch.