Towards the end Cormann said “Repeating a lie continuously doesn’t make it true”.

He’s right, but he could have completed the picture by saying “[but]if you tell a lie big enough and keep repeating it, people will eventually come to believe it” – a statement credited to propaganda minister Joseph Goebbels in Hitler’s Germany.

These lies have become so entrenched that even independent journalists don’t bother to question them. They must be true. Let’s look at the evidence.

First, to consider Commonwealth revenue (94 per cent of which is taxation), using the conventional measure as revenue as a percentage of GDP.  A simple graph blows away the lie. If any government were to be described as “big taxing”, it would be the Howard government, but it is more reasonable to say that it enjoyed the benefits of high revenue from company tax, capital gains tax and GST as it rode the fortunes of a mining boom and strongly growing consumption (which turned out to be unsustainable because people were borrowing against nominal rises in house prices). The main development has been a dramatic drop in revenue on the Labor Government’s watch, in the wake of the GFC and after the peak of the commodity boom.

Then to look at expenditure.  There is a little more support for the claim that Labor has spent more than the Coalition, but not enough to base the wild generalisations put about by the Opposition. 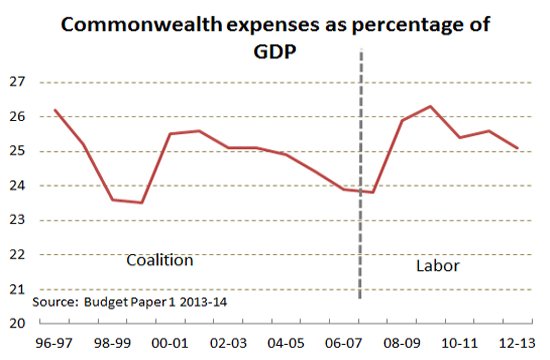 What we notice from this (and from longer time series of public expenditure) are peaks at the time of downturns in the business cycle. The Howard government gave a timely and sharp boost to public expenditure in response to the “tech wreck” at the turn of the century, and the first Rudd government did likewise in response to the GFC.  The Rudd stimulus was stronger than the Howard government’s stimulus, but so too was the severity of the incipient downturn.  Commonwealth expenses, at 25.1 per cent of GDP last year, are now back to where they were in 2002-03 and 2003-04, and are budgeted to fall further.

This short presentation is not intended to exonerate the present Government from criticism. Much of its stimulus spending missed the mark: in retrospect we can see that some of that spending simply transferred private debt to public debt without stimulating the economy.  (The Liberal Party, with its preference for tax cuts over public investment, would have committed the same error.)

Its main fiscal shortcoming was to procrastinate on Treasury’s taxation review – the “Henry Review” – which carried a large set of recommendations designed to make our taxation system simpler, more sustainable, more equitable and more efficient from an economic perspective.  It sat on that report until a few months before the 2010 election – politically a terrible time to consider tax reform – and it rejected or watered-down most of its recommendations.  At the time, writing for New Matilda, I called the Rudd Government’s response an act of “political cowardice”, and was certainly not alone in that view. Had they taken Henry’s advice the post GFC fall in revenue would have been far less severe. Yesterday the constitutionality of one of Henry’s most watered-down recommendations, the mining tax, was affirmed in the High Court.

Back in office Rudd is again pussyfooting around on tax reform, with the pretence that a few incremental changes are all that our tax system needs. Welcome as they are, they do not necessarily strengthen our long-term tax base. For example we would hope that in time there is no revenue from cigarette tax as smoking rates dwindle towards zero.

In justice to Rudd, and in confirmation of Goebbels’ foresight, he knows that the Coalition and the Murdoch media have conditioned the electorate to believe that we pay too much tax and that we live in one of the world’s most heavily taxed countries.  (The truth is that we are one of the most undertaxed developed countries, even accounting for the fact that most of those countries are not raising enough tax to cover their public revenue.)  He knows too that the Coalition, in its suite of “magic pudding” promises, is telling us all that it would cut taxes.

It has been up to Ken Henry, now departed from Treasury, to make the strong point that both Labor and the Coalition are ducking the issue of tax reform. If we are to enjoy a high standard of public goods and services we need to raise our public revenue.  Henry’s is a refreshing contribution, rising above the voices of greed and sectoral interest that have so far characterised this campaign, and it’s a credit to the Fairfax media for giving it such good coverage.

If we had an Opposition worthy of its claim that it is competent to sit on the Treasury benches, it would stop lying and obfuscating about fiscal policy, and criticise the Government for its real fiscal shortcomings – its obsession with the cosmetics of a “balanced budget”, missed opportunities to use its strong credit rating and low cost of finance to invest in infrastructure, and its failure to engage with the community about the need to strengthen permanently our public revenue.