Cambodian voters hit the polls early this morning to vote in this year’s general election.

This is the country’s fifth national election since 1993. In that year, the United Nations Transitional Authority in Cambodia (UNTAC) helped set up and oversee the first election since the reign of the Khmer Rouge from April 1975 until January 1979. There have been large voter turnouts in polling places around Phnom Penh today.

While Prime Minister Hun Sen of the Cambodian People’s Party cast his vote in Kandal province, 15 kilometres outside Phnom Penh, Opposition leader Sam Rainsy toured the city’s voting centres and markets to meet and greet supporters of his Cambodian National Rescue Party. Despite being the leader of the main opposition party, Rainsy cannot stand as a candidate or even vote in the election. He spent four years in self-imposed exile to escape a jail sentence relating to charges many believe to be politically motivated.

His registration as both a political candidate and a voter had expired and he was not able to renew either in time for the election after returning to Cambodia earlier this month. Rainsy received a royal pardon on 12 July and returned to his country a week later to campaign for his party. Despite a strong showing of support for the Cambodian National Rescue Party during the opposition’s campaign rallies, it is widely expected that the Cambodian People’s Party will win the election and remain in power. Voters waiting to check their names on the electoral register in Phnom Penh. Photo by Paul Carson. 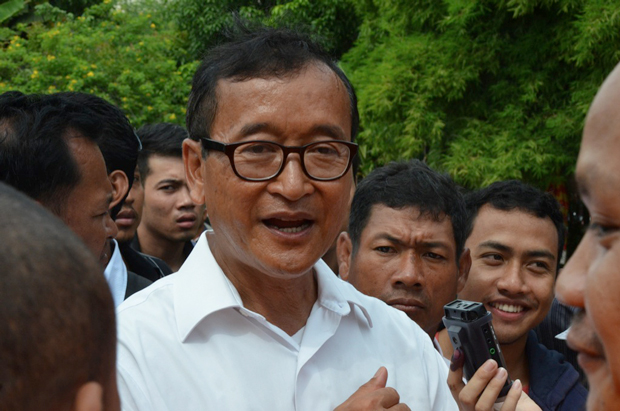 A moto-taxi driver outside the Royal Palace in Phnom Penh showing his ink-stained finger, showing that he has cast his vote. Photo by Paul Carson An election official helping a voter to find her name on the register at the polling station in Wat Botum temple. Photo by Paul Carson