Whatever spin one puts on it, the Prime Minister’s promise to make an early move to an emissions trading scheme is opportunistic politics, but he had little choice. Since 2009 when Tony Abbott, in an unholy alliance with the Greens, blocked what had been a bipartisan commitment to carbon pricing, it has been impossible for the Commonwealth to implement a stable carbon reduction policy. In these circumstances Kevin Rudd has done well to come up with a workable solution.

Businesses, particularly energy-intensive businesses, need reasonably stable policy settings so that they can make long term plans, but by this time in 2014 any of three outcomes are possible, depending not only on the outcome of the House of Representatives election but also on the Senate election. One possibility is Abbott’s abolition of a carbon price and introduction of “direct action” scheme, another is a price of $25.40 (the presently legislated policy), and the third is a significantly lower price set in an emissions trading market linked to the European market – the proposal Rudd will take to the election.

Households too are confused: just when we are coming to accept the seriousness of climate change, and when our resistance to the carbon tax is softening, the Government is promising some relief from its price impact – even though the claims of cost-of-living pressures from carbon pricing are vastly over-stated.

It is grossly unreasonable, however, to blame Rudd for this instability and uncertainty, as shadow treasurer Joe Hockey attempted in an interview on Wednesday morning. The party leaders in the 2007 election – Rudd and John Howard – were both in favour of carbon pricing, as was Malcolm Turnbull who was to became opposition leader after Howard lost his seat. Turnbull has remained a consistent supporter of a market-based approach to climate change, a view he repeated on the ABC’s Q&A program last week, while diplomatically hedging around his clear opposition to Abbott’s “direct action”.

Almost all serious economic commentators and environmental experts are in favour of market-based solutions: the textbook standard is for governments to cap emissions (after all that is the very point of pricing) and to let the market sort out how this allocation is to be made; the second-best approach is a fixed price, as Australia has legislated, in a transition to an cap-and-trade scheme.

In the interests of policy stability and hastening our adjustment to a lowed dependence on carbon emissions, it would have been useful to have kept the original plan of keeping a fixed price until 2015-16, but Rudd had little choice but to pull the plug on (“terminate” is the fashionable term) the carbon tax, for he was facing three almost insurmountable obstacles in promoting it.

First was Abbott’s relentless campaign to “stop the tax”, with his warning that it would “act as a wrecking ball across the economy”, and his blaming every plant closure on the carbon price. If we had a truly independent and professional press, such drivel would have received short shrift, but between the Murdoch bias, and the ABC postmodern commitment to “balance”, Abbott has gotten off very lightly. Even his idiotic statement about a “so-called market in the non-delivery of an invisible substance to no one” has attracted little criticism.

It is fairly clear, as it was when four years earlier he dismissed the science of climate change as “crap”, that he lives in an imagined world where there is no such thing as human-induced climate change, and is effectively generating fear and uncertainty among those who cling to the same illusion.

Second was Julia Gillard’s poor presentation of carbon pricing. She failed to frame it as a commitment to the common good, the approach generally used by governments to rally support for painful measures to counter a shared threat. Instead, with her emphasis on “compensation” (a payment to make amends for a misfortune) she allowed the discourse around the carbon price to be in terms of “what’s in it for me?”, a frame that prevails to this day.

Admittedly carbon pricing wasn’t her idea; it came about as a result of a set of agreements to secure power, and perhaps, with her background as a labour relations lawyer where outcomes are in terms of hard dollar amounts, that is her conditioned way of thinking. We should be thankful that the balance of power was held by the Greens, and not by some reactionary group proposing a return to capital punishment, the White Australia policy or tariff protection.

Third was the collapse of the European carbon market. When our carbon price was introduced, the only large carbon market in the world was in the European Union, where permits were trading at around €15 a tonne, or about $A21 in terms of the exchange rate at the time. The latest price (mid July) is just over €4, or around $A6. See the graph below. 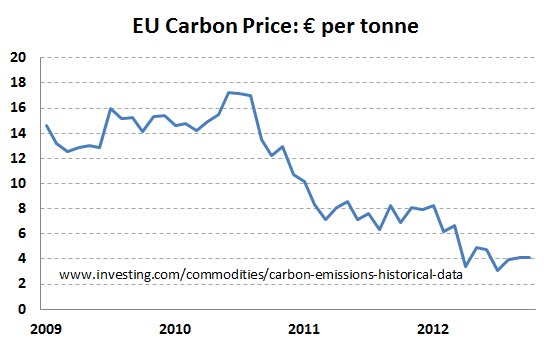 Just why the price has fallen so dramatically is hard to tell. There had been some excess allocation of permits, and the European recession has been responsible for a fall in industrial output and therefore in emissions. Also it is possible that companies have been more responsive in reducing emissions than expected. In this regard it is worth recalling that in the early 1980s, when there was a huge hike in the price of oil, economists were predicting dire economic problems, particularly in Japan, but the price hike promoted a rapid adjustment, particularly in terms of conservation initiatives.

When the European economy recovers, and as excess permits are used up, the carbon price will undoubtedly rise, but this will take time. Alarmist and stupid claims that the price will very shortly rise to $A40 have been bandied about by people who should know better – that was a projection for 2020, made some years ago when the European price was much higher.

For now, however, there is no evidence of a sharp rise on the horizon. It is still unclear what Rudd proposes as an interim price before July 2014 – a determination to be made after the election – but it is likely to be around $6.

This price reduction will clearly come at a short-term cost to the Budget, particularly for 2014-15. Ideally a carbon tax should not be counted on as a source of long-term revenue. In any event, the perceived need to find savings has provided Rudd with an ideal opportunity to reform the wasteful fringe benefits tax concession on motor vehicles provided by employers for private use – a subsidy which has distorted people’s consumption decisions, which has contributed to traffic congestion and pollution, which has resulted in higher car prices for those who don’t have paternalistic employers, and which has provided little support to the local car industry after the finance sector and car importers have taken their cut.

Any well-managed businesses which expects to be around in ten years’ time won’t factor either this carbon price reduction or Abbott’s proposed abolition of carbon pricing into their long-term decision-making. It’s a much safer bet that the world, including Australia, will adopt emissions trading and that the price will rise, than that Abbott will be elected, will be able to get his ideas through the Senate, and will survive as leader of the Liberal Party – a party whose traditional values are much more in line with market-based approaches to public policy than to Abbott’s economic paternalism and technological conservatism.

A lower carbon price will provide a windfall cash flow for one or two years for energy-intensive companies, but unfortunately it will put some of the more forward-looking firms at a competitive disadvantage. Those who claim to speak for the business sector in opposing carbon pricing, such as Greg Evans of the ACCI, speak as if there is some homogeneous “business community”, ignoring the fact that carbon pricing is beneficial for many firms such as Infigen, Hydro Tasmania and Pacific Hydro. Rudd would do well to direct some compensation to such firms until the carbon price returns to a realistic level.

And will consumer behaviour change? As with businesses, those households which have adapted so far by reducing their energy intensity will receive a small windfall – a useful and short-term stimulus in view of the pressures we are facing as the exchange rate falls. And it may contribute to staving off consumer inflation and therefore a rise in nominal interest rates – another likely consequence of a falling exchange rate.

In all, Rudd has made the best of a politically bad situation. It’s not ideal – it would have been far better to have kept the higher price and have hastened the necessary business and household adjustment to higher prices. But if he has managed to protect us from Abbott implementing his economically destructive agenda, leading us to false complacency about climate change, it will turn out to be a good decision.