Just how bad is Australia's deficit problem? According to most of the mainstream media, pretty bad. The weekend papers were full of deficit doom and gloom, with most of the blame sheeted home to a government supposedly living beyond its means.

The Australian Financial Review, for instance, ran a double-page spread which juxtaposed the terrifying upward snake of a budget graph in nominal dollars against a shrieking headline that read “It's the spending, stupid”. The more demotic forms of media have led today with stories about a rise in the Medicare levy. Even the ABC, which really should know better, has jumped on the higher tax bandwagon.

What's causing this outbreak of budget hysteria? An admission by the Prime Minister this week of a further deterioration in tax revenues. Julia Gillard yesterday told an audience of wonks and reporters at think-tank Per Capita that revenue this financial year would be $12 billion less than estimated.

“The 'bottom line for the Budget bottom line' is this,” the Prime Minister said. “The amount of tax revenue the Government has collected so far this financial year is already $7.5 billion less than was forecast last October.”

“Treasury now estimates that this reduction will increase to around $12 billion by the end of the financial year.”

That shortfall takes the cumulative revenue write-down for 2012-13 to $32 billion since the 2010-11 mid-year economic and fiscal outlook. As the graph below shows, the federal Treasury has consistently over-estimated the recovery in tax revenues flowing into Commonwealth coffers since the expected recovery from the GFC began in 2010. 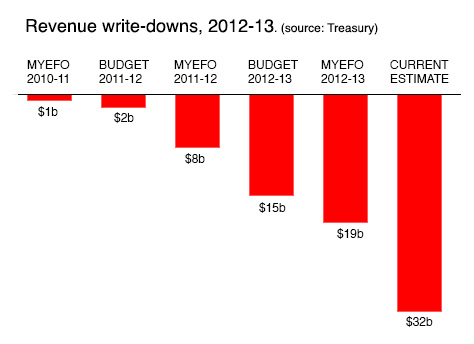 What this shows is that the problem is mainly on the revenue side, not the spending side. Compared with the final years of the Howard government, Commonwealth spending remains at roughly similar levels as a percentage of the economy. As we've consistently argued here at New Matilda, the reason the Commonwealth is in “structural deficit” is that we simply don't collect enough tax to pay for the government services citizens demand.

The problem is, in the dying days of this administration, no-one wants to give Labor any credit for spending restraint. If the budget is in deficit, it must because the government is spending too much. No matter how many graphs Julia Gillard and Wayne Swan throw at us, the narrative that Labor can't manage the economy retains its tenacious hold.

As is usual with Labor, matters have not been helped by a series of own goals. The most lamentable example was the ill-fated promise to return the budget to surplus. By investing so much political capital into the notion that it would return the budget to surplus this year, the Government effectively conceded the Opposition's point that the budget balance is the key measure of economic management. It could have been a triumph of bold policymaking. The tax revenues didn't eventuate, and now Labor has egg on its face.

In fact, as events in Europe are conclusively demonstrating, the crude fact of the government's budget position is but one element in a complex set of economic considerations, and not even the most important one. The most important factor in driving government tax revenues is the overall health of the economy — improvements in productivity, growth and the like. If these indicators are weak, taxes take a hit, and the budget moves into the red. In times of growth, tax revenue rises, and a prudent government can deliver surpluses and pay down public debt.

That, broadly, is what Swan and Gillard are doing. It's just that tax revenues are not returning to health as quickly as hoped. The reasons are much canvassed, and include big carry-forwards available to mining companies in return for infrastructure investment, the poor design of the mining tax, weak corporate profits in the non-mining economy, and too many income tax cuts in the Howard and Rudd years.

There's no doubt that this government could responsibly cut spending, by the way. The place to do it is most obviously in tax expenditures, which are the special tax breaks given to certain sectors of the economy. These exemptions are distorting and regressive, because by carving a special tax break for a particular activity, they place an unfair burden on everyone else who doesn't enjoy such luck.

Collectively, they're worth more than $100 billion. Superannuation tax breaks are worth $30 billion, and rising quickly. Capital gains tax exemptions on the family home are also worth around $30 billion. Negative gearing for landlords is another measure that costs billions and appears to actually harm the economy, by driving rents up. The mining industry currently enjoys around $3 billion in fossil fuel subsidies in the form of the diesel fuel rebate.

Could some of these tax expenditures be addressed? Of course they could. The Henry Review, commissioned by the Rudd government, recommended a raft of reforms in 2010 that would have shored up Australia's tax base. Mining taxes, negative gearing and capital gains were all in the mix.

As we know, very few of Ken Henry's ideas were ever implemented. The one big idea that Labor did try to run with, the mining tax, led to a savage attack campaign from the industry it sought to tax. Similarly, when Swan recently announced very modest tweaks to superannuation tax breaks, a storm of media and industry criticism erupted. Tax reform is politically difficult, to say the least. Just ask Rudd or John Howard.

Our airwaves have recently been filled with pundits and media economists like Chris Richardson decrying the spendthrift ways of our political leaders. But take a couple of steps back from the current debate for a minute, and a certain clarity starts to emerge.

The real structural deficit is not so much between taxing and spending, but rather between the electoral incentives in a modern democracy. Politicians of all stripes seeking to balance the books these days are caught in a difficult bind. Handing down deficits is never a good look. But the alternatives can be even worse.

The vicious reaction to Labor's modest and economically prudent tax increases in the form of the mining tax and the carbon price shows just how hard it is to introduce new taxes in the current environment. Cutting services is also unpopular, as the Newman government is Queensland is finding.

But what really matters for the health in the budget in the long run is the strength of economic growth. A deficit this year  of $15 billion is around 1 per cent of our gross domestic product of approximately $1.5 trillion. If the economy grows more strongly over time, that is by far the best way to increase the long-term budget balance.

And the best way to increase economic growth is to lift productivity, particularly the productivity of our labour force, by skilling up our workforce and bringing hitherto excluded members of the population into gainful employment.

It just so happens that Labor has two policies currently aiming to do exactly these things. The Gonski schools reforms aim to improve the performance of the schools system particularly the bottom half of it. The National Disability Insurance Scheme aims to lift productivity by bringing new workers into the economy. They are both expensive, but the government is finding at least some spending cuts and savings to help pay for them. In these two measures at least, as partial and as compromised as they are, the government really is thinking about the long-term.

Fairfax's Tim Colebatch wrote a compelling article today in which he lamented the economic illiteracy of much of the deficit coverage. “In the end, it's not the deficit that matters,” he wrote. "It's the economy.” The truth is that, under Labor, the economy has performed very well.