The federal government has blamed a power outage in South Australia on renewable energy, not a major storm which hit the state. Ian McAuley is still scratching his head.

August 14, 2003 was a hot day in northeast USA. By late afternoon demand for air conditioning was placing a heavy load on the region’s power lines.

When the weather is hot, and when power lines carry a high current, they heat up and sag. They risk touching trees, shrubs and grass, causing a fire or short circuit (sagging and contact with vegetation has almost certainly been the source of Australia’s worst recent bushfires).

On that afternoon, in Ohio, some trees came in contact with a high voltage power line. The safety systems on that line caused it to shut down, automatically shifting the load to other lines. Those lines subsequently became overloaded and their safety systems shut them down, in a rapidly spreading system-failure.

Within 30 minutes there were widespread blackouts in eight northeastern US states and in Ontario, Canada, affecting 50 million people. It was not until the next morning that power was restored to most places, including New York City, and some remote communities were not re-connected for a week.

What happened in South Australia yesterday was similar, but on a smaller scale.

Barnaby Joyce hastened to blame the blackout on South Australia’s strong dependence on renewable energy, but such a failure can happen in any large-scale power system, regardless of the source of power.

South Australia’s blackout resulted from an extreme weather event – an unseasonal intense low pressure system, bringing high rainfall and 100 kph winds. The situation just as the storm hit Adelaide is shown in the Bureau of Meteorology weather map below. On ABC radio Commonwealth Energy Minister Josh Frydenberg, while showing more caution than Joyce, described the storm as a one in 50-year event, but that’s to downplay the seriousness of the situation: with global warming such extreme weather events are becoming more common, and they don’t conform to historical patterns.

The storm knocked out three transmission towers in the state’s mid-north. Even if South Australia had kept its brown coal-fired power station at Port Augusta in operation, the transmission line failure would have rendered the power station useless. Joyce would command a modicum of credibility if he were to look at a map before he spouts off on one of his anti-renewable energy rants.

We can expect a lot more partisan comment about South Australia’s blackout. Frydenberg was right when he said we have failed to coordinate climate change and electricity generation policies: the Grattan Institute made the same point in relation to the South Australian power problem in July, when prices shot up to $9000 a MWh. But Frydenberg couldn’t resist mentioning the supposed high cost of renewable energy.

The idea that renewables are expensive is a convenient myth, but the reality is different. We have experienced a strong rise in electricity, but renewables aren’t to blame.

The graph below shows electricity price movements over the last 35 years, and it’s clear that the big rise occurred well before the Gillard Government introduced a carbon tax – which, because of obstruction by the Coalition parties, didn’t take effect until 2012. 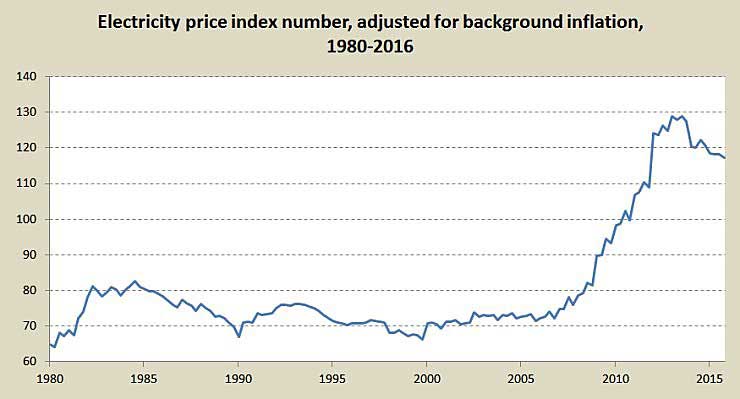 That rise associated with the carbon tax is evident in the jump in 2012. But it should be noted that although prices fell when the carbon tax was repealed, they have not returned to pre-carbon tax levels, and are still well above the prices that prevailed from 1980 to 2005. To show this more clearly the second graph below is an amplification of the last five years of that data. 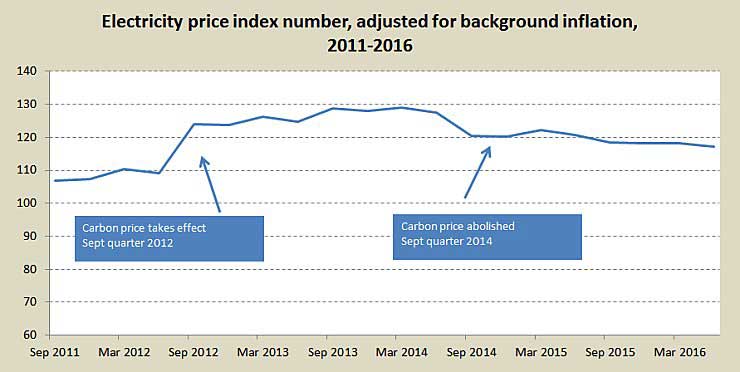 In fact, the cost of generating electricity is only a small part – generally no more than 30 per cent – of what appears on the consumer’s electricity bill. The rest of the cost is incurred in distributing electricity through power lines, transformers and switching stations, and in “retailing” – a bureaucratic process carried out by intermediaries (who have almost nothing to do with electricity) who buy electricity on the spot market and re-sell it to us.

The main driver of those high distribution and retail costs has been privatisation. Being a natural monopoly, the privatised and corporatised distributors are regulated, but the regulating authorities – The Australian Energy Regulator and its earlier state counterparts – have allowed the distributors a very high return on capital (that’s why privatisation of the NSW grid was so attractive to Chinese investors). And as for the comparatively unregulated “retailers”, they behave like any other financial intermediary, taking a cut of the funds passing through their hands and adding very little value along the way.

Frydenberg didn’t mention these costs, however. To do so may lead us to think about the costs of privatisation. Instead, in that ABC interview, he referred to generating costs, saying: “We have to put a priority on energy security and, dare I say it, energy affordability, because wind and solar is about $100 a megawatt hour to produce, whereas coal is around $50 and gas is around $80. So there are differences there.”

But those figures severely understate the cost of coal and gas, because they fail to account for environmental externalities – mainly global warming – associated with those fossil fuels.

Accounting for these external costs, which would be captured in any proper pricing regime, would add at least another $40-$50 for coal and $20 for gas, putting them on the same cost basis as renewables (which are rapidly falling in price).

Had not Tony Abbott (“climate science is crap”) scuttled bipartisan action on climate change in 2009, when he deposed Turnbull as then Opposition Leader, we would not have wasted seven years without a climate change policy. We could have been planning for the transition to renewables with stronger interconnectors and a geographical spread of wind and solar resources to make them more reliable.

Getup’s Homegrown Power Plan, for example provides a realistic and economically robust model of what a renewable plan would look like.

An attraction of such a model is that once implemented, with a combination of large-scale geographical balancing and local systems using small and intermediate-scale wind and solar generation, with battery technology for storage, is that it is far less vulnerable to the sort of runaway system failure that struck northeast America in 2003 and South Australia on Wednesday.

The lesson we should take from that event is that if we want reliable and reasonably-priced electricity, we should hasten the transition to renewables.